A Lawless Attorney General, Democrats mouthing Talking Points, and an Unprincipled MSM/OMG Conspire to Protect an Incompetent Executive Branch | Beaufort County Now | This presidency, his pathetic staff, his inept cabinet and their respective departments, and, finally, his accompanying mainstream media are rotten to the core: But how can a nation save itself from itself when it is not smart enough to consider the question?

Login to Send a Private Message to Stan Deatherage
The national nightmare continues; but for how long?

This presidency, his pathetic staff, his inept cabinet and their incompetent respective departments, and, finally, his accompanying mainstream media are rotten to the core: But how can a nation save itself from itself when it is not smart enough to consider the question?

Too harsh? Too cynical?

Not so much; not when one considers the grand lies and accompanying hypocrisy of this president, his cabinet, his worshiping yet dimwitted Democrats in congress, and the pathetic, unprincipled MSM (mainstream media). They work in league with each others' associative needs, like a grand synchronized ballet of the bizarre, one codependent upon the other as if they are a collectively mobile 'house of cards', and to fail as a moving unit would be untenable.

It is as if they are living this giant lie, as if they all know its intricate nature of untruths, and are agreeable to its telling and re-telling as if it could be a real truth for their community psychosis to survive, and even thrive. Or, could they all be collectively this stupid? 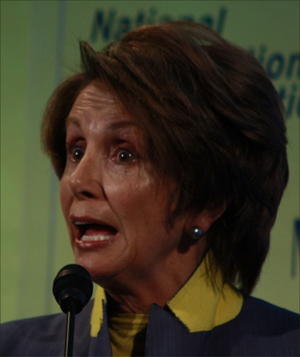 Former Speaker Pelosi, at a nonpartisan event, speaking substantively to her low-information base: Above.    photo by Stan Deatherage
Yes, in the sense that the Democrat base is one that seems to have a good deal of free time on their hands; however, they generally, in a collective sense, still don't spend much time learning stuff, the kind of stuff that gives the rest of us the perspective to make rational decisions. Remember Jay Leno's 'Jaywalking', where he would ask strangers simple questions that these low-information people could not answer; the same with Jesse Watters' "Watters' World" - simple questions, few correct answers. If these people do vote, and let's be clear about this one truth: Democrats are outstanding at getting low-information people to the polls; they vote Democrat.

This tragically low-information electorate generally vote for 'hope' and 'change', or just more free stuff; and they generally expect their politicians to mouth the party line whether it makes sense or not. This pretty much explains how vapid elected Democrats to congress apologize ad nauseam for the behavior of Republicans, as these more principled lawmakers attempt to get to the bottom of the Benghazi cover-up, the IRS targeting scandal and cover-up, and more, so many more. While one, with a full working brain, might question why a politician would carry the political water, so enthusiastically - for an over-reaching, out-of-control IRS, and so many more scandals affecting this phony president - one must wonder: How did these mental midgets ever made into office? 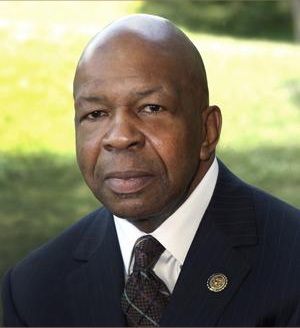 Maryland Representative Elijah Cummings is just one of the apologists for Democrat Bureaucrats, and their president, and has no interest in discovering the truth if it reflects poorly on either.
Watching political light-weights, like former Democrat Speaker Nancy Pelosi, stammer through complex issues, with no real working knowledge of how our Republic actually works, alternately humors me and then scares Hell out of me. On one hand, I find great fun in the abject stupid words that she, and fellow Marylander (Nancy is from Baltimore), Ranking Member of the Oversight Committee, Rep. Elijah Cummings (must be some taint in that Maryland water - at for leading Democrats) stumble through long winded apologies to petulant bureaucrats, many of whom are being found out to be lying to congress while on the people's dime, while on the other hand, really jangles my pure political nerve, but these are their Democrat Talking Points, and their low-information base buys it.

This entangled collectively mobile 'house of cards', protecting a dishonest and woefully incompetent president, demands the essential component of an unprincipled mainstream media. Never in the modern history of this nation has an incompetent journalism class of Obama promoters failed to investigate so many scandals.

For this 'Obama Media Group' (OMG), who would have already played an important role in the Impeachment of any similarly lawless Republican president, have passed on any real journalistic investigation on: Stimulus Package that became a Democrat slush funding for fake comapnies' 'greenjobs', like Solyndra; the former EPA Director Lisa Jackson's unfair targeting scandal and cover-up; lawless mismanagement of immigration and the borders which has caused the Summer, 2014 influx of unaccompanied children; the Benghazi debacle, mismanagement of message and resultant cover-up; Eric Holder's incompetence (Fast and Furious, Black Panthers' voter intimidation) and dishonesty (perjury), but allowed to remain head of the Justice because he is Black and Obama's 'legal muscle'; Obama's lying to the American People over ObamaCare and its lawless implementation; Veteran's Affairs mismanagement after campaigning on the department's overhaul ... twice; and the grand-pappy of them all - the IRS targeting of political enemies, the intricate cover-up, and lying of IRS officials, with the lawless Eric Holder maintaining a hands-off policy. And through all of these scandals, and these are just a smattering of this lawless president's injustice upon this Republic, the OMG, formerly the MSM, will not investigate, and accurately report this chief executive.

But why the MSM's long recognized hands-off policy regarding Barack Hussein Obama?

It's simple: The OMG is totally invested in first Obama's success, and now just his continuance, and the uninvestigated history of the Obama presidency will rest on these journalists' unprincipled, simple heads, like a never ending nightmare that will forever discredit them, and their collective profession, those who shy away from knowing the truth of their 'transformational' hero.

Furthermore, these pathetic journalists will not write the history of these times, none that reasonable people will recognize. Irrespective of their presumed 'power of the pen', their abject sophistry just will not withstand the future crushing weight of the true accounts of Obama's Executive Branch's complete incompetence.

At the crux of this sorry ongoing matter is that the partisan journalists, the sophistic Democrats in congress, and the compelling incompetence of the executive branch all depend on the low-information electorate. Polls suggest that currently 85% of all Americans believe that over 50% of their fellow Americans have little command of knowledge, and are of a low-information nature. Interestingly, if one deduces the math of the matter: overly 35% of Americans, who consider others poorly informed, don't even know that they are an active part of the low-information amalgamation. That is the nature of the low-information voter: They just do not know stuff, even about themselves.

Core Democrat politicians, and the OMG (overly-partisan journalists as the Obama Media Group) need these 'sheepPeople' to further their cause of a transformed America. This low-information electorate questions little, and if properly motivated, well do what they are told. They are the Americans that least can afford an incompetent government, that the Democrats now, and have long own(ed) two thirds of (presidency and the U.S. senate), but because of this electorate's limited knowledge are the perfect dupes to keep this horrible 'house of cards' standing. So far, while not astute to their plight, are good soldiers to the ill-begotten future fate of our nation. Such is a democratic republic.

Currently, the lowly-informed are being 'ginned-up' to confront a possible Impeachment of this incompetent president. This possible scenario is presently being fomented by Barry O., and his inner circle, as The Candidate campaigns constantly rather than attempt to do his job of governing. One cannot be Impeached for being egregiously incompetent, of which The Candidate well qualifies for; however, one can be easily impeached for breaking the law, or knowingly choosing to disabuse themselves of their oath to 'preserve, protect and defend' the U.S. Constitution. One has to expect that Mr. Obama knows in his heart that he is guilty, thereby commanding his minions to be getting out ahead of the impending possibility that he could be impeached, should the Republicans gain the U. S. Senate in sufficient numbers. In this regard, Candidate Obama may be wise to use it as a fundraising mantra and tool.

Understandably, this phony president as the fulcrum to all these "phony scandals", does attract the proper attention; the question is: Will the Republicans in congress have the stomach for what is necessary?

The 'first domino to fall', after that possible fateful November election, would be the Impeachment of the lawless Eric Holder - Obama's 'legal muscle'. That is the way it all transpired for President Richard Nixon, when Attorney General John Mitchell resigned, and then was prosecuted in the Watergate scandal. Eric Holder will probably not resign, so Impeachment will be necessary, should a majority of Republicans in the United States House choose Impeachment after these November midterm elections.

Regardless of one's perspective of political purpose, we all should know this: Any nation brave enough to elect its first 'Black president' can be bold enough to enough to Impeach him. This will be a pivotal midterm election. I suggest that all pay attention to the true story afoot - the lowly-informed and the 'Obama Media Group' a like.

poll#51
Considering Mr. Obama's chronic incompetence in making important decisions, moreover of late, those that would keep Americans safe: Is he competent to serve as president for the duration of his term?
3.56%   Yes, I am enamored with this 'transformational' man.
95.85%   No, the man should be removed from office before he does anymore damage.
0.59%   I only know that I was hauled to the polls to vote for him.
337 total vote(s)     Voting has Ended!
Go Back