The Turnage Theater in Images: a Retrospect in Melody - Chapter III | Beaufort County Now | Additionally, all photos for this article have never been published prior to this post.

The Turnage Theater in Images: a Retrospect in Melody - Chapter III

These chapters of the Turnage Theater, in retrospect, in these rare images offered below, are in chronological order, and if you do not see a show that your were particularly fond of; please, be aware of this one policy of mine - I did not publish images of every performer, only the ones I rather enjoyed. My mother made a deep impression on me: "If you can't say anything nice, don't say anything at all." Additionally, all photos for this article have never been published prior to this post.

Both music acts, listed below in images, played the Turnage Theater on the same night, April 9, 2010. When my wife bought the tickets for the show, I had no idea what she was getting us into, in fact all of us, because she purchased six tickets - one for each member of my immediate family. I had never heard of Holy Ghost Tent Revival, and certainly, I had never heard of Lipbone Redding and the Lipbone Orchestra.

When the two-shows-for-the-price-of-one was over, we had all had a good time, and I was the better for it, especially the Lipbone show. Up to this show, and for whatever reason, the Turnage Theater folks had not booked many Soul acts, none that I was aware of anyway; however, Lipbone and his remaining trio may have well provided some insight into how a tight rhythm and blues band can supply the welcomed Soul sound. 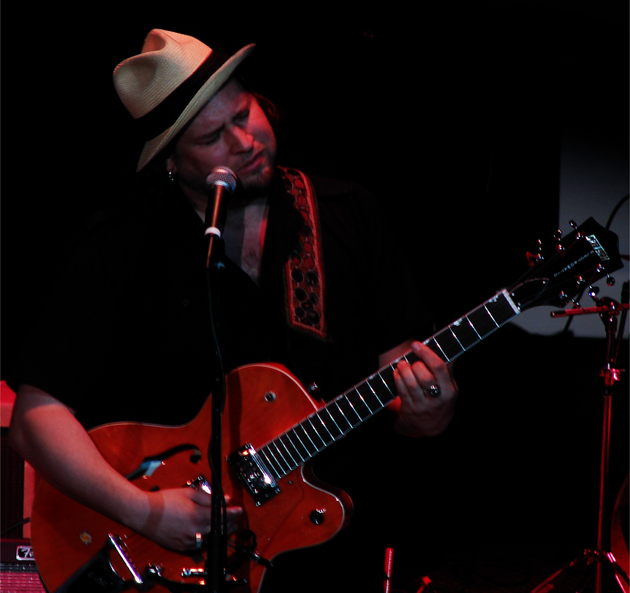 Lipbone of the Libone Orchestra fame playing his guitar, his strange lip-trombone, and singing his white boy version of Rhythm and blues, bordering Soul music: Above and below.     photos by Stan Deatherage 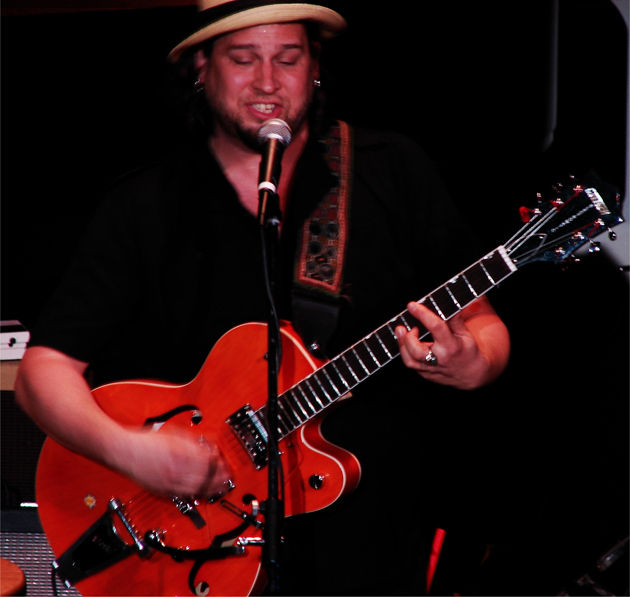 Some time later after Lipbone's rather uplifting show, discovered that Lipbone himself - the man who possessed the distinctive ability to play the lip-trombone - was actually a local, by way of New York City. Even Stan Deatherage (Beaufort County Commissioner) said that Lipbone's father was one of his constituents. Small world, huh.

Fortunately, since there were local ties, I would have the eventual opportunity to see Lipbone and his Orchestra once again at the Turnage Theater. 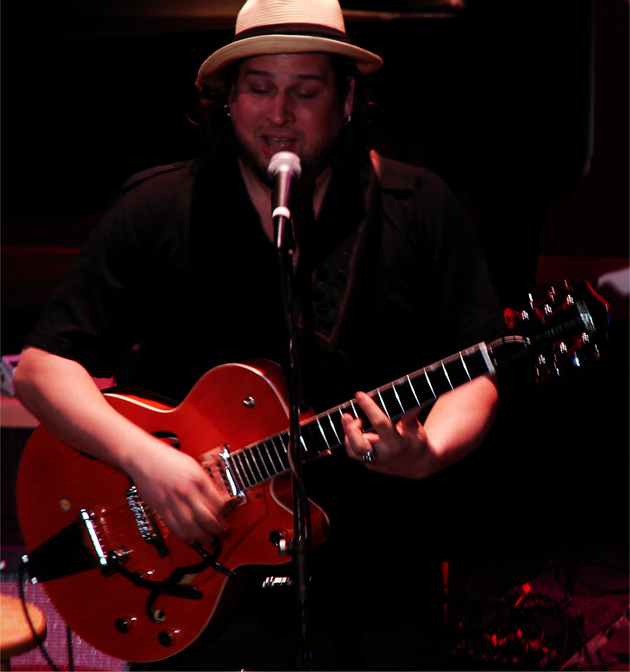 Formerly known to some locals as "Citizen One," Lipbone is in the house: Above.     photos by Stan Deatherage

The second show that night was Holy Ghost Tent Revival, and they were the personification of eclectic. They played of rare blend of high energy, stop and go, rag-time, rock'n'roll that bought many of the audience members our of their chairs, and sent some of the grayer headed folks home early.

Fortunately, I have a rather wide berth in my acceptance of what passes a decent music, so I did enjoy the show. It was like nothing that I had ever experienced before, so I was pleasantly surprised. 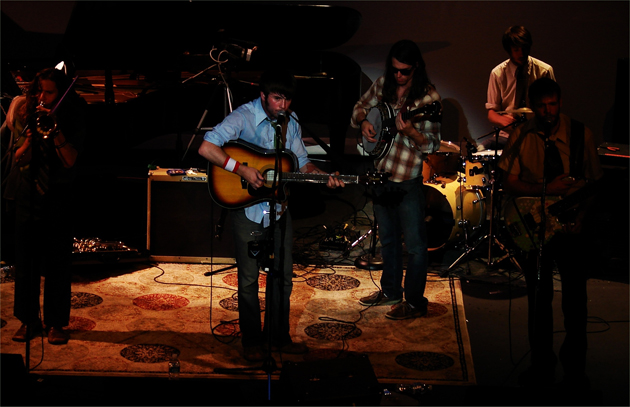 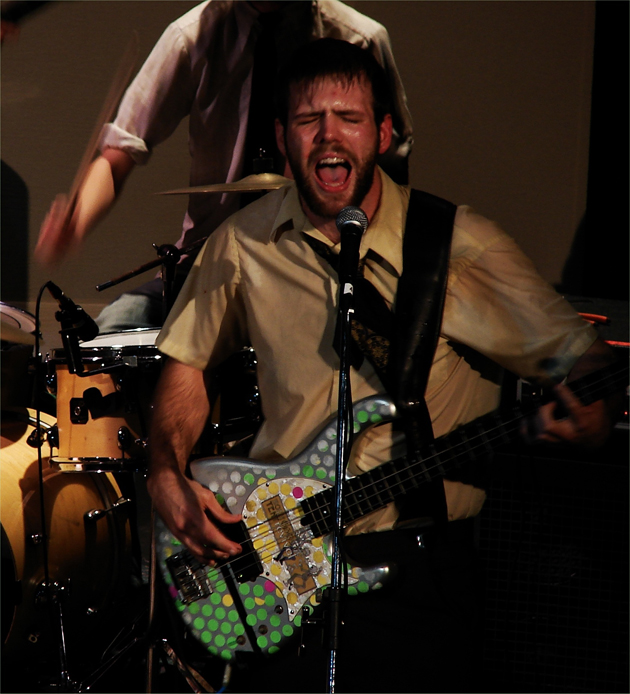 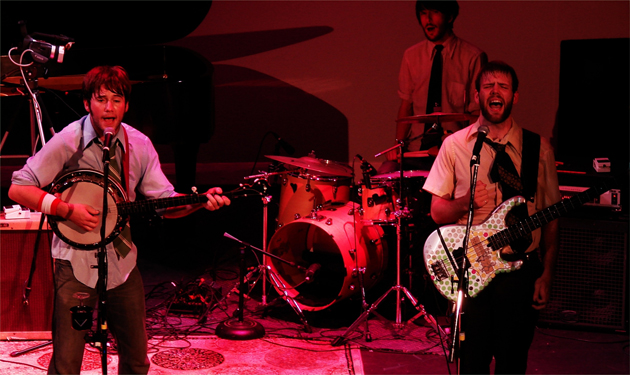 The one thing that an audience member was made supremely aware of is that every band member sang, and every band member danced and jumped a bit: Above. I just had to use this picture where Hank Widmer on trombone was quite clear and in focus, while Stephen Murray and Matt Martin abruptly launched into a dual jumping rampage. A camera, set on a slow shutter speed in a semi-dark theater, can only accomplish so much: Below.     photos by Stan Deatherage 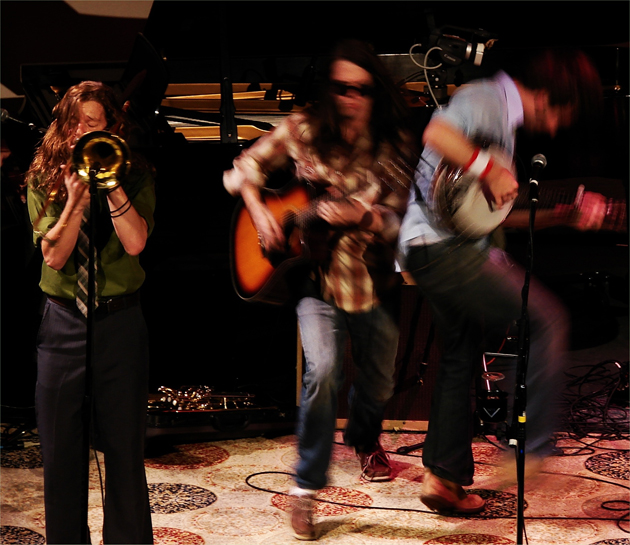