High Fiasco for Some, Bop to you Drop for Others ... | Beaufort County Now | The Holy Ghost Tent Revival put on an outrageously good show, but it wore out some of the older members of the audience ... from the start.

High Fiasco for Some, Bop to you Drop for Others ...

Login to Send a Private Message to Wyatt Sanderman Day
And still I found the Holy Ghost Tent Revival, hailing from Greensboro, North Carolina, an enigma. Was it the music, or their stage presence - a high octane jump and dance competition, where all of the band members finished in first place - that forever colored my opinion? I don’t know.

The one thing that I do know is that their music suits their antics, and their antics were maddening in the sheer force of their constant energy in the second show of the first night of the Beaufort County Traditional Music Festival held at the Turnage Theater in Washington‘s Downtown Historic District. 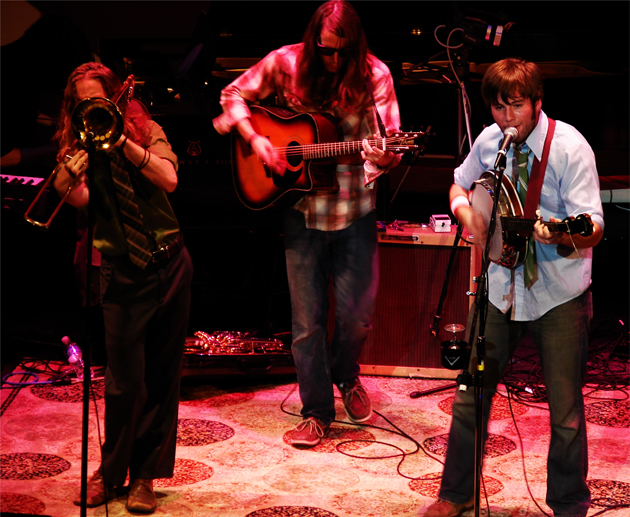 The 2nd Annual Beaufort County Music Festival is a weekend of mostly traditional music (mostly bluegrass, country, blues) at various locations downtown on Main Street and along the waterfront on Stewart Parkway, and this year; two shows Friday and Saturday night at the Turnage Theater. This first show was the eclectic Lipbone Redding reviewed earlier by our publication.

Speaking of eclectic, the Holy Ghost Tent Revival took up where Mr. Lipbone left it - right on the weathered boards of the Turnage’s big stage. And as dramatic in verse and melody as the band was, they were just as irrepressible in their energetic approach to telling their stories of constant mayhem, lost affection and other sad tales of unrequited love. I do believe a good many of their revved up sour note melodies, by their original verse and melody, involved drinking. I know after my nearly two hours of time spent with these rabid ragtime ragamuffins, I also needed a drink - or two. And this is no slight, because I liked this young band, and I have enjoyed their CD, “So Long I Screamed,” which we purchased after their show, but these hop'n and bop'n boys revved, and then nearly plum tuckered me out. 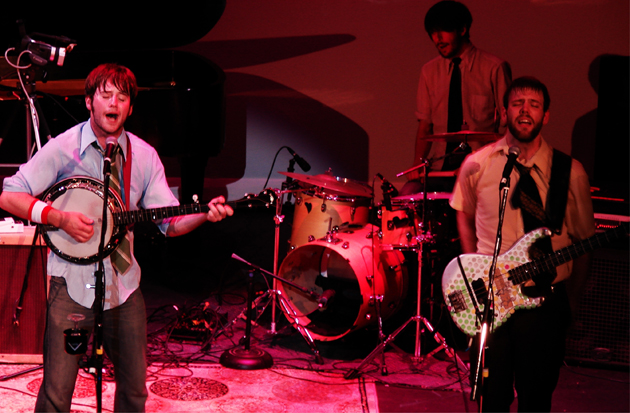 Notice that Patrick Leslie (right), and Ross Montsinger behind him on drums, have ceased to enable their instruments, but are now laying in the group vocals that will surely lead to yet another manic expression of melody. Matt Martin keeps strumming his banjo that, on occasion, sounds like a ukulele.

The compact disk, like their show, was a palpitating experiment of how much of themselves, and their artistic blood and guts, they can pack into their song, their show, and live to tell about it. After their show at the Turnage Theater, I do believe they left a bit of their artistic blood in the boards of the Turnage. If not, they sure left a good bit of their sweat, and I can not help but wonder how much of that corporal essence was left upon that storied stage. When I remarked that none of these hyperactive band mates could ever have a weight problem, the little trombone player, Hank Widmer, expressed to me that bass player and vocalist, Patrick Leslie, was once a 300 lb. rugby player. Yeah, and he may be now 180 lbs. clothed and dripping wet … with perspiration, of course.

And while it may be their pure zeal, their zest for their craft that first captures ones attention, I, moreover, became intrigued by their totally unique approach playing their ragtime jazz / rock fusion that in their compositions is best played from slow to fast to faster. At times during the show that night, the staccato tempo of the band’s music was akin to a colorful carousal of rich, diverse and eclectic melodies spun together and spinning fast, and then faster and yet faster until one cannot discern if it will be you, the participatory audience, or them, the manic music makers, who will be tossed and flung from the ever whirling dervish of the carousel into the far reaches of the vast unknown. 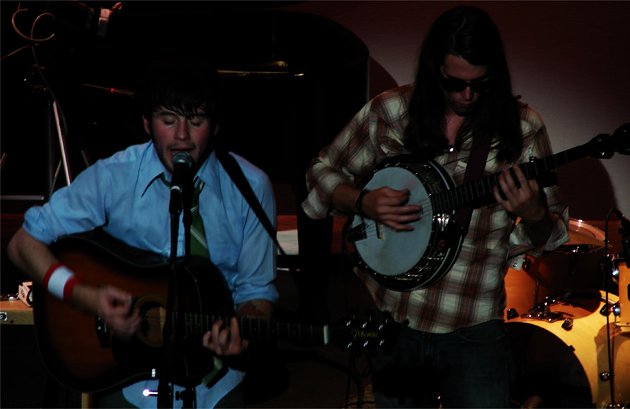 Matt Martin does a good bit of the lead vocals and in this image is playing the acoustic guitar, with Stephen Murray picking some rough notes on the banjo: Above. In this image Matt picks up the banjo and strums in hard rhythm, while Stephen (left), and Patrick Leslie on bass and Ross Montsinger on drums get cranked up for a romp'm stomp'm finale to yet another one of their tunes played at their trademark break-neck speed: Below.     all photos by Stan Deatherage 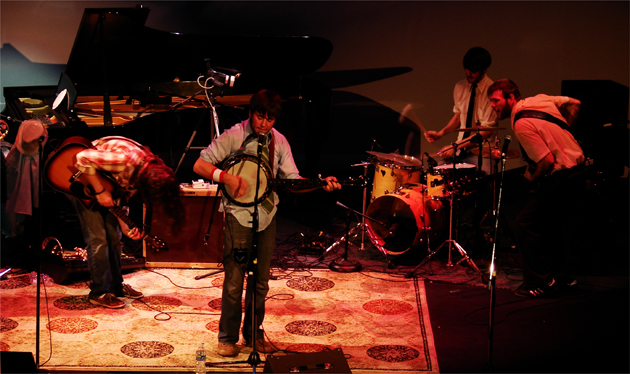 As one can imagine, many of the older members of the audience beat a hasty retreat from the Turnage, with the remaining younger members and some of us older, but younger in musical tastes and energy, left to experience the rest of the show. Remarkably, it was well worth the endurance, and the boys from the Holy Ghost Tent Revival could push forward with lyrical dramatics, then we were bound to hang in there with the boys: Stephen Murray - banjo and guitar, Matt Martin - guitar and banjo, Hank Widmer - trombone and euphonium, Patrick Leslie - bass, Ross Montsinger - drums, Mike O'Malley - keyboards. They all sing. And their unique vocalizations are so reminiscent, in many respects, to the classic bands of my generation: The Grateful Dead and The Band.

These eclectic harmonies, the ragtime melodies, with classic traditional instruments: acoustic guitar, banjo, trombone, grande piano and euphonium helps to blend the Holy Ghost Tent Revival, into a rich alchemy of the days of music past with dance steps of music present. They worked it out hard, really hard, and sent the remaining crowd home happy. It was a good show - time and money, for the price of a ticket, well spent.