Obama Doubles Down on Stupid

Login to Send a Private Message to Stan Deatherage
The world is turning upside down, "but let's not involve the Millennials with any of that, let's do YouTube, and talk goofy to unremarkable people to seem cool. That will get us more votes with these unsophisticated kids, right?"

Since early November, it has been a quantifiable losing streak for Amateur Obama, and The Amateur ain't helping with the perception of it, not in the least bit. After the midterm elections, when Obama's policies were weighed and measured and found wanting, he elected to sharpen his best stick, then publicly gave the Republicans, a good poke in the eye, every chance he got and gets. This is how the amateur politician practices bipartisanship: He first tells the Republicans that their historic sweeping election does not matter because his people did not come to the polls, and he can prove that; then he promises vetoes for the new Republican legislation to anyone that will stop long enough to listen.

The Amateur Obama playbook has not changed much from whence he took office. His take no prisoners approach to politics, irrespective of the odds against any reasonable posture, is even bolder now, even while some Democrats and even more squishy Middlecrats are wiping the intoxicating ooze from their eyes to see more clearly the path The Amateur that has led them, who is proved to now be losing our nation in great, sweeping strides. With Iraq lost, Benghazi lost, Yemen lost, Syria lost, and Afghanistan near lost, Amateur Obama somehow believes that we are doing just fine against the "violent extremist" 'kinda' threatening America right now. At least that was part of The Amateurs sophistic comments to congress in his 2015 State of the Union Address.

Furthermore, you, the People, beg for congress to work with the executive branch to correct the blatantly apparent, systemic problems plaguing this nation, and it ain't gonna happen. Do you want the Amateur-in-Chief to protect this nation, our core values, most notably our freedom; Barack Hussein Obama can not even name who our enemy is? How does one declare to win a war, when they can not declare who the enemy is?

To put it more succinctly: How does one rally the home front, build a coalition of impassioned allies when the face of the enemy is a mosaic of ambiguity?

Such is the war footing of The Amateur. It is a footing that leaves us vulnerable, and as the millennial generation, who are accepting of far too much, race to be "Liked", accepted, and ultimately wholly unknowledgeable about so much: How will the 'Leader of the Free World' prepare them for a threat from those that are not "War Weary", and is more than ready to savagely claim these young immature, naive Americans as their greatest prize, as duped converts or dead.

With a succession of Obama-like Commanders-in-Chiefs, I see America unprotected, in disarray, where war will not only be over there in the barren lands of the Middle East, but in Muslim drenched Europe, and here in America, where targets are the softest, where Americans are the most unready, and even unwilling, and ultimately incapable of striking back, or even protecting themselves and their families.

Think about this reality of the last two weeks regarding Amateur Obama and those he represents. When, on short notice after the Paris terrorist attacks, there was that moment to rally over 40 leaders of the free world to gain more of a war footing to confront the inevitable evil that is coming to our front door, through the planned porous borders of Obama's America, he was off-the-clock, and could not be rallied 'to seize the day'. When the day after The Amateur delivers a State of the Union that was little more than a Democrat Pep Rally, and actually for the most ardent Liberals of their base, he learns of Israeli Prime Minister Benjamin Netanyahu to speak to congress about his grave concerns over the abject turmoil in the Middle East, The Amateur plans to snub the Mr. Netanyahu ... again, but finds time to meet with YouTube sensation GloZell Green, and others, and, incredibly, Liberals brag about how The Amateur intrinsically knows how to reach today's youth. Liberals and the OMG are classic enablers to make and keep a permanent Stupid Class in America to vote Democrat, as the Democrat's president, the most divisive in modern times, promotes class warfare to further his/their liberal sensibilities. 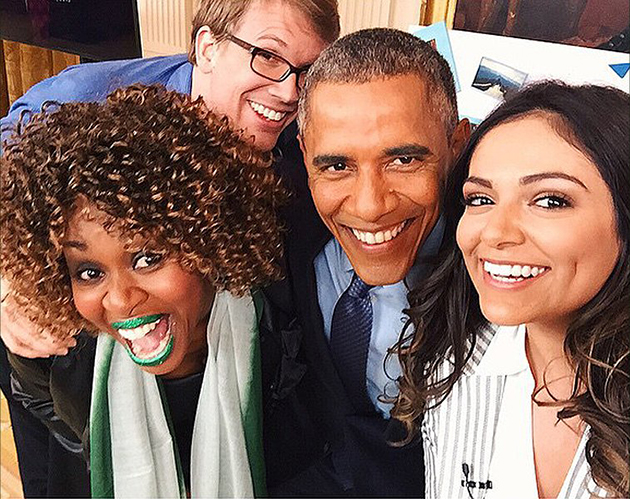 From left to right: GLoZell Green, Hank Green, President Barack Obama, and Bethany Mota. This is how you fill your day when you pass little legislation, threaten to veto much that will come your way, while the "J.V. team" is knocking at your door, and world leaders go wanting.


Once again Barack Hussein Obama, AKA The Amateur, doubles down on stupid to govern in these critical times - the American public and world leaders be damned. While there is serious work here to protect our people and ave the Republic, The Amateur goes off-the-clock, and when he is playing president, he: turns State of the Unions into Pep Rallies for mush-minded Liberals, meets with sports teams, still campaigning and does YouTube interviews.

And you know what is really strange: When some of you read this, I, and other Conservatives, will be the bad guys here. Actually, for those of you who feel that way, you should be ashamed of yourselves for being so damned stupid. My suggestion here: Smarten up ... and fast! There are bad years ahead of us if we do not deal with our nation's problems, and remember this: Facebook and YouTube will not save you.


Here below is the infamous YouTube video between The Amateur and GLozell - the milk-swimming-in-the-bathtub-for-breakfast phenom: Below.

poll#62
In this new year of possibilities: What should be our greatest concerns?
1.57%   Rapacious cries of Racism by the classes of White/Black Privilege's keen sense of entitlement.
95.28%   The abject evil of Satanic murderous Muslims bent on the destruction of Jews and Christians.
3.15%   Global Warming, or is it Climate Change ... or is it Climate Disruption now?
127 total vote(s)     Voting has Ended!
Go Back