"Helluva Vision"
How could I have not known that Lonesome Dove would arguably be the greatest pure Western of all time? Maybe because it would premier on television is why I paid so little attention to the 384 minutes dramatic 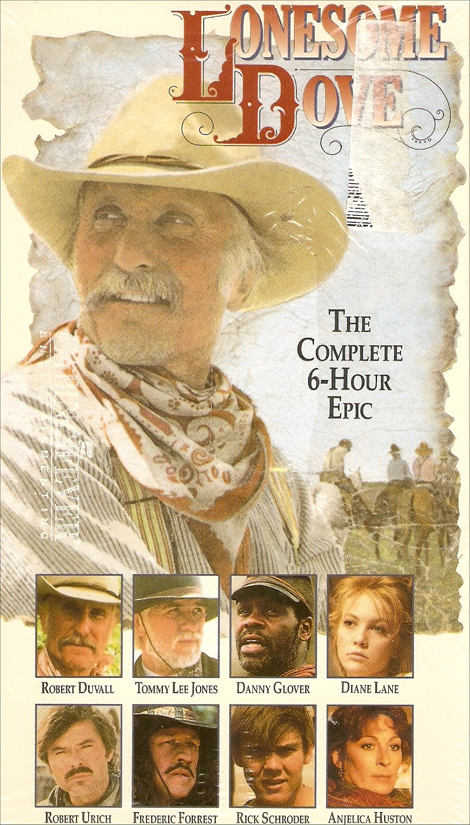 miniseries back in 1989. Not until I just happened to catch the last few scenes of the last installment, "Return", on that last night (they would usually spread these miniseries over a two week period) that I knew I had missed a terribly important piece of cinematic art, and on TV at that - the near lowest of all art forms in those days.

In the last scene in that last night, with the sun light golden and sinking over Lonesome Dove, Texas, a young reporter from San Antonio queried former Texas Ranger Captain Woodrow F. Call, played by Tommy Lee Jones, about his rather remarkable life's history, and then accused him of being known in those parts as a 'man of vision.'

As the young reporter queried Woodrow, and spat out all that he knew about the storied ranger, Captain Call paid him almost no attention, until that last statement of him being known as a visionary; to which Woodrow, with the last golden light of the day upon his craggy face, took a moment to reflect upon that vision. It was a vision, from Woodrow's eyes, shown to the audience in the haze of a streaming flashback, which he well knew, and shared great responsibility for, and in many instances the unintended consequences were quite dire for many of his long and valued friends. From those brief dramatic moments, with me brought in cold to the flow of the drama, I could sense all of this; as if it was some special connection directly to me from the rough hewn Captain Call character, straight out of the rugged Texas wilderness of 1876 and beyond.

And then out of nowhere, the first words uttered by the somber, reflective Captain Call, as the emotionally jarring flashbacks fade, "A man of vision you say? ... Yeah ... Helluva vision." And then the Captain with the weight of his visionary deeds heavy upon his shoulders and etched upon his face, his words played-out, unceremoniously walks off across the bridge fording Hat Creek, separating the ramshackle Lonesome Dove from what remained of his ramshackle of a livery emporium that he once shared with the greatest friend he had ever known - Augustus McRae. And then 'fade to black';Lonesome Dove is finished ... for now. 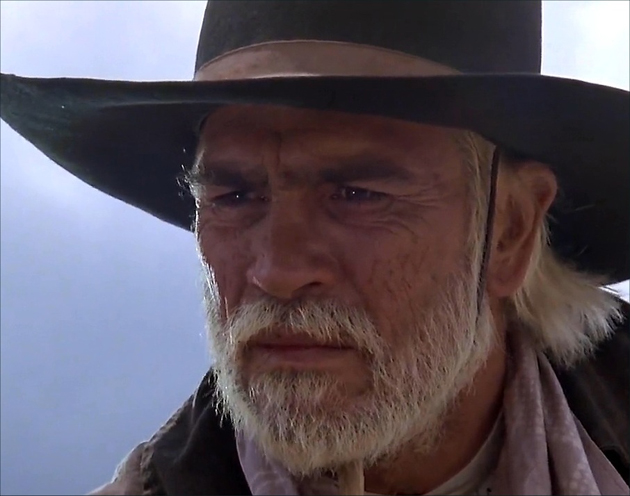 I immediately thought to myself: What did I miss? What could I have been doing that was more important than watching every minute of every episode of this fine drama, with this riveting conclusion? When will I get the opportunity to sit for these 4 nights again, with all the network commercials, and know that I had just spent my time wisely and well. 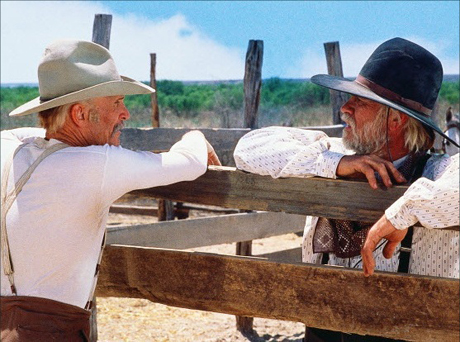 Gus (left), and Woodrow (right) each doing what they each do best: for Woodrow - remaining full-on serious while breaking the Hell Bitch and dreaming of a Montana ranch; for Gus - watching Woodrow work, and when given the opportunity - talking and laughing, mostly at Woodrow.
A few months later during the Summer rerun period, I had that opportunity to sit through near every moment of "Lonesome Dove" redux, and it was all that I knew it could be as a drama, maybe more. Since my 1989 brush with the classic Western: I watched it again in syndication, rented it from Blockbuster, more than once, bought the film when if came out on DVD, and just recently, I streamed it on two consecutive nights on Netflix. It had been a few years since I had seen Lonesome Dove in its entirety, and nothing had changed: well more than 6 full hours of a Larry McMurty story, well told with pitch perfect dialogue, perfectly acted, and my time well spent, but on this occasion, without the network commercials.

Early in the story in front of the ranch house, we bear witness to the re-acquaintance of Jake Spoon (back turned), the late Robert Urich, with the Cowboys of Lonesome Dove (from Left to right): Pea Eye Parker, the late Timothy Scott; Woodrow F. Call, Tommy Lee Jones; Dish Boggett, D.B. Sweeney; Augustus McRae, Robert Duvall; Josh Deets, Danny Glover; Newt Dobbs, Ricky Schroder.
The film begins at Lonesome Dove, with Agustus McRae, Robert Duvall, shewing and kicking a couple of yard pigs eating a snake from his rough hewn porch, and takes up the rocking chair, while sucking on a jug of corn mash. Gus looks over his dilapidated ranch, sees Captain Call struggling with taming the dappled grey mustang filly, known as the Hell Bitch, and smiles broadly the contentment of a satisfied man.

With the film just begun in the first installment known as "Leaving", we meet almost all of the cast of characters, in person or from their dialogue, and we also get a strong dose of foreshadowing of events yet to unfold. And the events to unfold would be plentiful, and at times dramatically gut wrenching. My wife, who does not particularly like Westerns sat in for part of the marathon binge watching session, and I heard her boohooing more than once.

But what ties one to these characters to care about them so. I mean, this was essentially television drama, and the 1980's does not make the 'golden age of television' on any knowledgeable person's list, so why did my wife become so emotionally invested, and to be honest as well myself, in these characters? Two reasons: outstanding story and incredible dialogue (perfect as a Western, and often hilarious in context), and spot on acting (some of the best I have ever seen). Oh and one more thing, secondarily speaking: Basil Poledouris's scoring of the film may be spare, but is melodically huge in accentuating the poignant elements of the story, smoothing over any slight dramatic rough edges, making this film true art. 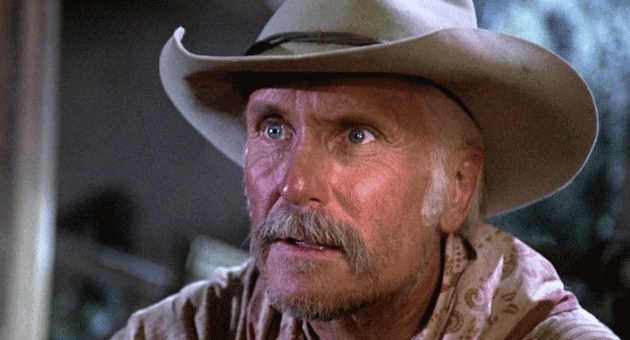 Good-natured Gus could be drawn into a scrap if need be, with his 45 caliber Walker Colt a great equalizer should he be called to draw-down on a dangerous character(s): Above.

Remarkably, Lonesome Dove began as a script for a 1970's era Western to be directed by Peter Bagdonvich; starring John Wayne as Woodrow Call, Jimmy Stewart as Augustus McRae, Henry Fonda as Jake Smoot, but on the advice of John Ford, a director with more great Westerns produced than any director ever, his great friend, John Wayne, turned it down, and the movie never happened. Subsequently, Larry McMurtry, developed Lonesome Dove into a novel of moving a huge herd of cattle and horses from Texas to the Montana Territory, published in 1985, which won a Pulitzer, and then made into the miniseries in 1989. Remarkably, the miniseries was the better alternative. 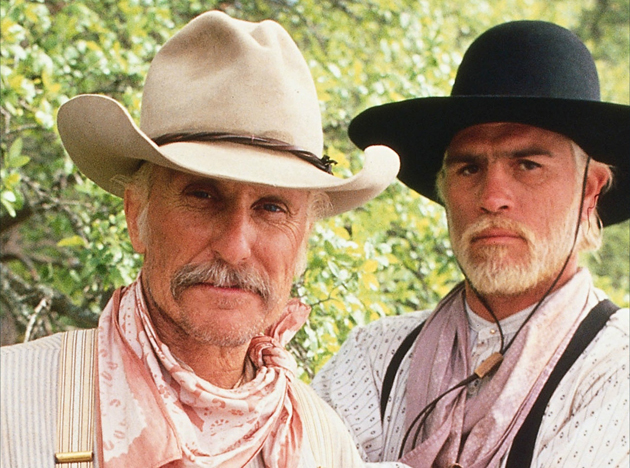 Captain Gus McRae (left), played by the venerable Robert Duvall, and Captain Call (right), Tommy Lee Jones: Above. Their cinematic relationship, as manifested through many scenes and even when they are not opposite one another, is one of the most powerful ever filmed, irrespective of genre or medium.     Click image to expand. 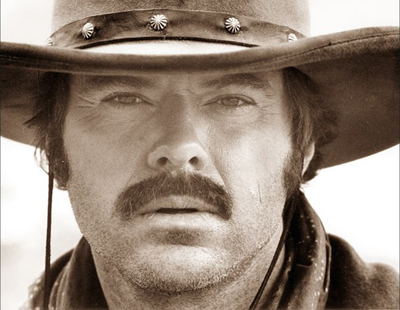 The former Texas Ranger Jake Spoon character, played by former television icon, the late Robert Urich, can well be described by someone who knew him best, Gus McRae, "Jake always was too leaky a vessel to put much hope into."
Comparatively speaking, as fine of a Western actor as John Wayne was, and as outstanding of an actor as Jimmy Stewart was, in all genres, they would have been miscast, whether it be a big budget Western, or a well produced miniseries. For this one tale told in celluloid, Tommy Lee Jones would have acted circles around John Wayne, especially with 'The Duke' in his seventies, and Robert Duvall incomparable in some roles - Augustus McRae was one of those roles.

Upon further consideration toward the right people playing the right roles: A combination of that fine script, and the chemistry of these actors cast for this epic Western proved to make each actor's performance more masterful, even to the point that every actor that was fortunate enough to be part of Lonesome Dove, expertly directed by Simon Wincer, either enjoyed the best role of their careers, or one of their very top roles - even accomplished thespians Tommy Lee Jones and Robert Duvall - both Oscar Winners as well as countless other awards and nominations under their respective belts.