What Veterans Day Means to Me | Beaufort County Now

I am not a veteran. I only have the greatest respect for those who have served, unsurpassed by all professions that keep America safe and strong. veterans, America safe, Global War on Terror, Rules of Engagement, Pacific Theater, World War II, United States Coast Guard, Army, Navy
Home
Categories
Login

What Veterans Day Means to Me

Login to Send a Private Message to Stan Deatherage
Find a veteran to thank, which should be the prime objective for everyone that appreciates the true patriots among us

I am not a veteran. I only have the greatest respect for those who have served, unsurpassed by all professions that keep America safe and strong. To that extent, I observe Veterans Day.

Not all veterans served in foreign wars, but, in these times of the Global War on Terror, many have. Many are physically and mentally devastated from that war of shifting Rules of Engagement. It is a war that the politicians were ill prepared to prosecute, still aren't; however, we can always expect that perfection in military application in our citizen government, with our citizen military is a fleeting, often unattainable ideal. While America has the greatest, most professional military that the world has ever known, rarely do we get it right ... World War II was the exception in modern times.

That is the way a democratic republic works: We are run by citizens, our immediate contemporaries, who are voted into office; and we are protected by citizen soldiers, most of whom will not make the military their career. In fact, by today's standards of military personnel versus the citizenry, only around 2% of our nation's population protects the rest of us - the 98%. It has not always been that way, especially in World War II, and we will talk about that later.

While I mentioned that I am not a Veteran, as most Americans are not, I am the son of a veteran, Robert Earle Deatherage, and the father of one, William Stanhope Deatherage, Jr. I am so very proud of my father's patriotic call to duty, and I take great pride in my son's desire to serve these United States as well. Neither were drafted, but both found their manhood in the service of our nation, were honorably discharged, and both were, and are good men, who loved, and love their country as well as their families. What better Americans to walk the good earth of our nation than the veterans that serve us all, many of whom were put in harm's way - then and now?

My son, who served in the United States Coast Guard and reached the rank of petty officer, second class, never was put in harm's way, other than his job to climb the floating buoy towers in the Atlantic and our eastern waterways to maintain the safety of our shipping lanes. My father, who served in the United States Army in the Pacific Theater of World War II, reached the rank of staff sergeant, and definitely was put in harm's way, as he fought in two of the largest battles of the Pacific Theater, then prepared for the Invasion of Japan. 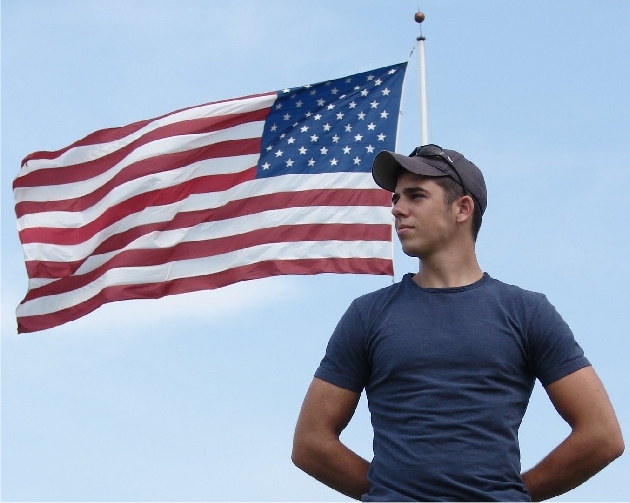 Stanhope Deatherage, Jr. at Fort Pulaski, adjacent to Tybee Station on Tybee Island, Georgia, at the mouth of the Savannah River: Above. We visited Stanhope quite often while he was stationed so far away from his North Carolina home.    photo by Stan Deatherage

My father, in contrast to my son, was swept up into the patriotic zeal to serve after Japan's unprovoked attack on Pearl Harbor, where America's Pacific Fleet was stationed, and summarily devastated. Bob Deatherage was only 15 years old when Pearl Harbor was attacked on December 7, 1941, and then hours later the Philippines and Wake Island were also attacked by the Japanese, drawing America 'kicking and screaming' into total war, the likes of which this nation, and this world has never seen before, or since.

The war effort in the United States was total, with 16,112,566 American men serving in the military, with others back home, especially the U.S. women, serving in retrofitted factories as line workers building some of the most efficient lethal weapons to be employed by either side. The United States census in 1940 was 132,164,569 souls, so the ratio of citizens versus soldiers was 12.19% veterans serving us, protecting us, which is over 6 times higher than the citizen participation in the war effort here currently during the World Wide War on Terror.

When my father was just 17, as a Freshman at North Carolina State, in 1943, he set his sights to join the Navy to become a Navy Pilot. Robert Earle had scored extremely high on his entrance exams for flight school, the Navy badly needed pilots, but there was just one problem, young Bob was only 17, and he needed his mother, Ida Mae, to sign him into the Navy as a minor. Ida Mae would have none of the signing of her only 17 year old son into a profession to fly off a perfectly fine air craft carrier in a propeller driven gunship that every facet of a vigorous and well armed enemy would be shooting at.

A year later, when Bob turned 18 in late August, he left after his freshman year at NC State, and signed up to fight for his nation, but there was another problem with him now becoming a Navy pilot. They did not need any now, they needed infantry, preferably smart ones like my father, so he joined, trained, and when it was time to retake the Philippines ("I shall return" - General Douglas MacArthur, 1942), my father was tromping right along with the brilliant general; however, in a far more forward position.

When that huge battle was finally coming to its inevitable conclusion, Bob Deatherage prepared for the first battle of this war on Japanese soil - Okinawa - this time as a squad leader, as a buck sergeant, at 18 years old. I still find this a remarkable feat for someone so young. After the Okinawa victory, when it was time for the eventual Invasion of Japan, my father was promoted to staff sergeant with his own platoon command, and again, remarkably, he was not yet 19 years old. 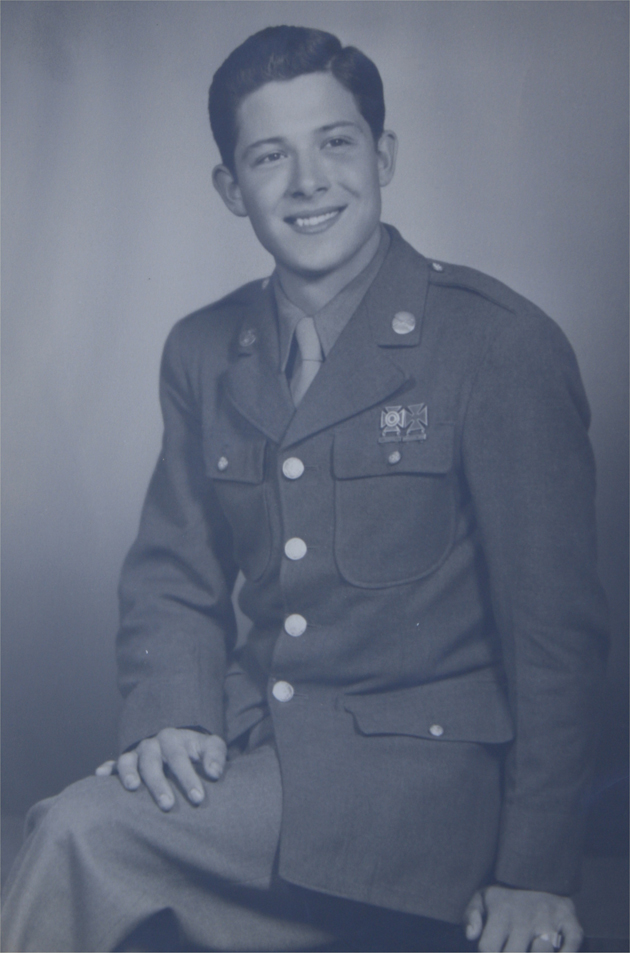 Robert Earle Deatherage, barely 18 years old in 1944, before he earned all his stripes as the citizen soldier from Fuquay Springs: Above.

Think about what you were doing when you were not quite 19 years old. Chances are, you were: not the youngest platoon leader in your battalion, and barely old enough to drink beer (18 in those days), in the largest war the history of Man has ever known, preparing to lead his platoon into the largest battle this nation would ever know (probably larger than the Battle of the Bulge) - the Invasion of Japan.

Just a few weeks before Robert Earle's 19th birthday, just a scant few hundreds of miles from my father's position in Okinawa, the Enola Gay dropped the first atomic device (the first of two ever used in war) on Hiroshima, Japan. Three days later, a second B-29 dropped the second atomic device on Nagasaki, Japan, effectively ending the greatest war in the history of Mankind. My father, at 19 years old, commanded his platoon in the Occupation of Japan, following the implicit commands of Japan's new Emperor - General Douglas MacArthur.

The General's orders were absolute, his power immutable by America's standards as a Democratic Republic, and when my father was directed to command the destruction of giant piles of Japanese small arms in great bulk, he executed his orders with extreme prejudice. Remarkably still, my father bequeathed to me, at his passing, a 7 millimeter Japanese sniper's rifle and a samurai sword. I keep these archaic instruments of combat as monuments to Bob Deatherage's patriotic youth in a war where the only option was to win at all cost.

Thank God the America of the 1940's did have the immense fortitude to win, and, moreover, thank God that they did destroy the abject evil born from our adversaries' ambitions, for that legacy of unconditional victory has preserved a great peace, as it did, also, catapult America to the position of the preeminent democratic republic of our modern world.

Veterans of our military, whether or not they have fought in foreign wars, all pay a price to give of themselves to this great level of commitment. During his years of service, my son lost the majority of his ability to hear, which is quite a sacrifice for his country since he is a fine amateur musician. Because of his sacrifice in World War II, my father lost his innocence in large chunks, forever scarring his spirit.

Robert Earle Deatherage was raised a Southern Baptist Christian, from Fuquay Springs (Wake County), North Carolina, to love God, his Mamma, and his country. His love for the preservation of his country, like so many fellow men of his generation, cut deeply into his spirit. There is no way for those of us that have never fought and killed our fellow man for the betterment of an objective, or, moreover, to preserve one's own survival, to ever fathom such.

When I was very young, I used to ask my father: Did you kill anybody in the war? His answer was always "I don't think so", and on other issues, he just would not talk much about the war until he got much older. As I got older and learned about the history of World War II, I realized that my father was not being completely honest with me. I just suppose it was something that he could not, or wanted not to discuss with his young son, and as I grew older, I respected that.

In the Battle of the Philippines, the largest battle in the Pacific Theater, The casualties were huge for the Japanese: over 336,000 Nippon troops killed by Americans, and what few allies that participated in that battle, with America and those allies losing less than 14,000 troops.