Published: Sunday, November 25th, 2012 @ 10:48 am
By: Marvin Sparks   ( More Entries )
Publisher's note: Marvin Sparks always contributes posts, to Beaufort County NOW, that are of great interest to me because he sees today's events through the clear eyes of an older generation, who possessed the abject clarion understanding of what it meant to be a true American. My father taught me this dedication to that unfaltering truth, and I have endeavored to pass this on to my own children as well.

With my fathers' passing too long ago, I am thankful for men such as Marvin, who wish to impart these immutable ideals to the hearts of those who can understand these precepts as truth, and thereby live accordingly.

In Marvin's note to me: "Stan, I have been in a state of denial since the election, I just can't stop and moan about it forever. It is over and nothing can be done about it.", attached to his missive, one might understand this statement as a wee cry of quiet desperation that could lead one to founder in the abdication of the continued effort to guide future generations toward the light of an American truth. I, however, knowing Marvin through his work, have detected his steeled resolve to continue the cause to the possible unrequited end, no matter what occurs.

I suggest that all true patriots enthusiastically do the same.

On December 7, 1941, Pearl Harbor was attacked by the Japanese, and over 2,400 Americans were killed. As a result, a patriotic fever engulfed the entire country. Long lines formed outside recruiting offices to sign up for military service. Newspapers and radio stations did everything they could to support the USA. Hollywood stars signed up for military service, war bond drives, and troop entertainment. The whole country was at war, and we encouraged and supported every aspect the war effort. I was seven years old when the war started, and even at that age we were determined to do our part. We saved our allowance to buy War Bonds and stamps, and we supported our military heroes any way we could. My father was my greatest hero while serving in the Pacific. Now I am saddened and bewildered to what has happened to the country that I love. We are under attack by an enemy who is even more vicious than the Japanese or the Germans, and they are determined to kill us and destroy our wonderful country. 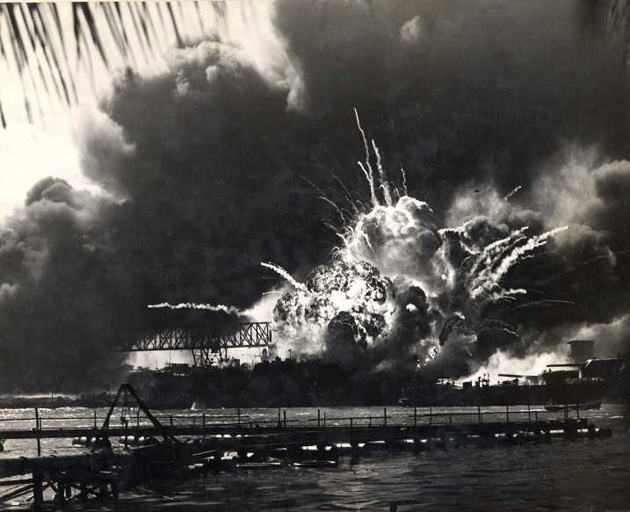 The unprovoked, malicious Japanese sneak attack on Pearl Harbor, December 7, 1941, begins in the harbor of Pearl: Above and below. 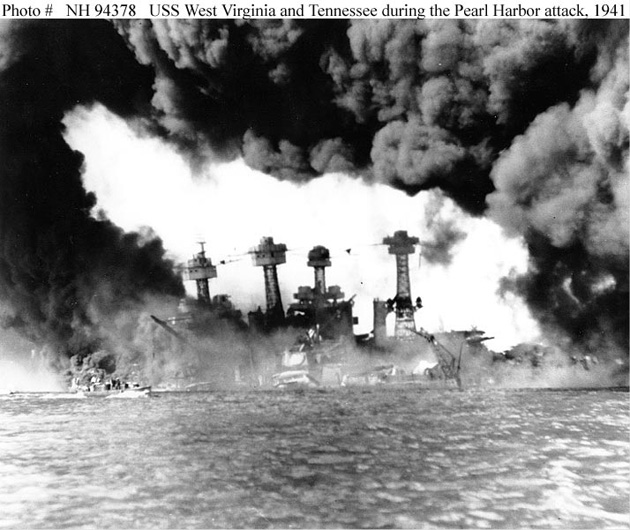 Hollywood has become more radical and anti-American than most foreign countries. They make movies glorifying our enemies and undermining the values that have made the USA the greatest country in the history of the world. Our major news outlets support the radical agendas of the United Nations and liberal groups within the United States. Their bias against the values that has made this country great is so blatant that they no longer try to disguise it. The major TV programs rant against the military that have served and died to give them the freedom to voice their opinions, no matter how obnoxious they are. And with all the self loathing against the United States they fail to realize that we are again at war. And we will lose this war unless we start fighting back. As yet, we are not allowed to call the enemy by their proper name. The enemy is Muslim terrorism, which is a group that has no defined country, but has military bases in many countries, and they are united by a religion that is also their political belief.

The President of the United States, Barrack Obama, is a megalomaniac who has an unrealistic belief in his superiority, grandiose abilities, and omnipotence. He is characterized by a need for total power and control over others and is marked by his lack of empathy of anything that is not in his self interest. Therefore, if he says that al Qaeda is no longer a threat then to him it isn't. If he refuses to use the word terrorist then it doesn't exist. That is why a rational person looks at this administration in bewilderment. And the question that is often asked about protection from Radical Islam goes unanswered. They have no answer, because to them it doesn't exist. Therefore, we have become easy targets for terrorists, and in some cases willing accomplices to our own destruction. "WAR IS DECEPTION," is an often quoted saying by the Prophet.

There have been 3,094 Americans killed by terrorists in the United States in 66 terrorist attacks since 1972-2011. In spite of the Muslim outcry of discrimination there has only been one Muslim killed in the US. By executive order President Obama has ordered the removal of the term terrorist, Radial Jihad or Muslim from the language of all government documents including the Library of Congress. Even the military in the name of diversity that is fighting terrorists can no longer use the term. The soldier who was killed at the Little Rock recruiting station was reported to be the victim of a drive by shooting when it was clearly a terrorist attack. The most outrageous cover up was the terrorist attack at Ft. Hood, Texas when a soldier killed 13 of his army buddies. While it was clearly a terrorist attack, the military was only allowed it to be called workplace violence. The term workplace violence was not only a repugnant distortion of the truth is has penalized the victims by denying them service medals, the pay, and hospitalization that they deserve. They are victims of the terrorist and our own cowardly military.

The United States refuses to close our borders, so terrorists are allowed to cross the borders un opposed, so they can set up sleeper cells awaiting orders to attack. We allow vast numbers of Muslims to come into the country on visas who overstay with no desire to return to their home land. We allow un monitored Mosques and Muslim schools to operate while knowing full well that they are recruiting and training Jihadists in the schools. They are certainly not promoting values of the United States. We know this because of FBI tapes that have been secured from the Mosques. The population of the Muslims in the USA is growing faster than any other minority group. We have seen the population explosions of Muslims in France and in other European countries to the point that they will have control of the countries in a few short years. And that is the fate that will be staring at us in a few short years. They will simply out produce the population of the USA until they control everything with their votes.

President Obama and Janet Napolitano have appointed at least two devout Muslim to the Department of Homeland Security. Arif Alikhan is Asst. Secretary for Policy Control, and Kareem Shora is Executive Director of the Homeland Security Advisory Council. Both the FBI and Homeland Security have had to have sensitivity training so they can deal with Muslims without offending them in any way. This in effect ties the hands of the security forces who are dedicated to defending our country.

The Department of Defense has issued dire warnings about the danger of Cyber Attacks against the infrastructure in the USA. There are literally thousands of attempts to invade out security systems daily from Iran, China, and any other country to who would like to harm us. Some of our major financial institutions have been hacked recently. Transactions have been disturbed and information stolen. And as bad as this has been it could get worse. It is possible that trains could be set to crash, electric grids could be shut down, water supplies could be poisoned and whole cities wiped out. Anything that you can think of that is controlled with computer could be at risk. A friend of mine is with the Audit Department of NC is monitoring all the safe guards in place to harden the defenses for critical components. This isn't fiction. This is real and the government is worried about it, as we all should.

We all know what a bad year 2012 was for forest fires, but did you know that many of them were arson that was started by terrorists. An al Qaeda web page has detailed plans for making and using fire bombs to start forest fire. Just think of the damage that one fire bomb can do to the trees, the cities and the homes that part of the forest. It takes years after a fire for the area to recover. Al Qaeda has been using forest fires and Russia and Europe with great success.

We need to wake up before it is too late.
Go Back