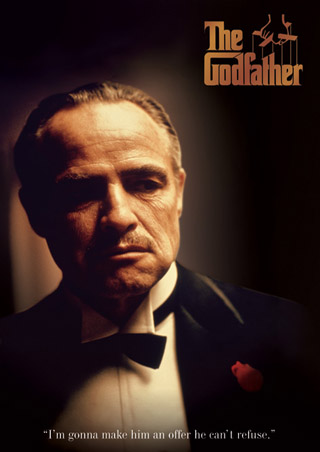 and that year they got it right. This great film, directed in the perfect tones of an extraordinary classic by Francis Ford Coppola, was the initial chapter in the trilogy of the Corleone family and the godfathers: first, Don Vito, and, secondly, his son Michael. The film explained little as to the history of how the Don came to his place of power at the head of the Corleone Crime Syndicate; moreover, it revealed the extent to which he was willing to maintain it.

Don Vito, portrayed by the enigmatic Marlon Brando, who deservedly won the Oscar for a Male in a Leading Role (although he rejected the award), was a community oriented criminal who exhibited great wisdom within his compartmentalized context of being a good family man - to his wife, his offspring, his community. Novelist Puzo and Director Coppola both wrote the screenplay, which fleshed out a complex life for the Don that extolled the virtues of family and community over the benefits of profits. Sadly, this became Don Vito’s downfall.

The Godfather politely refused to move into the illegal drug trade, which would have expanded this product into neighborhoods such as his. He had a moral objection to narcotics, and declined to allocate his family’s structural support to narcotics purveyor Virgil “The Turk” Sollozzo, played by perpetual heavy Al Lettieri. Subsequently, he was gunned down by Sollozzo’s men as he shopped with produce vendors in the streets of Little Italy in Manhattan. Lingering near death, his youngest son, Michael, played by virtual newcomer Al Pacino (who was paid a mere $35,000 for the role), visits the Don in the hospital, only to find all of the guards curiously absent.

When Michael quickly recognizes the obvious, he moves quickly to secure his father’s safety, exhibiting the leadership skills he learned from his father and as a decorated officer 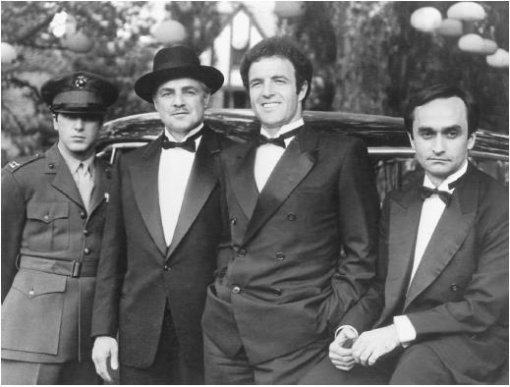 in the U.S. Marine Corps. Once Don Vito is in a quasi-secure location, Michael moves down the stairs to the gates of the hospital where he confronts the men who would finish the murder of his father. In front of the gate along the sidewalk, Michael has a verbal exchange with a police captain, Mark McCluskey, played by Sterling Hayden, who works for the Sollozzo Family as a “dirty cop.”

Captain McCluskey slugs the restrained Michael and breaks his jaw. The reason I mention this scene: It is Michael's pivot into the family business. Don Vito had gone to great lengths to keep Michael out of the business for Michael‘s well-being. It was possibly his desire for Michael to be the transformational force that would provide the untainted leadership to take the Corleone Family into a more legitimate direction. Michael knew in his heart if his father was to live, if his family were to survive, he would need to become involved.

The opposition's next move: arrange a meeting with Michael, at an undisclosed public place, to initiate a truce. The Corleone Family's next move: have the requested Michael meet with the opposition, Sollozzo and the "dirty cop," discover through informants the undisclosed location, plant a "clean piece" in the toilet, have Michael gain their confidence, and then ask to go the toilet.

"Walk out of the toilet, put two in the head, let the gun drop from your hand and walk out fast," was the advice of Clemenza, Don Vito's most loyal and trusted associated, and Michael Corleone did not disappoint. 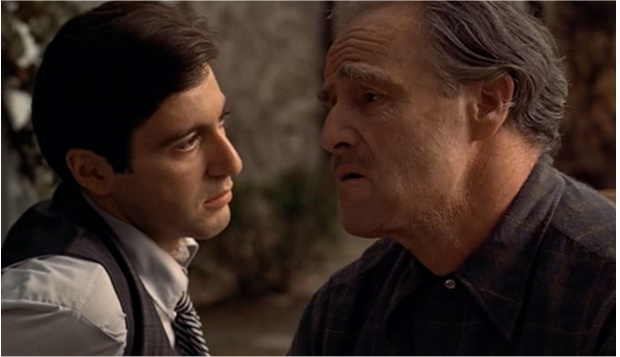 The Don is out of the hospital, and speaking with the one son that is still alive and can be trusted - Michael.

Michael is successful in his murderous endeavor, and, subsequently, he spends a few years in Sicily as a guest of family friend Don Tommasino to escape any investigation or prosecution. When he returns, his volatile brother, Sonny, portrayed by James Caan, is murdered by a rival family as the mob wars ensue as a direct result of the Corleone Family's defense of their right to exist. Upon his return, Michael is held in high regard by all of his father's associates as the likely successor to his father as the family's don.

Whether the base story, as represented in this short version, is a compelling attraction to this truly great film is 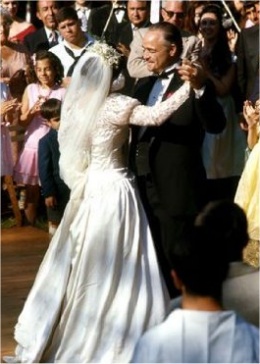 unimportant. What is significant to compel one to familiarize themselves with one of the world's greatest films is Francis Ford Coppola's extreme attention to cinematic details; the use of the dramatic tones of color as a backdrop to essential, nearly perfect dialogue to express a story that is timeless as a journal of the 1940's, 1950's mob in America; and the influence of one man, Don Vito, in his tenuous grasp, to hold his family together against the ravages of a dangerous societal environment.

If you are interested in good films, and if you are not familiar with "The Godfather Trilogy," you should begin with the first installment that started it all - "The Godfather." One cannot truly appreciate its sequel “The Godfather, Part II," if one has not laid the groundwork with this great film. In order to understand the thematic significance of this classic trilogy, you must witness one of the greatest opening scenes in cinematic history - the wedding party.

In this scene, Connie, Don Vito's only daughter, played perfectly by Talia Shire, Coppola's actual sister, enjoys her large, raucous wedding party while the Godfather greets his many guests in his den/office, wishing to discuss business, favors and congratulations with the most important man in the neighborhood. Watching Luca Brasi, played by former wrestler Lenny Montana, rehearse his speech to an invisible Don is worth the price of a rental. 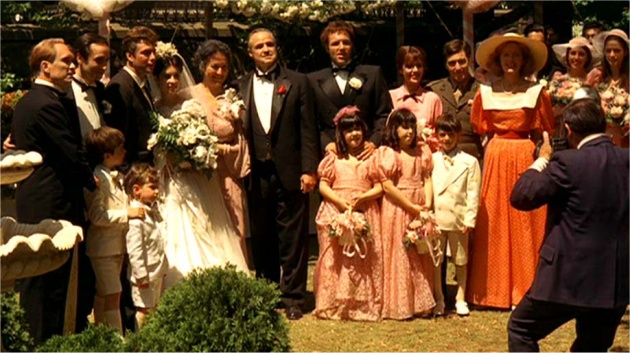 The obligatory family group shot at Connie's wedding: Above.

Luca Brasi: "Don Corleone, I am honored and grateful that you have invited me to your daughter... 's wedding... on the day of your daughter's wedding. And I hope their first child be a masculine child. I pledge my ever-ending loyalty."

These smaller actors, under the astute direction of Coppola, are pitch perfect. "The Godfather" is well regarded as the film that launched the respectable careers of two of that generation’s most important actors. The careers of Al Pacino, who nailed the role of Michael Corleone, and Robert Duvall, as Family Consigliore Tom Hagen, were catapulted to the point where they became two of the ten highest regarded actors of the 20th century. Tom Hagen was the adopted son of Don Vito and was as much a son to the Don as was his biological son Fredo, played by John Cazale. 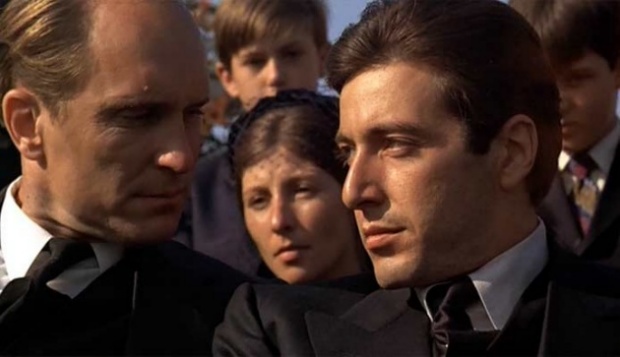 In this film and in "The Godfather: Part II," Michael, Al Pacino, receives the counsel of Family Consigliore Tom Hagen, played by another relatively unknown actor, Robert Duvall.

"The Godfather" is a perfect film and one of the great classics of the 20th century. To miss it because it is too long (175 minutes of runtime), or too violent (body count: 16, including a thoroughbred) would be a sad commentary for anyone. I beg you to see this picture for the first time or once again, and please comment below if you are so led. In time, I will review "The Godfather, Part II" and "The Godfather, Part III." Until then, enjoy the classics.


Come join us at our new Movie Database. We welcome you our latest feature to sort through film data to discover information on actors, directors, film images, or just what is playing, when it will pay, or when it did play. It is a work in progress, so we would appreciate your input.
Go Back