From the Bottom Rung, One Often Sees the Risers to the Top.

And then again, we may never know all there is to know about Felix Bush. Felix was a hermit who stayed to himself and 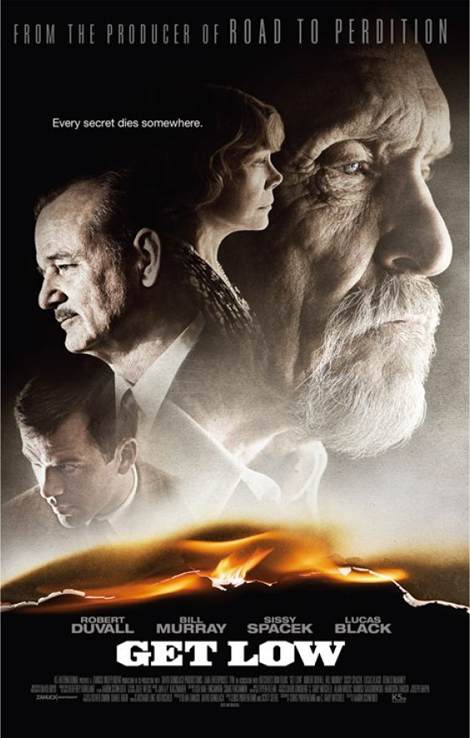 kept locked up inside to the point that no one knew the truth, the history of who he was, and how he got that way. Felix figured it was about time to awaken his dark past to enlighten those folks who had long considered the many rumors that filled that blackened void.

Venerable Actor Robert Duvall is drawn to these roles: Dark conflicted men, who are at the nexus of their existence. He finds value in films that share real truths that are universal, irrespective of the budget of the film in question. Usually, however, these are of the low-budget variety that depend on a believable story, with strong character development. These films are often littered with good and great actors who lend out their craft "on the cheap" just to be part of what might be a truly great piece of film making. "Get Low" was one such low-budget film that communicated its superior message in its supreme triumph of substance over style.

Robert Duvall's Felix Bush was the allegorical depth that Man can sink to without the spiritual revival of living a purposeful existence. It was not that he was incapable of a spiritual revival of his mortal soul, he just consciously and purposefully denied himself of such for nearly 40 years as penance for a singular past deed that haunted him, and shaped who he had singularly become - a man without spiritual dimension, a man of many regrets. Felix was a man who needed to have begged for redemption in the light of truth, but was incapable of asking for such. Eventually, it almost became too late. 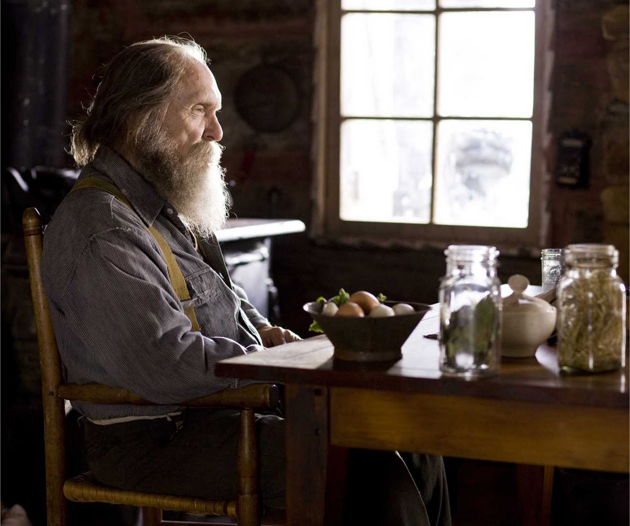 Felix Bush, Robert Duvall, gets his makeover from besmirched hermit to a man waiting for his own funeral before his ultimate demise: Above and below. 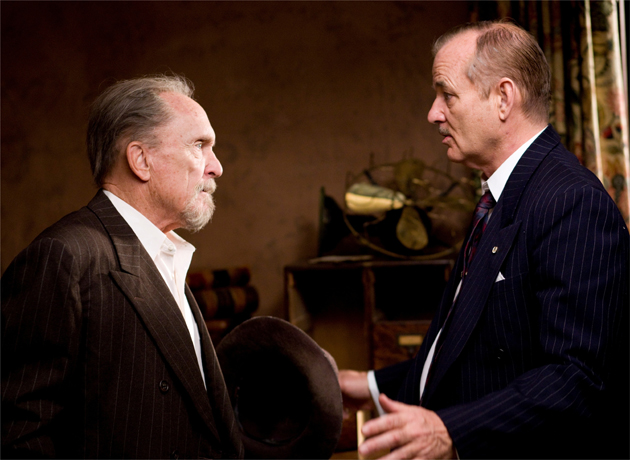 In a story of many messages, however, the one message that drove the story's plotline for me: The abject baring of a man's soul, stripped away in thin veils, as he drove himself against his very nature - the complete privacy of spirit - until he came clean before God and his community of similarly imperfect beings. And this community, full of frailty of spirit, was chock full of interesting characters against the backdrop of the geographical foothills of southern Appalachia during the 1920s.

By far the most interesting was the role of Funeral Director Frank Quinn, played by versatile comedy-icon-turned-most-believable-actor Bill Murray. Frank Quinn had his own set of problems with a whole banquet full of character questions strewn through his past days as a Chicago businessman, possible huckster - driven far down south to the Mississippi watershed of eastern Tennessee. Here Frank lives in about as much anonymity as any lone, town funeral director can be afforded, and still life is difficult. 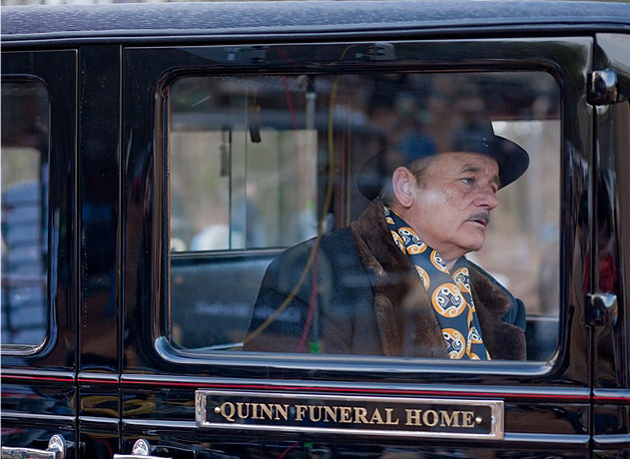 Beleaguered Funeral Director Frank Quinn is colorfully played by Bill Murray: Above and below. 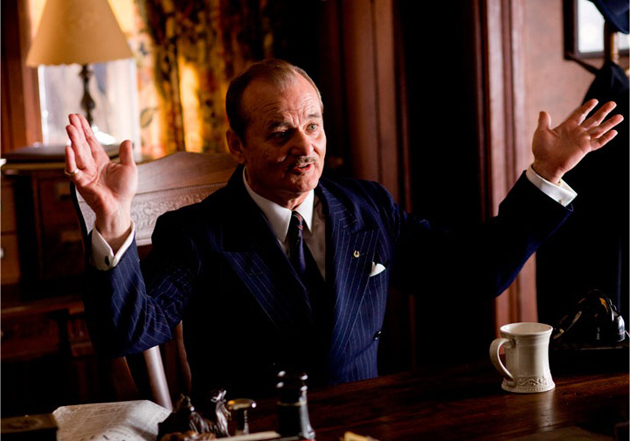 Frank Quinn's largest problem was financial: Nobody in the community is dying, and this fact, and whatever other dark secrets yet dwell deep within his character, is driving him to drink, and to question his own ongoing judgments. This is quite interesting since Bill Murray fleshes out such a believable character, who is earnestly sympathetic, which allows the audience to form a bond with him, and instills within us some hope that he remain a decent man, irrespective of the challenges that lie before him. And now with the former hermit, Felix Bush, and his fake funeral in his administrative care, his troubles have multiplied.

Every big man, irrespective of his dark past, has an associate, and Frank Quinn's young assistant is a fairly virtuous family man, Buddy, played by Lucas Black. For those of you who do not know this young actor, Lucas really got noticed when, at the tender age of 12 years, he played Frank Wheatly in the cult classic "Sling Blade." One of the few child actors that has successfully transitioned into a successful adult acting career, Alabama born Lucas Black was perfectly cast as Buddy. 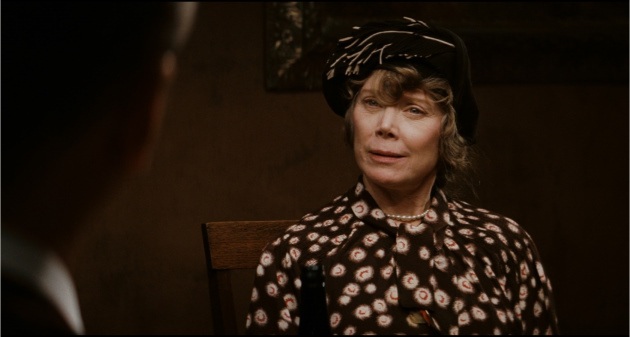 Sissy Spacek, as Mattie Darrow, sees two sides of Felix Bush, and one wonders: Which one will win out? Maybe neither: Above.

Buddy's mother-in-law, Mattie Darrow, played by esteemed actor Sissy Spacek, returned to her childhood home after her husband's death. Coincidentally, Mattie Darrow has a deep and irrevocable past with Felix. There appears that there were many bittersweet moments - mostly bitter. Before the end of this tale, one will fully understand why the bitter moments, why such sweet and simultaneously hard feelings are held fast by Mattie.

The unrelenting irony of "Get Low" is that deeply conflicted people, like Felix Bush, and all those who ironically orbit this mysterious man, all have an unabiding interest in this hermit, who now walks their streets shaven, shorn and dressed in a new suit of clothes. 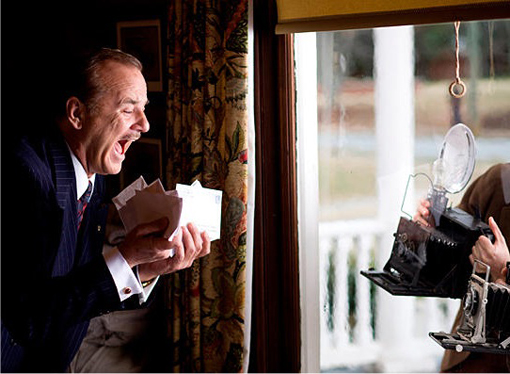 It is not that they actually care about his mortal soul, they are just plain curious about the man they have heard so much about.

That curiosity would be better spent in the real examination of their own lives; however, when Felix is resolved to have his funeral before his demise, with himself in full witness, most of Caleb County's citizens cannot resist the temptation. Unlike Mark Twain's Tom Sawyer, when Tom and Huck Finn just happened upon their own memorial service, Felix plans his last rites, with Frank Quinn and Buddy orchestrating the event.

Seeking complete promotional success, they concoct a plan to lure folks within the county, and the adjoining countryside to 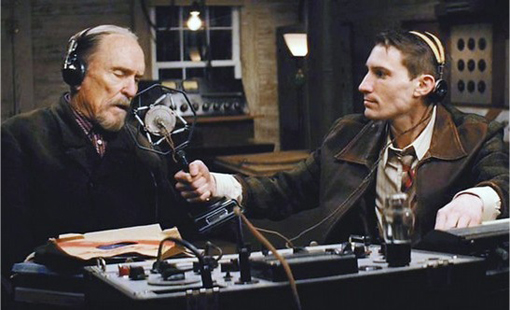 buy a raffle ticket for $5.00, earning them the opportunity to win Felix Bush's hillside cabin, along with his 300 acres of virgin timber. Besides their morbid curiosity, this stunt insured that multitudes would come to do Felix's bidding: To regale each other with stories of the Hermit Bush - real or rumored.

Although this may seem like one big joke, and there are some uncomfortably funny moments in this fine film, the crux of this story is no laughing matter. At Felix's mock funeral, this reality was best put in words by an old friend that Felix had subsequently, like everyone else in his life, lost touch with. 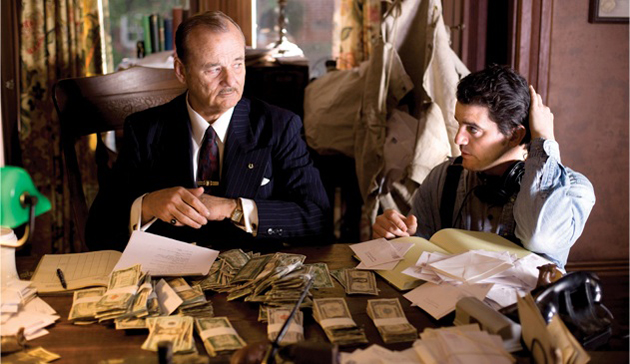 Frank Quinn, Bill Murray, (left) and Buddy, Lucas Black (right) count the raffle money that they are charged to watch over until Felix's funeral: Above.

His friend, Reverend Charlie Jackson, played by character actor Bill Cobbs, remarked before the vast throng that came to Felix's funeral - mostly out of curiosity and the raffle: "We like to imagine the good and bad, right and wrong are miles apart. But the truth is, very often they are all tangled up with each other." 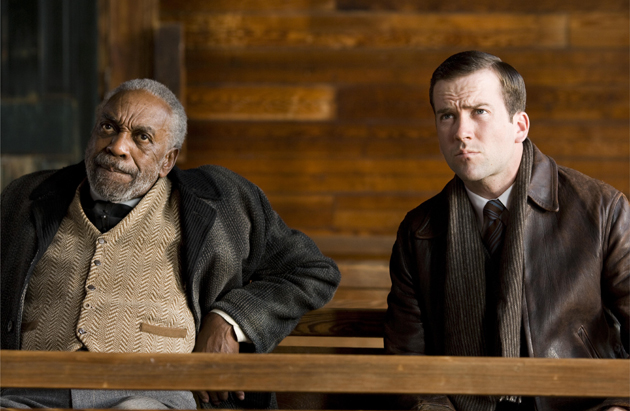 The Reverend Charlie Jackson, played by Bill Hobbs, (left) and Buddy, Lucas Black, sit in the good reverend's church that Felix Bush built, as most probably more unpronounced penance for his one unmentionable past deed. The consternation in the reverend's face bemoans: Will he speak at Felix's fake funeral? Above.

As you may have surmised by now, that is exactly what I took away from this film in terms of its message. I also had a most enjoyable time seeing a finely crafted film by longtime 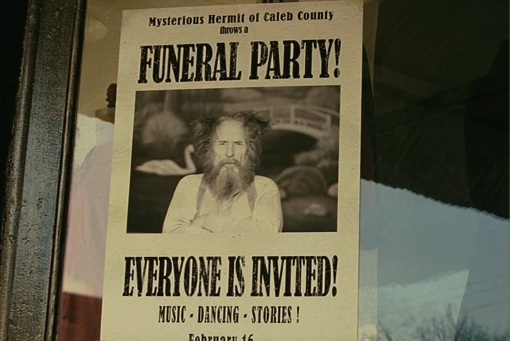 The developers of this fine film needed only 103 minutes to tell this remarkable story, and to their credit in keeping with the period of the story's setting, they used an outstanding score of traditional music, some of it composed by two members from one of my all time favorite bands - Alison Krause and Union Station's Jerry Douglas (dobro player extraordinaire) and Alison Krause (songbird of sorts).

Loved the film, understood the message. Maybe you will too if you give it a chance. Keep an open mind, and look deep within yourself: You may see what I understood.