Login to Send a Private Message to Stan Deatherage
Publisher's note: This endorsement from former NC State Representative / NC Senator Fern Shubert is a major development in a possible second primary runoff between Debra Goldman and Greg Doriity for the Republican nomination for North Carolina State Auditor. I say "possible second primary runoff" because, currently, there has been no announcement to that effect.

Should this second primary runoff materialize, NC State Auditor Candidate Dority will benefit greatly from the former NC NC Senator's endorsement. NC Senator Fern Shubert has impeccable Conservative credentials, and she giving her nod to Candidate Dority will tremendously enhance his possibilities to weather the runoff, and emerge the winner, thus carrying the banner for the Conservative movement statewide in North Carolina.

Greg Dority is my friend, he is truly the Conservative, whom I have known him to be, and I, too, have already endorsed Greg, therefore, I admit to a strong personal bias for his eventual victory in the second runoff primary, and to unseat the incumbent, Democrat Beth Wood, in the November General Election.

Now let us here from the Honorable Fern Shubert here below:

I am pleased to endorse Greg Dority for the Republican nomination for State Auditor in the July runoff. I have known Greg for many years and am absolutely convinced that he is far better qualified, by training and temperament, than his primary runoff opponent.

Greg ran his primary campaign with integrity. He did not mislead people about his qualifications. While he has audit experience, unlike his opponent, he focused on his leadership skills. Greg has a lengthy record of loyalty to the good-government principles most Republicans, indeed most citizens, embrace.

The people want to see state government held to a higher standard than has prevailed in the past. They want a State Auditor who, without fear, will help restore trust and confidence in Raleigh. Greg is that individual.

I thank my supporters for their strong support in the recent primary and humbly ask them to make a special effort to support Greg Dority in the runoff and General Election. 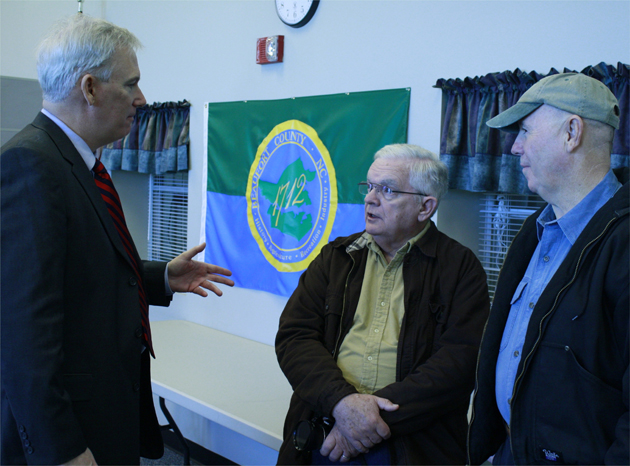 Greg Dority (left) discussing the regimen of the "good-government principles," embraced by his friend Fern Shubert, and so abundantly absent in the Council of State, in Raleigh, North Carolina.     photo by Stan Deatherage
Go Back