ECU's Delta Beta chapter of Pi Theta Epsilon, the national honor society for occupational therapy, is asking students to sign a pledge that they will refer to people with disabilities as a person first and not their condition.

"In working in the community, reading articles from popular media sources and seeing people converse on social media sites, we have read and heard instances of non-person first language being used to describe individuals," Armstrong said. "While the speakers did not intend to be derogatory, we hope to make people aware that using person first language is a more empowering and appropriate way to refer to individuals than to identify them by their diagnosis." 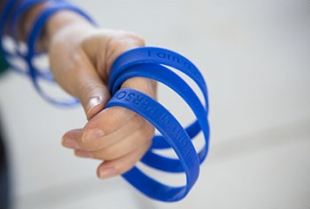 Bracelets distributed in the campaign raise awareness about person first language in health care.
Occupational therapy students will distribute flyers and pledge cards and will collect donations for the national Person First campaign at a kick-off event and bake sale from 10 a.m. until 2 p.m. Sept. 26 outside The Wedge in the College of Allied Health Sciences and at other events this year. Those who make a $2 donation will get a blue awareness bracelet.

"It is commonly found that people refer to individuals as their disability first which is impersonal and demoralizing to individuals with disabilities," Donica said. "Our organization is striving to increase awareness on the medical campus of the importance of person-first language to demonstrate respect for all people. That is the reasoning behind this pledge."

ECU occupational therapy graduate student Elisabeth Sitton shared a quote by Dr. Robert Marion, author of "Genetic Rounds: A Doctor's Encounters in the Field that Revolutionized Medicine," that illustrates the importance of the Person First campaign.

"When I speak with families of children with Down syndrome, I take great pains to use this terminology: they are children first, children who happen to have Down syndrome. They are not Down syndrome children, a label that implies that everything they are is a consequence of the condition," Marion said. "Although this difference may seem subtle, it is vitally important."

The ECU chapter started last October and is the only one in North Carolina. For more information, go to http://www.ecu.edu/ah. 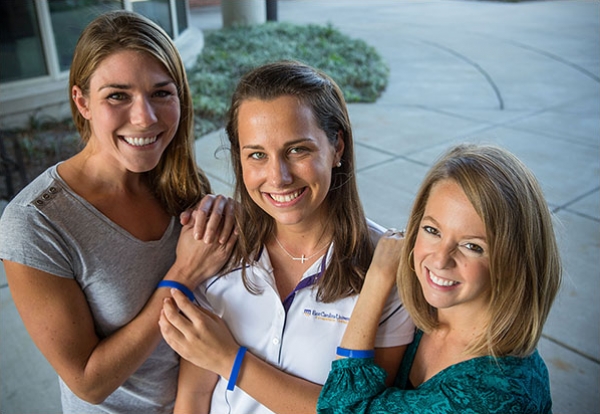