What Do You Have to Declare? | Beaufort County Now

If you've ever traveled abroad you are asked this often. It's as if you are given an opportunity to "come clean" and "lay it all out on the table." United States of America's birthday, Independence Day, George Washington, War for Independence, Benjamin Franklin
Home
Categories
Login

What Do You Have to Declare?

Login to Send a Private Message to Stan Deatherage
If you've ever traveled abroad, you are asked this often. It's as if you are given an opportunity to "come clean" and "lay it all out on the table."

Maybe this is our opportunity to do so today on what is well regarded as our nation's birthday - this Independence Day. Possibly, you may just have a day off in the middle of the week, if you possess the personal industry of remaining gainfully employed somewhere, doing something, and wish to just have as much fun as is possible - so have at it. Others, who enjoy a big time just as well; however, may wish to dwell upon what this annual 4th of July celebration may mean to this nation of a People made truly free by the actions of just a few.

At some point, these Americans may wish to congregate around a quiet table, gathering their loved ones close, and earnestly speak of our nation's promise born from this uncertain time as these 13 brave colonies did endeavor to sever all ties to a Great Britain that was the most mighty colonial power of its time. It was certain war, by an uncertain People, whose tremulous fate did reside in the steady hands of these 56 signers of this august Declaration.

These 56 representatives from our original 13 colonies: New Hampshire, Georgia, Massachusetts, South Carolina, Rhode Island, North Carolina, Connecticut, Virginia, New York, Maryland, New Jersey, Delaware and Pennsylvania did embark this day some 237 years ago on an ambitious and independent path, and our nation, nay, the modern world has been the greatest, and sustained beneficiaries of their courageous endeavor.

From their collective hand, they did ratify peace and prosperity proclaimed for our people as an independent nation, but first to win that freedom, there continued a War for Independence that stretched over 7 years from Concord to Yorktown. A bitter fight that less than half of our teetering nation were willing to enjoin, but a fight that did ensue and continued until resolution.

It was a small war, that War for Independence, but it was a bitter fight by a tenacious Continental Army, with a stoic General George Washington at its cognitive core. General Washington, literally, stood tall against a British expeditionary force that was well trained, and better provisioned, and did struggle to persevere against this mighty foe, through the debilitating defeats at New York on land and Lake Champlain at sea and the terrible Winter of Valley Forge, and until a rare victory at Trenton after crossing the ice clogged Delaware River on that Christmas Eve in 1776.

It was a most difficult first year, and if not for General Washington's heroic leadership, and the profound wisdom of our Founders - most notably Benjamin Franklin - we might not have survived to know independence. Mr. Franklin toiled night and day, and often even while sleeping, to entice the French aristocracy to commit French men and material against their bitter foe, the English, on our shores and in our waters in defense of our struggle for liberty. Understandably, it was a liberty hard won that, ironically, would serve the French, if only by example, to similarly achieve on their Bastille day, July 14, 1789.

The gregarious Mr. Franklin knew what these young states united were tasked with when he did all that he did to effect a unanimous ratification of that Declaration, which is best personified by the events surrounding this brief exchange by Franklin with one of his fellow Philadelphians in front of Independence Hall after the full ratification of that blessed document:

Anxious citizens gathered outside Independence Hall when the proceedings ended in order to learn what had been produced behind closed doors. The answer was provided immediately.

A Mrs. Powel of Philadelphia asked Benjamin Franklin, “Well, Doctor, what have we got, a republic or a monarchy?”

With no hesitation whatsoever, Franklin responded, “A republic, if you can keep it.” 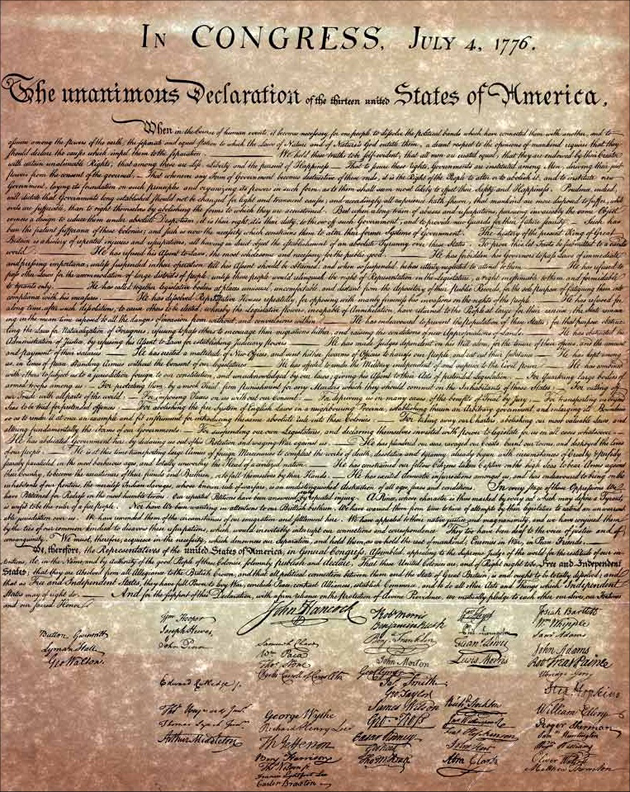 A tattered and aged copy of what this nation did declare, made free by our Founders and continued to be made free by the blood of our patriots, and today acknowledged on our 237th birthday: Above.

May we citizens of this modern American Land deserve this Republic and always endeavor to keep it whole and keep it safe "from all enemies foreign and domestic".

To do such will take more than lip-service from a population far removed from any real sacrifice, save our brave soldiers that are trained by the best to be the best the world has ever known. May we collectively deserve this great nation and those that have sacrificed so much for us to endeavor to make it, to keep it. May we declare our allegiance to those principles that made us great, and keep us safe so that our children and grandchildren shall continue to thrive.