Smoke on the Water is a yearly fall festival in Washington, North Carolina that includes music, food, and other festivities for the whole family music, food, bbq, chili, smoke on the water, washington nc, pamlico river waterfront
Home
Categories
Login

Smoke on the Water - Downtown Washington

Saturday October 24, 2009 was a day of celebration for the people in eastern North Carolina hosted on the beautiful waterfront in the town of Washington. Smoke on the Water is a yearly family festival that brings great BBQ, chili, music and festivities right down to the Pamlico River waterfront. Starting at 10:00 am and ending at 6:00 pm the day is filled with events for the entire family to enjoy. 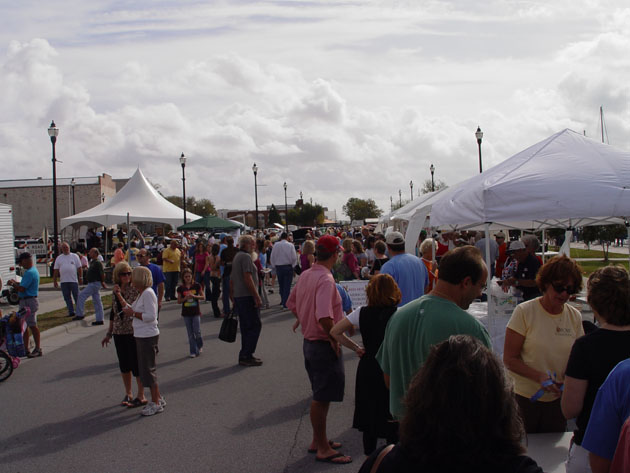 Starting in the west end of the waterfront there was a faux fossil dig for the kids to enjoy courtesy of PCS Phosphate. From what I heard from the friendly staff at the waterfront docks the local mining company dropped off a load of soil from their Aurora plant for people to sift through to potentially find some fossils, often times consisting of shark teeth. In fact, Stephanie Mellott one of the members of the waterfront docks showed me her lucky find below: 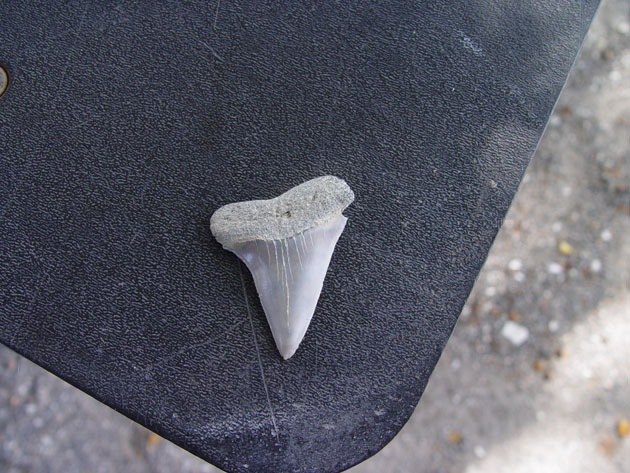 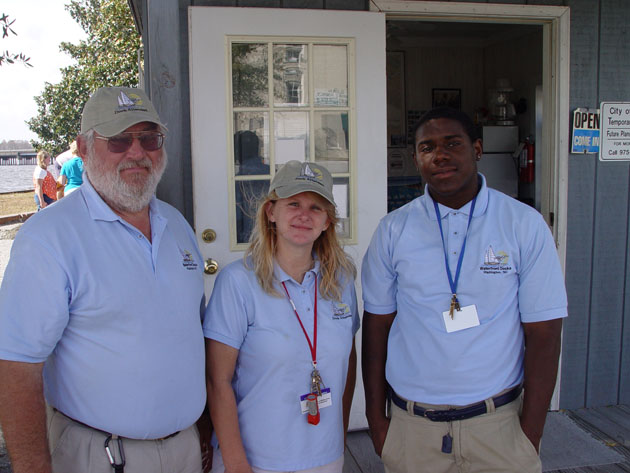 Above is (left to right) Rick Brass, Stephanie Mellott, and Daykuan Mackey of the Waterfront Docks. 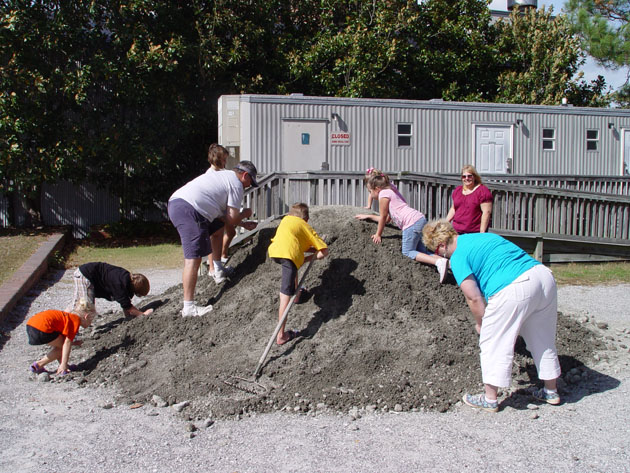 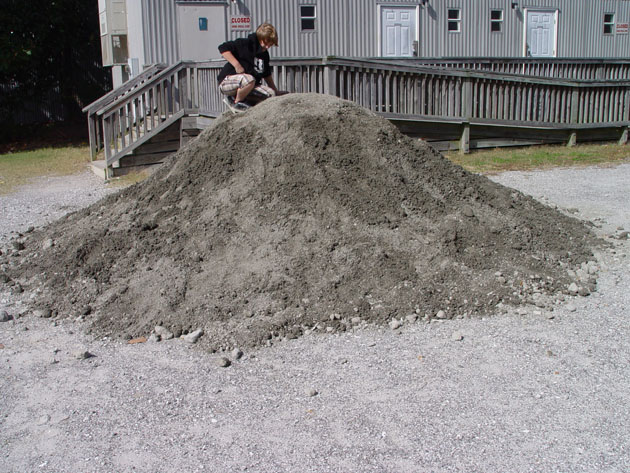 Above Bailey Ramirez atop the fossil dig mound.

As I explored further into the epicenter of this festival I came one of the events I was most excited to check out: the tunes. There was a great line up of local musicians, many of whom are members of the Beaufort County Traditional Music Association and played in a variety of bands throughout the day, but there were others as well such as Groves Sound from Wilmington that consists of Rick Groves and Neil Horne. They were an acoustic guitar and bass combo that played a mash-up of country, rock, and jazz. I would best describe it as an acoustic alternative rock sound that was stripped down to just guitars and vocal harmonies. They caught my eye (or should I say ear) from the very beginning of their set when they played a great version of “Revelation (at 70 mph)” 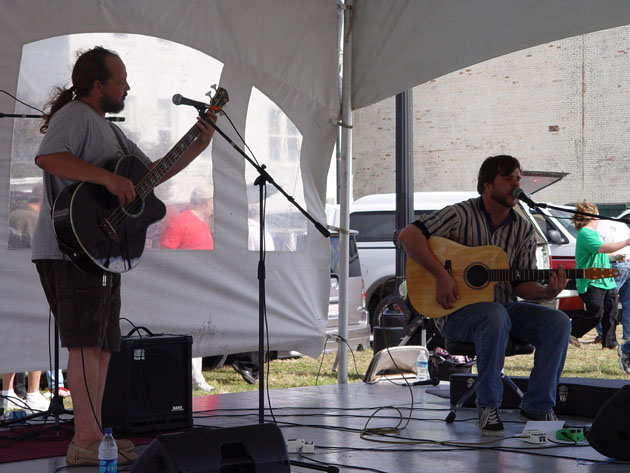 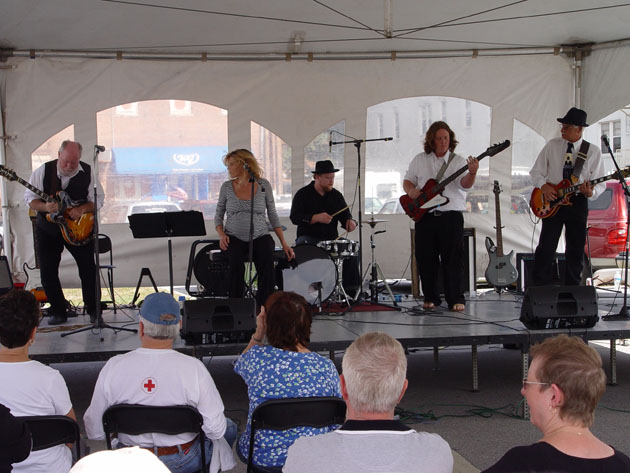 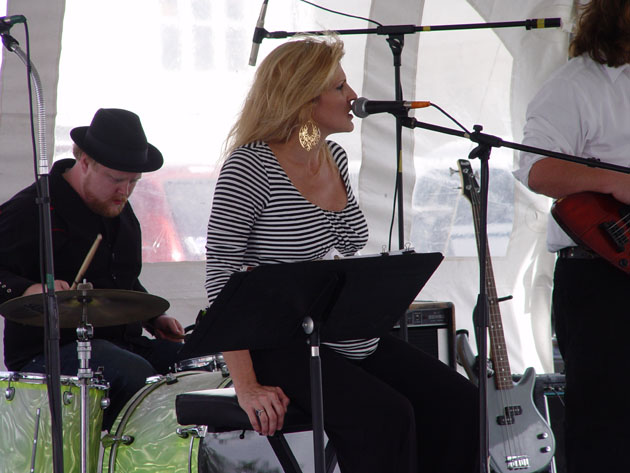 Prior to Groves Sound Smoke on the Water patrons were treated to a great mix of traditional music from Tried & Blue which are featured in the images above. They consist of J. Alan Casey on drums, Don Skinner on rhythm guitar, Darren Smith on bass, ‘Big Poppa Sid’ Rothchild on lead guitar, and Teresa Prichard handling the lead vocal duties. These guys are very talented and if you spent most of the day hanging around the stage you saw many of the same faces throughout the day performing in different roles. As mentioned earlier many of them were associated with the Beaufort County Traditional Music Association and for more information about getting involved or just checking out some really good music you can check out their myspace page here.

Another fun event that sparked the interest of enthusiasts and passersby alike was the car show. There were numerous makes and models of all kind with one main thing in common dedication. The guys and gals behind these vehicles have a passion that shines through brilliantly in their final products. The attention to detail and pure beauty of many of these vehicles was very impressive. As the rain started coming down at the end of the awards ceremony I was able to get a brief moment with David Schwerdtfeger of New Bern who won Best Truck in Show. The pictures of his winning 1955 Chevy truck are below: 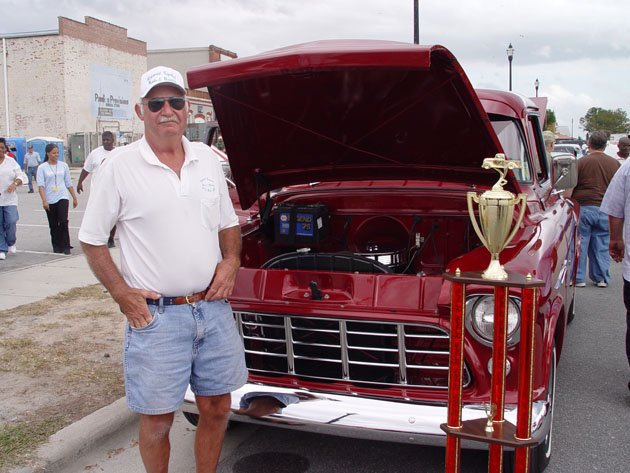 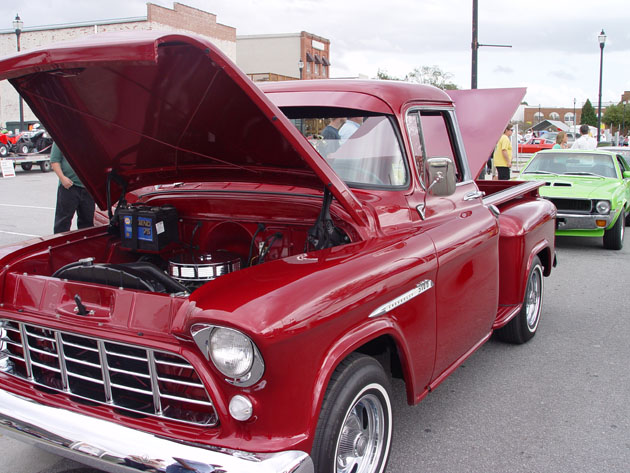 Prior to the car show completion and awards ceremony there was another interesting event helping to promote the new dog park that has recently opened in Washington. The pet costume contest and parade started at Festival Park and made its way west through the heart of the Smoke on the Water festival with the dogs and their owners traveling through with pride. 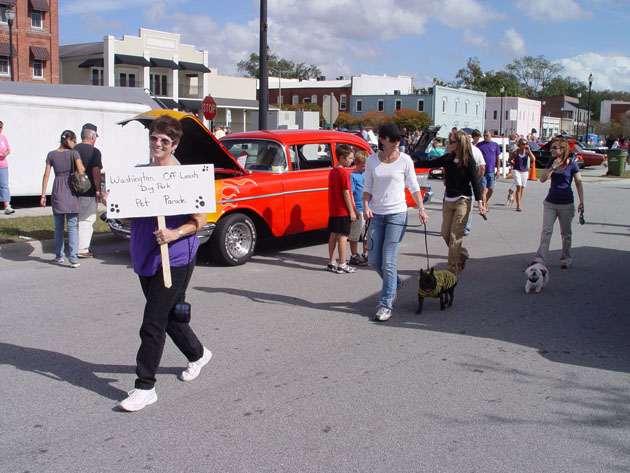 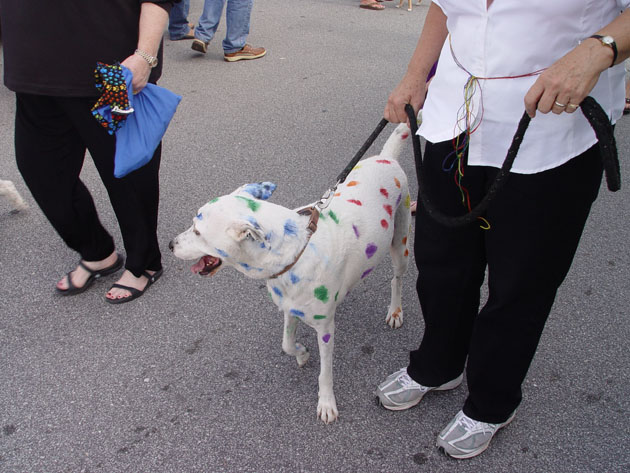 At the heart of this celebration lies the food. For years the festivities have revolved around the wonderful bbq and chili that is made by locals with their outstanding recipes. This year I arrived about 30 minutes after it started and by that time the winning chili had been sold out so I was not able to talk to the winner of this years chili cook off. However, I was able to speak with the runner up and taste a few others as well which were very good and from what I understand the difference between the winning chili and the runner up was a single point. At any rate, it was a treat to get to taste the many other chili’s that were out there and I think the toughest job would have been one of the judges for the competition. 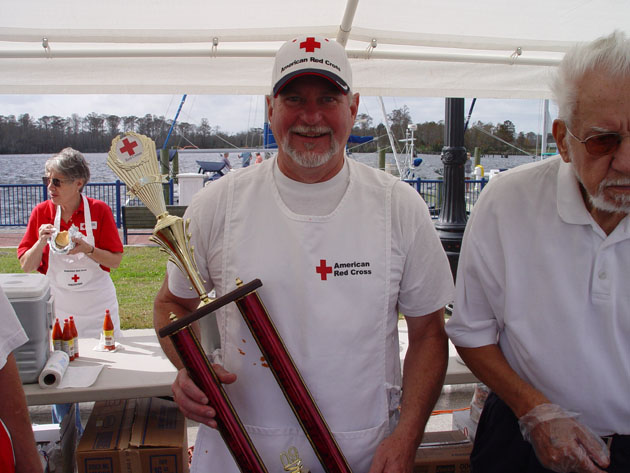 Pictured above is Ed Summerfield who was runner up in the chili cook off competition as well as a chairperson for the local Red Cross. His wife Kay is also a chairperson for the same local Red Cross and I was able to spend a few minutes with her to get a little insight into the chili competition this year as well as a bit of background about Ed’s chili in particular.

First of this was Ed’s 5th competition he has entered in the last few years counting some time he spent in his native state of New Jersey and I must say his chili was outstanding. Like I said before I did not get the pleasure of tasting the #1 chili this year, but if #2’s was any indication I am sure I would have been impressed.

This year the Red Cross stepped in and made sure that the chili competition at Smoke on the Water went off without a hitch. In years past the recently deceased, Gary Tomasulo, took care of the coordination effort, but due to his untimely death his friends at the Red Cross stepped up to the plat. Mr. Tomasulo was a local resident who was very involved with promoting downtown Washington, NC. Besides his duties as an organizer for Smoke on the Water he was president of the Historic Downtown Washington Merchants Association. His loss has been felt by many and it was truly a great thing for Ed, Kay and the rest of the Red Cross in Washington to step to the plate and make sure his role was filled, especially for an event he was so much a part of in past years.