A case of the pot calling the kettle black | Beaufort County Now | Coke is woke but forgets its legacy. Careful when you throw rocks and live in a glass house.

A case of the pot calling the kettle black 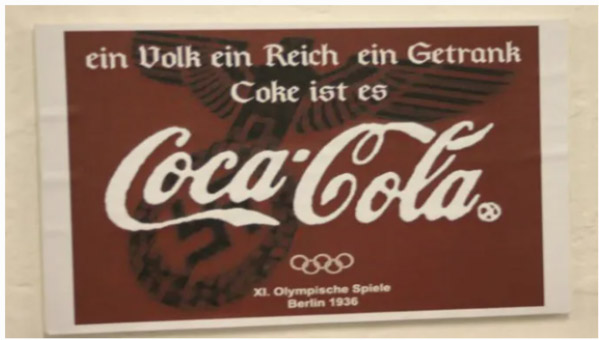 J. B. Shurk, writing at the American Thinker, says:

Woke Coke seems less concerned with selling sugar water these days than selling Americans on the idea that whites are not worthy of respect or equal protection under the law.  A few weeks ago, a whistleblower revealed Coca-Cola’s discriminatory employee training program equating racism with “whiteness.”  In a series of online work assignments, Coke goes so far as to instruct its white employees to, “try to be less white.”  How does one “be less white”?  Coke answers that explicitly: by being less “oppressive,” “arrogant,” “certain,” “defensive,” and “ignorant,” and being more “humble” and “break[ing] with white solidarity.”  For Coke, judging people based on the color of their skin is not only tolerated but also company policy.

If the company’s “de-whitening” efforts weren’t sufficient proof that Coca-Cola prioritizes a person’s skin color over a person’s talents and individual character, it drove the point home with a letter sent to its outside legal counsel demanding that law firms assign attorneys representing the Coca-Cola Company based, not upon the quality of lawyers’ work, but rather upon lawyers’ racial classification.  Going forward, Coke will penalize and reduce its fees to law firms unable to hit certain racial quotas.

Now Coca-Cola’s CEO is joining other race hucksters to claim that sensible voter ID laws meant to curb fraud in Georgia’s elections should be seen as nothing short of white Americans’ attempt to disenfranchise black voters — a loaded accusation not based in reason or analysis of the law’s merits but rather in raw emotionalism intended to pit one group of Americans against another.

Surely a company that regurgitates nasty racial stereotypes against whites so effortlessly while seeking to eliminate them from its workforce doesn’t really believe white people can ever scrub all that icky whiteness away for good, no matter how many rounds of re-education they are forced to endure.  As Coca-Cola’s training materials suggest, racism is just part of whites’ DNA.  Perhaps the company could have saved future employees a lot of trouble by simply hanging a sign on its front door reading, “No Uppity Whites Allowed.”

Racial stereotypes, racial classifications and quotas, explicitly racist indoctrination — why is Coca-Cola so obsessed with discriminating against people based on the color of their skin rather than evaluating all of the individual characteristics that make each person a unique member of the human race?  Perhaps racism is in the company’s own DNA, not at all different from the way the beverage company judges white Americans as racists for historical injustices in which they claimed no part

Did you know that Nazi Germany was one of Coca-Cola’s biggest markets?  Have you ever seen an official Coca-Cola advertisement promoting the company’s partnership with the Nazis during the 1936 Olympics under a jingoistic tagline — “One people, one country, one drink, Coke is it” — that would have made Adolf Hitler proud?  No?

Does Coca-Cola not highlight its financial history with Nazi Germany when crowing about its racial purity tests today?  Or the fact that Germany’s inconvenient declaration of war against the United States made it sufficiently difficult for Coca-Cola to maintain its prominent reputation within the Reich that the company’s German representatives repurposed the operations of hundreds of bottling plants toward the production of a new drink called Fanta to serve thirsty German soldiers throughout the war?  Does the Coca-Cola Company not brag about Fanta’s wartime genesis as a Nazi beverage?  How strange.

One would think that a company so dedicated to rooting out “white supremacy” that it forces its white employees into racial re-education training seminars would first want to take a hard look at its own rather awkward historical relationship with actual white supremacists intent on building a world-dominating “master race.”  That’s what “racial justice” requires, right — the punishment of one generation of Americans for the sins of generations past?  So why should Coca-Cola’s questionable corporate history be off-limits when it goes out of its way to demonize white Americans for no other reason than the color of their skin?

On the other hand, everything about Coca-Cola’s racial indoctrination program today sounds as if it could be ripped right from the pages of Nazi Germany’s own race laws, with Jews and other “undesirables” being crossed out and “whites” scribbled in their place.  All the racial animosity that nearly destroyed humanity last century is back in “woke” form, and some of the same companies that underestimated the Nazi threat then are underestimating the evil intent of the new racialist agendas that are taking over the corporate world today.  Isn’t that, after all, why Critical Race Theory exists — so that pretend intellectuals can repackage discredited race-based theories from the past into academic language that can be used once again to justify outright racism?  If so, 2021 Coke and 1936 Coke still have much in common.  The only thing really differentiating the symbolism of a Nazi swastika and a Black Lives Matter clenched fist, after all, is which racial group is being targeted and which racial group is doing the targeting.

There is nothing new under the sun.  Perhaps if Coca-Cola were capable of seeing the similarity between the racial grievances of its old Nazi partners and those of its new “woke” ones, it wouldn’t be so enthusiastic to repeat history all over.  And maybe if Coke remains so intent on “cancelling” white Americans for the problems it sees in America’s history, then Americans should cancel Coke for the problems it overlooked in Nazi Germany’s.

Source:  Maybe Coke Should Be Cancelled for Its Nazi Past - American Thinker

Hat tip to Carole Gunn for sending us this link.