Login to Send a Private Message to Stan Deatherage
Publisher's note: This is a significantly older post that got a bunch of views backk in the day. Notice how the images were treated way back then in the early days of BCN. Since then, much has changed.

Rising high from the foothills and lower piedmont of North Carolina, the South Mountains Range of North Carolina is a unique geological formation that boasts streams leading to waterfalls, such as the High Shoals Waterfall that I visited, and some elevations approaching 3,000 feet above sea level. South Mouth Mountains Range, where once gold was mined beginning in 1826, comprises 100,000 acres (156 square miles) located in three counties: Burke, Cleveland and Rutherford. South Mountains State Park encompasses 18,000 acres of the entire mountain range, and is the largest park in the North Carolina State Park System. 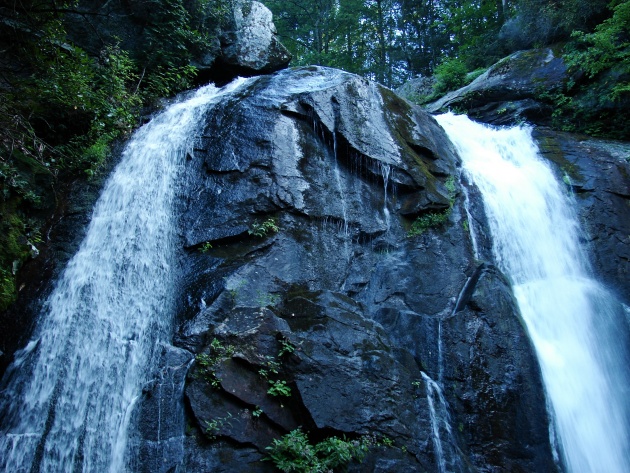 South Mountains State Park is not too far from Interstate 40, as the crow flies, but by the lower mountain roads, however, it is a slow ride. My route from Hickory (within the Catawba River Valley), North Carolina, where I just finished a conference as the voting delegate for my county, was a meandering route from NC Hwy. 127, then to NC Hwy. 10, then to NC Hwy. 18, and then to Old NC Hwy. 18 (the State Park signs begin here), then to SR #1901 and then to SR #1904. But do not take these directions as gospel; use the well defined map below - the click-through larger version. 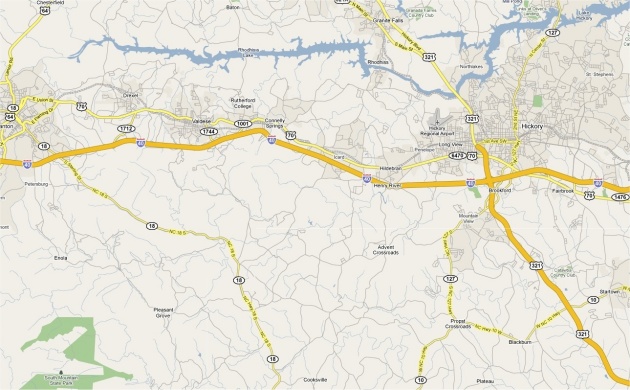 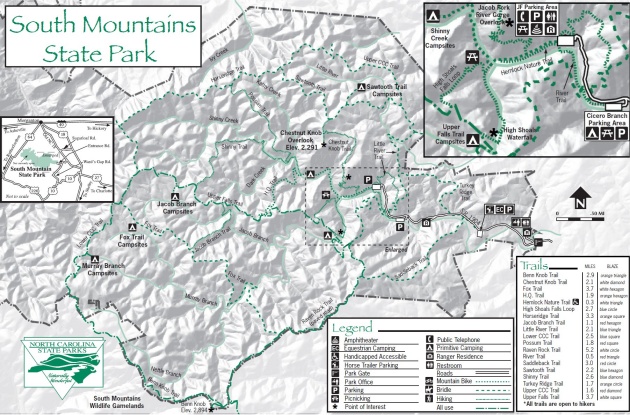 We arrived late in the day on this Indian Summer Saturday, and with the days getting very noticeably shorter, we did not tarry along the 1.2 miles (2.7 miles along the loop trail) of one trail leading to the Deep Shoals Waterfall, near the headwaters of Jacob Fork River. As we worked our way higher toward the 80 feet tall waterfall, through the gorge where runs Jacob Branch, I noticed the absence of any discernable light from our local star. We had nearly two hours of daylight left in the day, and it seemed like sundown was imminent. Consequently, I shot all pictures at a very slow shutter speed along the trail, and used a makeshift tripod to shoot all the pictures near the waterfall (also shot at very slow shutter speeds: 1/20th to 1/25th of a second). Below are a number of pictures of our trek up the rocky trail to the Deep Shoals Waterfall. 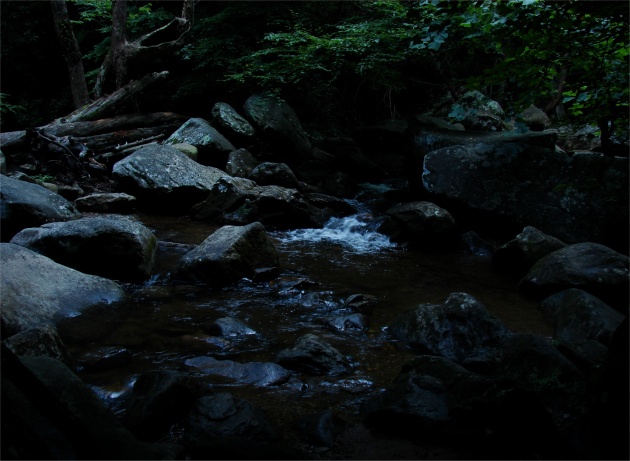 The rocky bottom of Jacob Branch: Above. The well maintained bridge across some fairly large rocks that litter the mountainside trail leading to the waterfall: Below.     photos by Stan Deatherage 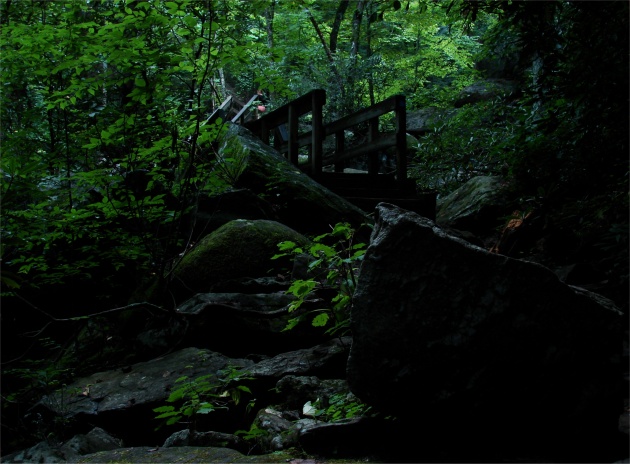 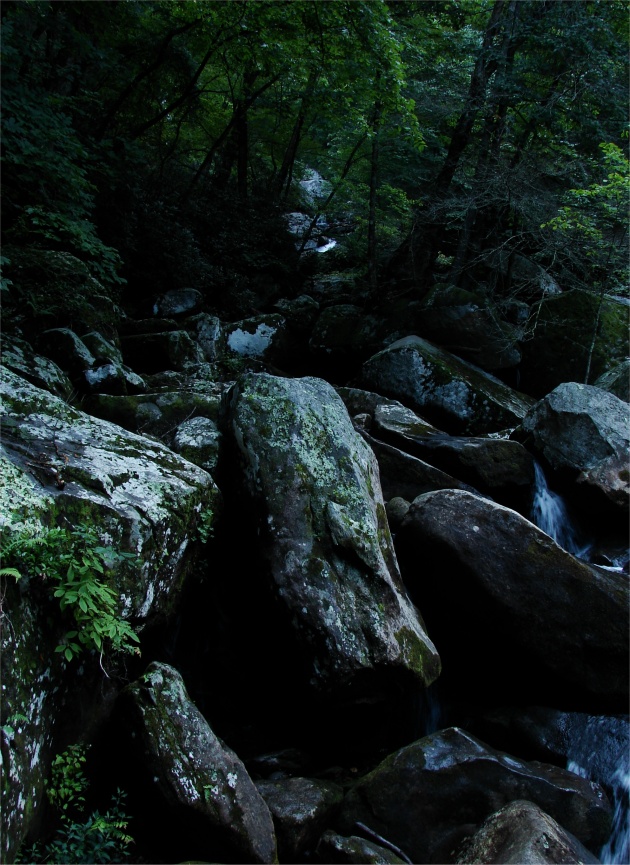 The boulder strewn gorge leading to the headwaters of Jacob Branch: Above. The flow of Jacob Branch is comprised of many small flows, like this one pictured, leading downhill on its eventual path to the Catawba River, and eventually the Atlantic Ocean: Below.     photos by Stan Deatherage 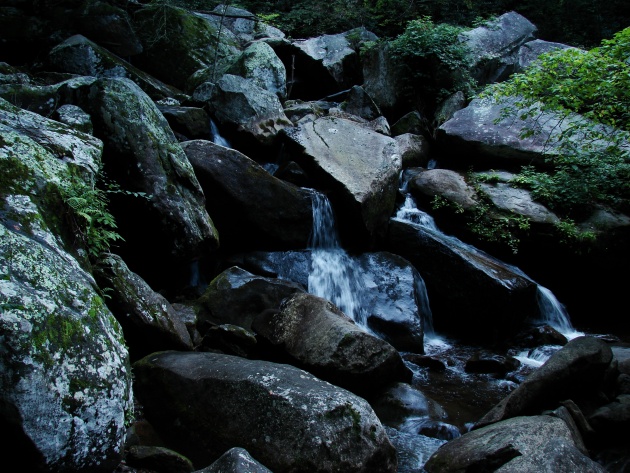 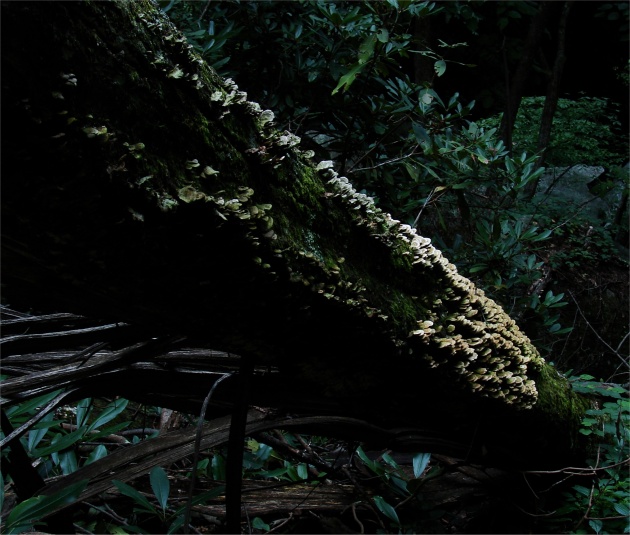 Fungi feeds upon and decays the large fallen tree top along the trail higher: Above. Finally reaching near the top of the of the Deep Shoals Waterfall, where I use the makeshift tripod to get some pictures, of which, I will share a few with you to conclude the pictorial: Below.     photos by Stan Deatherage 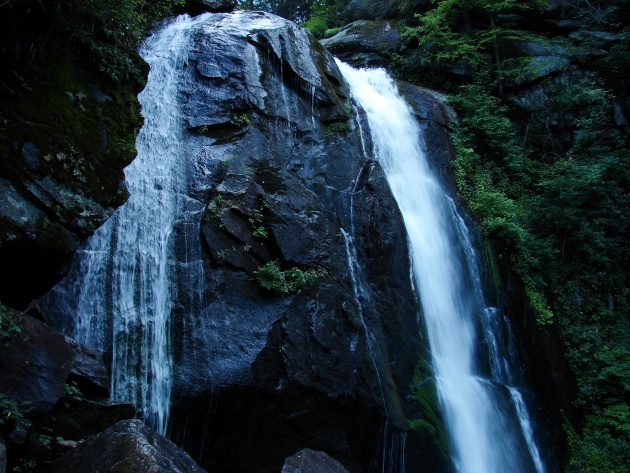