North Carolina will have to ramp up its fight against the COVID-19 pandemic before thinking about restarting its economy, a roadmap by Scott Gottlieb warns. carolina journal, businesses, trouble surviving, coronavirus, pandemic, covid-19, recommendations, april 2, 2020
Home
Categories
Login 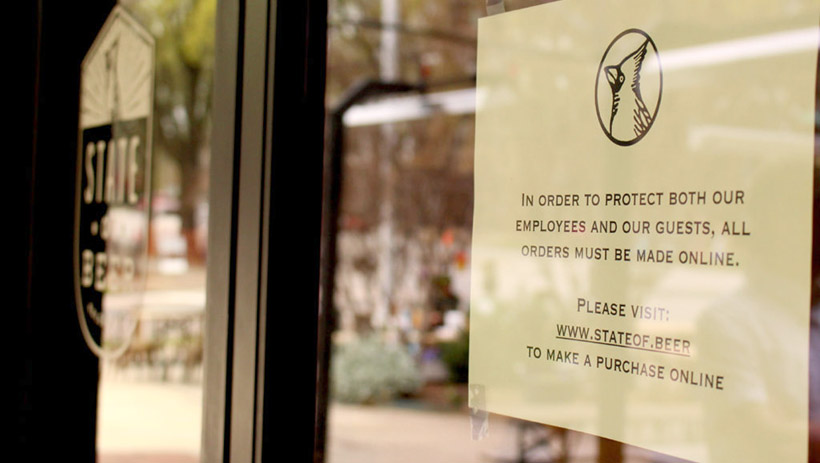 State of Beer, a downtown bottle and draft shop, only takes online orders due to COVID-19 pandemic | Photo: Rachel Vachon

North Carolina will have to ramp up its fight against the COVID-19 pandemic before thinking about restarting its economy, a roadmap by Scott Gottlieb warns.

Gottlieb, a scholar at the American Enterprise Institute, is a former Food and Drug Administration commissioner under President Trump. Gottlieb suggests a longer wait before Americans get back to work and social distancing measures end.

Whether the state can actually satisfy Gottlieb's proposals remains unclear, and businesses say they won't survive if the state adopts those measures fully and shuts down the economy for weeks or months.

Under Gottlieb's plan, social distancing would remain until new cases declined steadily for two weeks - and until all residents with COVID-19 symptoms could be tested and hospitals had the capacity to care for all patients. That would require a national capacity of at least 750,000 tests per week and a doubling of the nation's supply of critical-care beds and ventilators.

Even then, some physical distancing measures would continue, as would limits on gatherings. Schools and businesses would reopen in phases, but older adults and other at-risk people would take extra precautions. Restrictions wouldn't completely disappear until effective treatments or a vaccine was available.

Such measures would hurt the state even more. Businesses are already furloughing and firing workers, and many say they won't survive if restrictions continue for weeks or months.

More than 300,000 people filed for unemployment in the two weeks since the outbreak began to affect the state's economy. That dwarfs the Great Recession, when 25,000 people filed claims in a month. Cooper said the agency is buried under a "mountain of claims," and it remains unclear how soon checks will go out.

Congress's coronavirus relief bill aims to soften the economic blow, but businesses question whether the measures will roll out in time - and whether they'll be enough if lockdowns drag on.

"It's a much more draconian plan," said Jordan Roberts, John Locke Foundation health care policy analyst. "We obviously can't ignore this highly contagious, spreading, deadly virus that has the potential to overrun our hospital systems. But we still have to weigh that against the impact this has on the rest of the economy."

A thicket of regulations has left North Carolina less prepared for the pandemic, and the state has a bigger lift than most to meet Gottlieb's suggestions and get its residents back to work.

North Carolina had 2.1 hospital beds per 1,000 residents - putting the state behind the national average of 2.8 hospital beds in 2016, and below both Spain and Italy, which have been pummeled by COVID-19 and are rationing care.

Gottlieb wants hospital capacity to soar before people return to work. Ideally, areas would have five to seven critical care beds and ventilators per 10,000 adults. That's an ambitious lift for North Carolina, which lags behind the nation in its supply of medical care. North Carolina had three intensive care unit beds per 10,000 people, but less than one empty ICU bed per 10,000 people, according to the state's most recent data.

North Carolina has temporarily lifted state caps on hospital beds, waiving Certificate of Need laws that restricted the supply of medical care to keep costs low. Hospitals are now free to add beds, but staffing those beds remains a concern.

"CON laws mean that we have less medical equipment and beds than we'd otherwise have. That's what CON is designed to do," said Joe Coletti, JLF policy analyst. "Whether we have enough to meet the need is a different question, based on forecasts built on models with incomplete data."

More than a million people have been tested in the U.S., which is now conducting 100,000 tests a day. North Carolina completed 23,106 tests as of Wednesday, April 1. The state is struggling with testing shortages and backlogs, and it has pivoted away from testing in tracking COVID-19.

"There's a strong and understandable desire to return to better times and a functioning economy," Gottlieb tweeted. "But it should not be lost on anyone that there's no such thing as a functioning economy and society so long as COVID-19 continues to spread uncontrolled in our biggest cities."

Will businesses survive the lockdown?

But if social distancing continues for weeks or months, North Carolina businesses fear for their future.

Many restaurants have shut down entirely, and less than a quarter of hotels remain partly open. Even the restaurants doing takeout are operating with a "skeleton staff," and many are losing money. Some are forgoing payments and firing workers, but still finding themselves cash-strapped, said Lynn Minges, N.C, Restaurant & Lodging Association president.

"They are not making money, just enough to pay a few of their bills. But not all of them," Minges said. "It's really getting quite critical quickly."

Many would not survive if restrictions continued for months, Minges said.

"It's greatly reduced every week, as is every industry out there. Period," Brisson-Kuester said. "We have to walk a fine line between shutting all business down to a screeching halt and tackling this medically. I know we have to flatten the curve. ... But reality is that if we don't get ourselves back to work, in some capacity, there will be no recovery."

Every $100 million of lost economic activity results in an anticipated death, says Kip Viscusi, an economist at Vanderbilt University who developed a statistical model estimating the value of an individual life.

"[The deaths] could be suicides, less money to afford health care, less money to live in a safer neighborhood," Viscusi said. "The mortality rate goes up when the income level drops. ... If you take a $100 million loss, spread across people who work hourly jobs, it could have a severe adverse health effect."

But social distancing policies will prevent bigger economic losses, based on the statistical value of people who survive, Viscusi says.

"There's clearly going to be an economic loss, but in return for this we're saving lives," Viscusi said. "I think the economy is going to rebound."