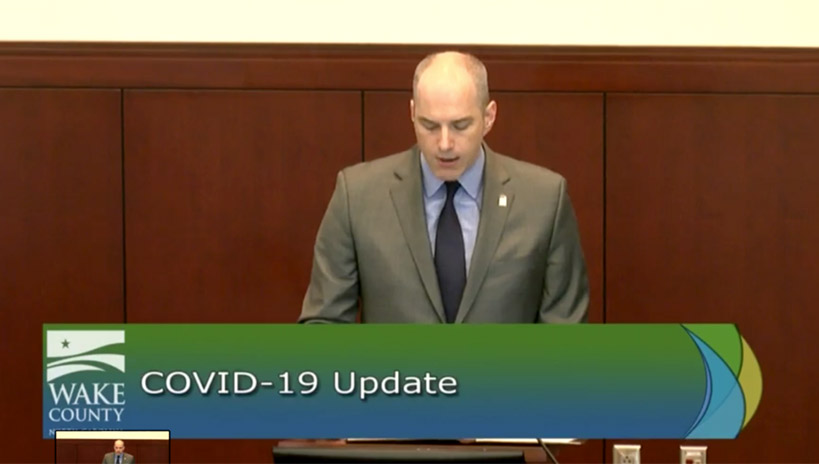 Responding to the coronavirus outbreak, at 5 p.m. Friday, March 27, more than a million more North Carolinians face a stay at home order, issued Thursday afternoon by the Wake County Board of Commissioners.

Aside from unincorporated sections of Durham County, the entire Triangle is under similar restrictions. (Durham County may issue an order Friday afternoon, according to media reports.) Statewide, about 4 million North Carolinians are under some form of mandate to limit movement.

Wake County's proclamation lasts until April 17, unless it's extended. It has exemptions, mostly related to health care, food, safety, and government operations. Agriculture, construction, and banking are exempt. So are pharmacies, and grocery, hardware, and convenience stores, among others. Section 10 of the order spells out the business categories excluded.

Even so, the mandate will shut dozens if not hundreds of businesses and idle thousands of workers.

At a Thursday news conference, Wake County Sheriff Gerald Baker suggested the county wouldn't enforce the measures aggressively, at least on highways. No roadside checkpoints, for instance. Law enforcement officers aren't likely to detain suspected violators and instead ask them to return home.

Those arrested face a misdemeanor 2 charge, which normally entails a fine rather than jail time.

In an interview Thursday with WRAL News, Gov. Roy Cooper said he'll "ratchet up" restrictions statewide soon. But he's leaving stay at home decisions to local officials, noting that a statewide order would affect rural and urban areas equally. He said it's important to both protect public health and maintain commerce.

"We're fighting a two-front war. The No. 1 front is health care, saving lives, public safety. But also, the second war that we have to fight is people who are struggling right now, small businesses that are struggling because of this pandemic. We need to help them as well," he said.

Cooper will hold a news briefing at 4 p.m. Friday with updates. View the livestream HERE.