WASHINGTON, N.C.     Gamma Beta Phi, the honor society at Beaufort County Community College, inducted 52 new members into its organization on March 11. Members of the honor society achieve academic success, and they also take on projects that help some of the most in need in our community. BCCC's Gamma Beta Phi chapter was one of only six chapters nationwide to be recognized last year as an Exemplary Chapter. 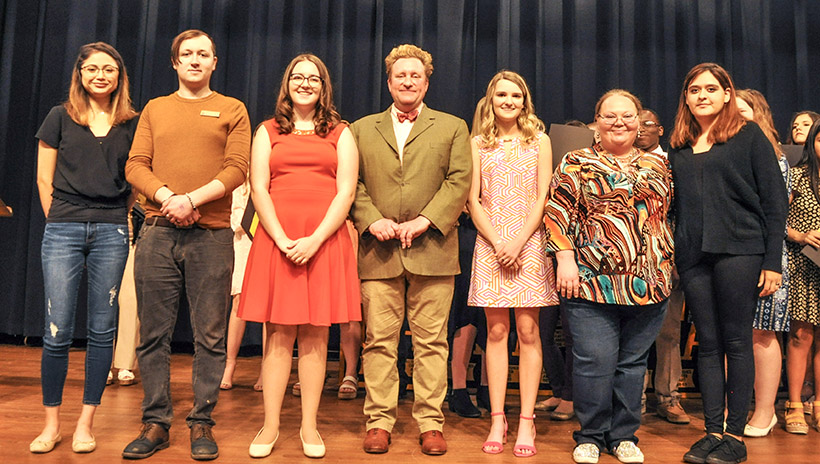 During the fall 2019 semester, the honor society continued its strong history of fundraising and community service with a donation of $900 to The Arc of Beaufort County by raffling off three gift baskets filled with donated merchandise from Washington businesses. The Arc is an organization for people with intellectual or developmental disabilities and their family members.

In the past, Gamma Beta Phi has raised funds for the Open Door Community Center and Zion Men's Shelter and Kitchen. It also joined with the Student Government Association last fall to gather donations for the survivors of Hurricane Dorian on Ocracoke. In 2019, then-secretary Madison Bunting was awarded the Gamma Beta Phi Leadership Scholarship, one of only two recipients in the nation.

Christopher McDuff, GBP Regional Senator & National Executive Committee member, gave the keynote address. McDuff is currently a student at Durham Tech and working on multiple associate's degrees. He described himself as a lifelong learner who returned to college later in life.

Members of Gamma Beta Phi must be presently enrolled at BCCC and committed to excellence in education, to good character and to service. They must have completed 12 or more semester hours of college work and pay the one-time national membership fee of $70.00 along with local dues of $8.00 per semester. Members cannot have their grades drop below a GPA of 3.2 and must have a GPA of 3.5 to be join.

Proud new members of Gamma Beta Phi joined the nationally recognized honor society chapter at BCCC on March 11. While all new inductees are not pictured, a total of 52 students were inducted.