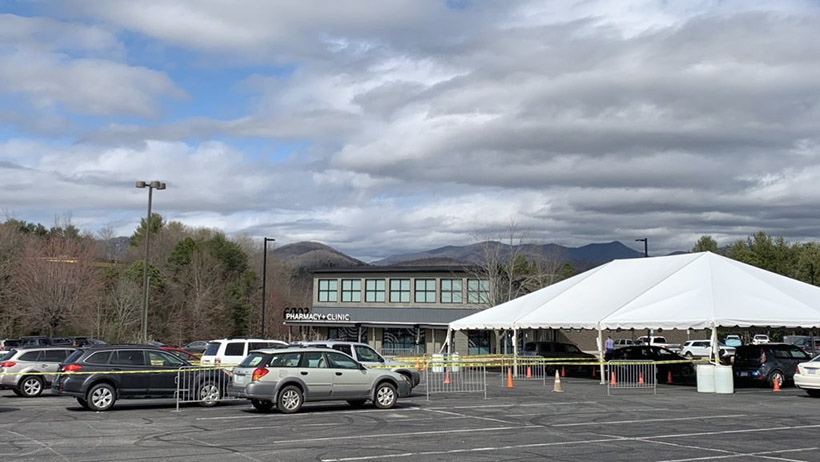 As the virus spreads in North Carolina, local doctors are setting up drive-through clinics as providers scramble to get enough tests for patients. The U.S. Centers for Disease Control and Prevention has been blasted for how it managed the rollout of COVID-19 tests. After the CDC created unreliable tests and lagged in production, companies from the private sector have begun to produce new coronavirus tests.

"Social distancing" is the state's leading strategy to combat the virus. But public health officials need to know who to quarantine. That's where testing comes in, and local doctors are stepping up with privately provided tests.

"Everybody has to help out," said Dr. Dale Owen, Tryon Medical Partners chief executive officer. "It's war, right? We're not carrying guns, we're carrying stethoscopes. We all have to help one another. That's what we're doing. There's no way our system can handle what's coming down the pipes."

North Carolina had more than 30 confirmed COVID-19 cases on Monday, March 16. Gov. Roy Cooper declared a statewide emergency last week. He then closed K-12 public schools, and shut down gatherings of 100 or more people. State health officials have since suggested following the CDC's guidelines, which discourage gatherings of more than 50 people.

Vickery expects to see at least one patient test positive for COVID-19. Several patients at the Sona Clinic's drive-through clinic had "concerning" travel histories, and one was exposed to someone with a confirmed case of COVID-19. Tryon Medical Partners reported its first COVID-19 case Monday.

COVID-19 is almost twice as contagious as the seasonal flu and at least 10 times more lethal, according to current estimates from the World Health Organization.

"We needed to get testing started in our community," said Vickery. "We didn't want to waste more time. We're already late with this thing, so the sooner we can start getting testing, the better."

With COVID-19, the average infected person spreads the virus to roughly two people. As far as past outbreaks go, that makes COVID-19 more contagious than H1N1, but less so than SARS, according to the World Health Organization.

Scientists are still calculating the actual severity of COVID-19. The WHO currently estimates the death rate at 3.4%, but experts say it could drop as low as 1% once more mild cases are diagnosed. That would still be 10 times more lethal than the seasonal flu.

Vickery wanted to help slow the spread of the virus and "get the job done in the safest way possible."

He turned to drive-through clinics.

"If these people are walking into the ER right now and the health centers, and some of them have this virus, that would just be terrible," Vickery said. "But now we're able to contain it within their cars, they're not exposing anybody else."

Vickery and Owen say most of their kits were provided by LabCorp, a private company that has partnered with the government to provide tests for COVID-19.

Vickery's team had roughly 80 testing kits, but getting enough kits was still a problem, said Vickery.

"We need to stop [spread] and prevent it from being so bad," Vickery said. "Or we're not going to have the resources to treat them. It's not like [hospitals] are sitting there empty, waiting for this sort of thing. The hospitals in most communities are already very busy taking care of people who have trauma, chronic diseases, heart failure."

Independent doctors have a part to play in testing patients, especially as the virus enters an exponential curve, says Owen.

"It is great that smaller practices are stepping up around the state," said Jordan Roberts, John Locke Foundation health care policy analyst. "The private sector is doing some great work by providing alternative ways to get tested that minimize chances of exposure for everyone."