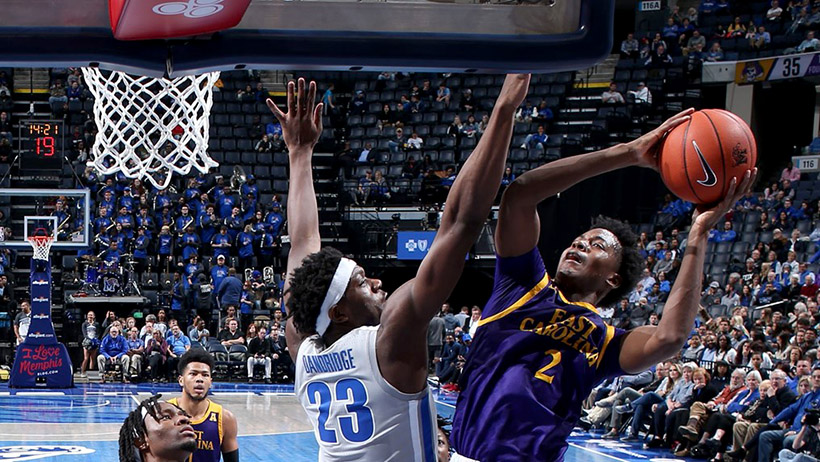 FORT WORTH, Texas     East Carolina is set to face off against Memphis in the opening round of the 2020 American Athletic Conference Basketball Championship on Thursday, March 12, at Dickies Arena. The Pirates enter the tournament as the No. 11 seed, while the Tigers come is as the No. 6 seed.

The only previous meeting between the teams this season came three weeks ago at the FedExForum when the Tigers held off ECU's furious comeback for a 77-73 victory. The Pirates trailed by 16 early in the second half but rallied to tie the game on three occasions but were unable to pull in front.

ECU freshman Tristen Newton poured in 23 point and grabbed 13 rebounds for his lone double-double of the season. Jayden Gardner added 16 points and Bitumba Baruti scored 14 points off the bench.

It was Memphis's fourth straight win over East Carolina.

Gardner finished the regular season averaging a conference-best 19.7 points per game and ranked third with 9.2 rebounds per game. He was named all-conference second-team by a vote of the league's 12 head coaches.

Newton has scored double figures in each of the last five games, scoring 20 or more in three of those games, averaging 17.6 points per game. Newton ranked fourth among his conference classmates in scoring (11.0 ppg) and led all freshmen with 3.7 assists per game. He had the second-highest overall assist-to-turnover ratio in the league (1.9).

The Pirates and Tigers have met just once previously in the postseason with Memphis defeating ECU in the semifinals of the 2011 Conference USA Championship in El Paso.

ECU enters the championship on a three-game losing streak, while the Tigers have four of their last six; a streak that began with their win over the Pirates on Feb. 19.

Memphis has held opposing teams to 36.1 percent shooting from the field this year, the lowest percentage among all Division I teams.

Freshman Precious Achiuwa was tabbed the league's Player and Freshman of the Year, averaging 15.8 point and 10.8 rebounds per game. Lester Quinones was named to the all-freshman team after averaging 10.7 points per game.