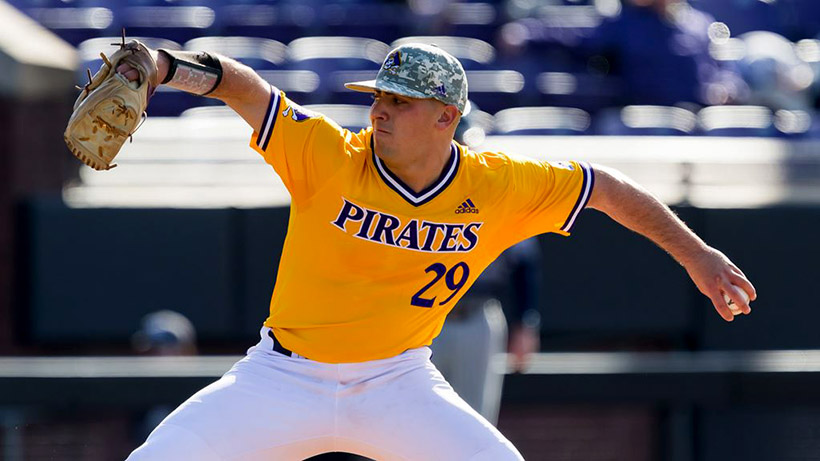 CHARLOTTE, N.C. — Alec Burleson and Lane Hoover each recorded a pair of hits, while Jake Kuchmaner allowed one run over five innings helping No. 22 East Carolina to a 4-1 series sweep over Charlotte Sunday afternoon at Robert & Mariam Hayes Stadium. With the win the Pirates improve to 12-3 on the season and the 49ers drop to 8-8. The victory was also head coach Cliff Godwin's 213th of his career passing his college coach and ECU Hall of Famer Keith LeClair for third place on the Pirates' all-time wins list.

With the game knotted at one-all after three innings, the Pirates plated the go-ahead run in the fourth for a 2-1 lead. Bryson Worrell doubled to right-center to lead off the frame and took third on Ben Newton's sac bunt back to the pitcher. Connor Norby followed with a base knock to left field easily pushing across Worrell for the would-be game-winner.

Kuchmaner (4-0) earned the win surrendering one run (earned) on five this with a pair of walks and five strikeouts in five-plus innings of work. Matt Bridges notched his second save of the season tossing 2.2 scoreless frames where he gave up two hits and struck out three. C.J. Mayhue worked 1.1 scoreless innings of relief allowing a hit, walked one and fanned one.

Andrew Roach (2-2) took the loss after he was touched for four runs (three earned) on eight hits with a walk and three punch outs in 6.2 innings. Colby Bruce tossed 2.1 scoreless frames with one strikeout in relief.

For the fourth consecutive game, ECU jumped out to an early lead when Burleson belted his second home run of the season, a solo shot to right field with two outs, for a 1-0 advantage.

David McCabe's RBI single in the third inning tied the game at one-all. Todd Elwood singled through the left side to start the stanza and moved to second on a passed ball. Dominic Pilolli followed with a walk before Kuchmaner struck out Rafi Vazquez. McCabe took a 1-2 offering to right field easily plating Elwood.

The Pirates added to their lead in the seventh pushing across a pair of runs for a 4-1 advantage. With two away and Christian Jayne standing on second base, Hoover reached on an infield single and Jayne scored from second. Following a pitching change, Hoover stole second and moved to third on a passed ball before he scored when Zach Agnos reached on an error.

Burleson and Hoover combined for half of the Pirates eight hits on the day. The pair also drove in a run along with Norby, who had four RBI on the weekend.