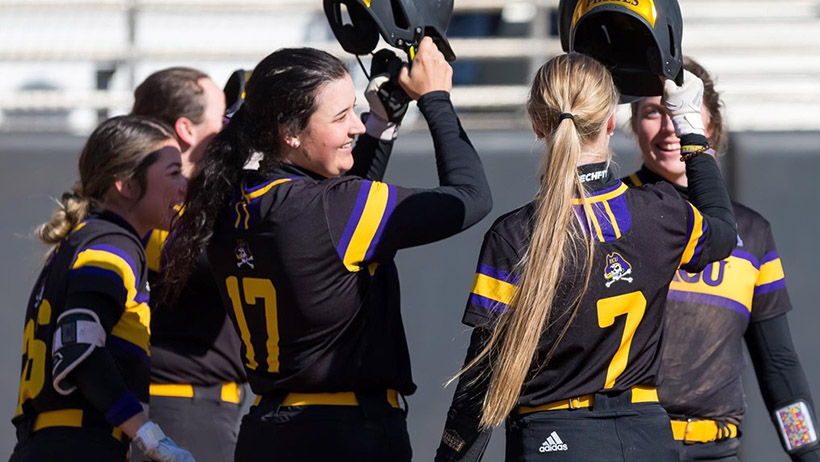 GREENVILLE, N.C.     East Carolina traverses the nation this weekend when it takes on No. 25 Fresno State, BYU, North Dakota State and UC Davis in the Bulldog Classic at Margie Wright Diamond in Fresno, Calif.

ECU won three of five games at the Liberty Spring Classic last weekend in Lynchburg, Va., battling winter-like temperatures and snow flurries to pick up victories over Fairfield, Yale and Hofstra. The Pirates also fell to Butler and host Liberty.

In her first action since opening weekend, junior RHP Erin Poepping was stellar in the circle, fashioning a 2-0 record with a 0.50 ERA and 10 strikeouts in 14 innings of work. She also notched her first save of the campaign (third career). As a result, Poepping was named to the American Athletic Conference Weekly Honor Roll for the first time this season.

UC Davis brings a 12-10 overall record to Fresno following a 4-1 midweek loss to Sacramento State at home. Alyse Rojas leads the squad offensively with a .494 (40-of-81) batting average while Isabella Rojas is the team's top RBI producer with 21. Rojas also sports a .368 average at the plate. As a team, the Aggies are hitting .309 with 26 doubles, three triples and 22 home runs. In the circle, Kennedi Brown has tossed 50.1 innings and paces the unit with a 3.48 earned run average and 54 strikeouts against 27 walks. The UC Davis pitching staff sports a 4.04 ERA with 119 strikeouts and 63 walks in 149 innings of work. Erin Thorpe is in her sixth year as head coach of the Aggie program. She was the first-ever head coach at Boise State prior to arriving at UC Davis as she led the Broncos to three 30-win seasons from 2011-14.

East Carolina and UC Davis have met once on the softball diamond. The Pirates downed the Aggies by a 3-0 score back on March 13, 2010 at the Cal Round Robin in Berkeley, Calif.

Fresno State has won eight of its last nine games, including a victory over then No. 3 Texas, to enter its home tournament with a 16-4 overall record. The Bulldogs are also receiving national attention, earning a No. 25 ranking in the NFCA Top 25 Poll. Fresno State is hitting .290 as a team, led by McKenzie Wilson who tops the lineup with a .462 batting average and 30 hits. Schuylar Broussard is another offensive catalyst, pacing the squad with 28 RBI and five home runs. The pitching staff consists of four hurlers that have combined to post a 2.54 ERA with 130 strikeouts and 53 walks in 135 innings. Hailey Dolcini boasts a 7-1 record and 1.62 ERA as well as 59 strikeouts in a team-high 52 innings. Linda Garza is in her fourth season as the Bulldogs' head coach after leading the program at UC Riverside the four seasons prior.

East Carolina holds a 1-1 record against Fresno State in the all-time series. The teams last met for a doubleheader in Fresno back on March 10, 2010. The Bulldogs won the first game 1-0 before the Pirates responded with a 3-2 victory in the nightcap.

BYU holds a 13-6 overall record after winning four of five games at the Judi Garman Classic last weekend. The Cougars topped Cal Poly, Illinois, then No. 25 Texas Tech and California while falling to Boise State. BYU sports a .251 team batting average with 19 doubles, three triples and 21 home runs to its credit. Rylee Jensen-McFarland has been the squad's top offensive performer, checking in with a .429 batting average, 19 runs scored, six home runs and 22 RBI. She is the reigning NFCA National Player of the Week after batting .643 (9-for-14) with eight RBI and seven runs scored in Fullerton. In the circle, the Cougars own a 1.94 team ERA and have struck out 79 batters in 126 innings. Autumn Moffat has tossed a squad-high 57.1 innings and sports a 1.95 ERA with 38 strikeouts against only eight walks. Gordon Eakin, who is in his 17th season with the program, has led BYU to 11-straight conference titles and an appearance in the NCAA Tournament every year since 2005.

East Carolina has dropped all five of its encounters with BYU. The Pirates and Cougars most recently met in Hawai'i back on March 9, 2018 when BYU knocked off ECU by a 6-3 score in eight innings under the international tiebreaker rule.

A Look At North Dakota State

North Dakota State split four games last weekend at the Sam Houston State Bearkat Invitational to leave its overall record at 7-11. The Bison are hitting .255 as a team with Cara Beatty leading the way at .350. Sam Koehn paces the squad with four doubles and 11 RBI with a .311 batting average for good measure. In terms of pitching, Paige Vargas has thrown a squad-high 66 innings with a 4-6 record, 3.39 ERA and 35 strikeouts against 17 walks. The staff has combined for a 3.88 ERA with 70 strikeouts and 43 walks in 113.2 innings pitched. Darren Mueller is in his 19th season as the head coach at North Dakota State University and has led the Bison to 10 Summit League tournament titles over the last 11 years.

East Carolina and North Dakota State have only met one time as the Bison edged the Pirates 9-8 back on Feb. 26, 2012 at the Easton Bama Bash in Tuscaloosa, Ala.

East Carolina kicks off a nine-game homestand March 13-15 when it welcomes Sacred Heart, La Salle and Rutgers to Greenville for the Purple-Gold Invitational at the ECU Softball Stadium.