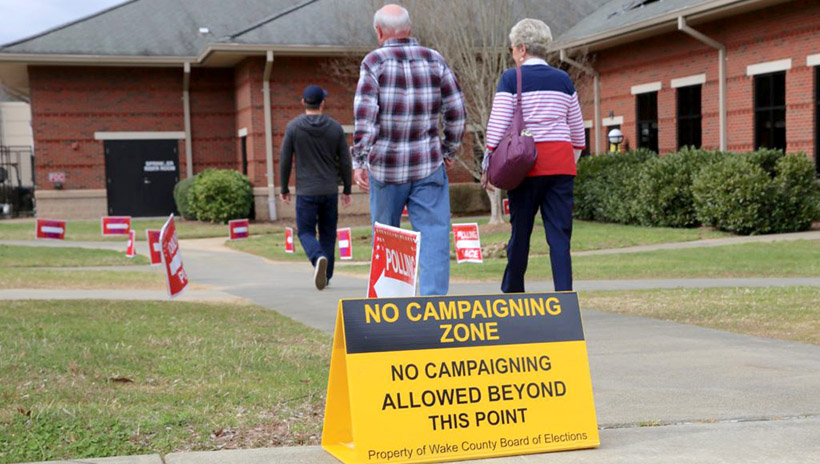 Former Vice President Joe Biden rode a big win in South Carolina to a primary surge, highlighted by an outstanding showing during Super Tuesday, a day in which he won Democratic primaries in neighboring North Carolina and Virginia. Those states carry 209 delegates.

In all, Biden, who dominated the South, grabbed a slew of delegates Tuesday, taking eight states, including Alabama, Arkansas, Minnesota, Oklahoma, and Tennessee. Sen. Bernie Sanders got Vermont, his home state, Colorado, and Utah. At press time, the winners of Texas, Maine, and California hadn't been declared.

"They don't call it Super Tuesday for nothing!" Biden said in Los Angeles.

Meantime, as expected, incumbent Democratic Gov. Roy Cooper will face off against two-term Republican Lt. Gov. Dan Forest in what many political pundits say will be among the most-watched governor's races nationally. A number of other contests will be decided in runoff elections May 12.

In a victory celebration Tuesday night, Cooper did little to tamp down expectations. He's expected to campaign heavily for Democrats at all levels.

"The very foundation of our Republic is at stake, and we have to make sure that we leave this place ready to go, go, go and win!" Cooper said.

Reviving a theme he's used often in campaign speeches, Forest said, "We believe it's time to pull all North Carolinians together to do away with identity politics."

President Donald Trump won the Republican primary in a breeze, getting more than 90% of the vote. Among minor party candidates, voters for both the Constitution and Libertarian parties chose "no preference" above any named candidates. Howie Hawkins, the Green Party candidate, won 60% of his party's primary votes.

Biden, at one point given up for dead, got an overwhelming win in South Carolina on Saturday after an important endorsement from U.S. Rep. Jim Clyburn, a fellow Democrat and longtime friend. Biden was down early, with significant losses in Iowa, Nevada, and New Hampshire, as Sanders, a Vermont Independent and avowed socialist, led the Democratic ticket. Sanders, as expected, dominated much of New England with the exception of Massachusetts, which is home candidate Sen. Elizabeth Warren but went to Biden.

"My buddy Jim Clyburn, you brought me back!" Biden told the No. 3 Democrat in the U.S. House before addressing supporters in Columbia, a Reuters story said.

Biden also got a huge boost from former presidential candidates Pete Buttigieg and Amy Klobuchar, who quit the race this past weekend and gave their collective blessing to Biden, who, it's assumed, got many votes that would have gone to them.

The earliest results from the State Board of Elections, reporting some early voting and mail ballots received by Tuesday, March 3, showed Biden with a narrow 30.2%-23.3% lead over Sanders. In those early results, former New York City Mayor Mike Bloomberg , with 18.3% and Warren with 11.3%, were the only other candidates in double figures.

Bloomberg, who spent more as much as $15 million on ads and organization in North Carolina, fell below the 15% threshold needed to win delegates and was shut out in the Tar Heel State.

In 2020, there will be 4,750 delegates: 3,979 pledged delegates and 771 automatic delegates-more commonly known as superdelegates, according to Ballotpedia.

In another race with national implications, incumbent Republican Sen. Thom Tillis and Democrat Cal Cunningham will face off for the state's U.S. Senate seat in November, after sweeping their primaries by a wide margin.

Cunningham, a former state senator with the backing of the N.C. Democratic establishment, clinched the nomination easily with 57% of the vote. His top opponent was state Sen. Erica Smith of Northampton County.

Cunningham supporters spent $13 million fending off Smith instead of focusing their energy on Tillis, Republicans said.

"I am pleased that my opponent has already accepted my challenge to participate in five debates during the general election, and believe I will be victorious in this race when North Carolinians are made aware of the stark differences between my record of common-sense conservative accomplishments and the socialist direction the Democrats want to take this country in," Tillis said in a statement.

Two candidates emerged from a field of 12 Republicans for the 11th Congressional District race. Lynda Bennett and Madison Cawthorn will head to a runoff election before the winner faces Democratic nominee Moe Davis in November.

Bennett, who got 22.7% of the vote, was endorsed in December by retiring incumbent Rep. Mark Meadows and President Trump. Cawthorn, a business owner, Millennial, and Trump supporter, trailed Bennett by only 2 percentage points. Sen. Jim Davis, R-Macon, who retired from the General Assembly after serving five terms, finished about a percentage point behind Cawthorn.

Democrats are projected to gain two congressional seats this year after a three-judge panel ordered new district maps. Democratic victories in the 2nd and 6th districts would result in an 8-5 Republican-Democrat split.

In the 9th District, Democrat Cynthia Wallace garnered enough votes to challenge incumbent Republican Dan Bishop, who has held the seat since he won a special election in September. The 10th district will feature Republican incumbent Patrick McHenry and Democrat David Parker, and the 12th District will pit Repubican Bill Brewster against incumbent Democrat Alma Adams.

For governor, Cooper defeated little-known Ernest Reeves for the Democratic nomination by a lower margin than Forest won the GOP nod. Cooper got 87% of the vote, while Forest, who faced a spirited challenge from Rep. Holly Grange, R-New Hanover, wound up with nearly 90% of the vote.

Cooper and Forest meet in November.

Jen Mangrum is the Democratic nominee for state superintendent. Five candidates sought the Democratic nomination. Mangrum narrowly overcame the 30% threshold for a run-off. Mangrum, who has the backing of the N.C. Association of Educators, will face Catherine Truitt, the Republican nominee. Truitt, the chancellor of Western Governors University N.C., defeated Rep. Craig Horn, R-Union, getting around 56% of the vote.

The Democratic nomination for N.C. treasurer was one of Tuesday's closest races. Ronnie Chatterji and Dimple Ajmera spent most of the night neck-and-neck. But when Wake County's results came in around 10:30 p.m., Chatterji took the lead. His 26,000-vote win in Wake County was more than his 20,000 vote margin statewide. Chatterji will face the current treasurer, Dale Folwell.

The Democratic primary for lieutenant governor will likely go into a runoff with Rep. Yvonne Lewis Holley of Wake County facing Sen. Terry Van Duyn of Buncombe County. Holley got 26% of the vote while Van Duyn picked up around 21%.

Mark Robinson won about 32% of the vote in a crowded Republican primary race for lieutenant governor. In a distant second was Sen. Andy Wells, R-Catawba, with around 14% of the vote. State Superintendent Mark Johnson took about 12% of the vote.

State Auditor Beth Wood defeated her Democratic challenger, Luis Toledo with a little more than 77% of the vote. Wood will go on to face Anthony Wayne Street. The News & Observer published a story Feb. 28 about how Street was put on unsupervised probation for stalking, although he wasn't convicted.

Jim O'Neill won the Republican primary for attorney general and will go on to face incumbent Josh Stein, a Democrat. O'Neill earned nearly 47% of the vote.

E.C. Sykes beat Chad Brown for the Republican nomination for Secretary of State. Sykes will take on Incumbent Elaine Marshall in November.

Jenna Wadsworth earned 54% of the vote for the Democratic nomination to lead the department of agriculture. Wadsworth became the youngest woman ever elected to public office in North Carolina when, as a 21-year-old, she was elected to Wake County Soil and Water Conservation District Board of Supervisors.

Wadsworth will face incumbent Steve Troxler, a Republican. Troxler has served four terms as the head of the agriculture department.

Rep. Josh Dobson, R-McDowell, beat Chuck Stanley by a slight margin for the Republican nomination for N.C. commissioner of labor. Incumbent Cherie Berry, known as the "elevator lady" because her photo is in every certified elevator in the state, decided not to run for re-election.

Dobson will face Jessica Holmes, who faced no opposition for the Democratic nomination.

Mike Causey, the current commissioner of insurance, earned 64.5% of the vote, defeating his Republican primary challenger, Ronald Pierce. Causey has been a central figure in an ongoing bribery case involving Greg Lindberg, a N.C. insurance tycoon and major political donor.

Causey will face an familiar opponent, Wayne Goodwin, the chair of the N.C. Democratic Party. Causey replaced Goodwin as N.C. commissioner of insurance in 2016 in a close race. Goodwin defeated Causey in 2012.

Floyd served six terms in the N.C. House. Notably, he was one of just 11 Democrats to vote in favor of House Bill 2, the controversial "bathroom bill" that required people to use public restrooms according to the gender assigned by their birth certificates.

Floyd's district, House 43, was subject to a redraw after a three-judge Superior Court panel in 2019 directed the legislature to sketch new voter maps in the legislative redistricting lawsuit Common Cause v. Lewis.

"Rep. Floyd was a major proponent of the court-ordered redistricting that forced a major redraw of his district," tweeted Brent Woodcox, a lawyer for the General Assembly. "Now looks like the incumbent will lose his seat in a new district. Careful what you wish for is right."

Another incumbent, Sen. Eddie Gallimore, R-Davidson, was beaten by challenger Rep. Steve Jarvis, R-Davidson. Jarvis gave up his seat in the House to take on Gallimore in the primary for Senate District 29. With all precincts reporting, Jarvis led Gallimore by almost nine points.