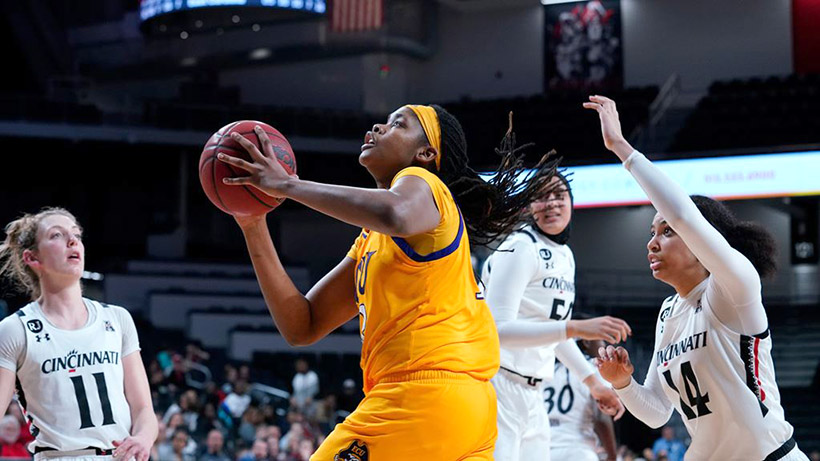 CINCINNATI, OHIO     In the final game of the regular-season, the ECU women's basketball team lost 76-53 at Cincinnati on Monday evening in Fifth Third Arena.

"Not the outcome or the effort that we had anticipated coming up here to Cincinnati," said head coach Kim McNeill. "But that's a really good team we went against tonight. All in all, the month of February was good to us. We got better. The team, the players got better. Now we have to look at it as a whole new season and get ready to go at the tournament on Friday and try to get a win."

ECU (9-20, 6-10) was led in scoring by Taniyah Thompson, who finished with 15 points. Lashonda Monk had 10 points for the Pirates to go with eight assists and four steals. Tiara Chambers had her best game in a Pirate uniform, finishing just short of a double-double with a career-high 14 points and nine rebounds.

Cincinnati (19-9, 11-5 AAC) had a pair finish with at least 20 points. Sam Rodgers had 23 points, shooting 7-of-9 from the field and 4-of-6 from three and added 10 rebounds and eight assists. Antoinette Miller was right behind her with 22 points while Angela Rizor finished with 10.

In the opening half, the Bearcats took advantage of points off turnovers and three-pointers to build a big lead against the Pirates. In the first quarter, Cincinnati shot a blistering 10-of-13 (.769) from the floor, including 4-of-6 (.667) from three. In comparison, ECU started 2-of-3, but missed nine of its next 12 shots to help allow Cincinnati take a 25-12 lead after the first quarter.

In the second stanza, ECU could not take advantage of opportunities while Cincinnati did. The Pirates forced nine Cincinnati turnovers in the opening 20 minutes, with six of those being steals. But ECU scored just two points off turnovers. On the other end, 10 ECU miscues led to 12 Bearcat points. A 10-0 Cincinnati run to open the quarter put ECU in a 35-12 hole and the Pirates trailed 38-17 at the half.

Thompson had the hot hand in the early part of the third quarter, scoring seven points before the midway point. But after she hit a jumper at the 6:25 mark, ECU scored just one more point in the frame, allowing Cincinnati to extend its lead to 60-27.

ECU was the aggressor in the fourth quarter, as the Pirates had their best offensive output of the game. ECU outscored Cincinnati 26-16 in the final 10 minutes, mainly thanks to Monk and Chambers. Chambers had nine points in the fourth quarter, equaling her previous career-high just in the frame. Monk added eight points of her own. However, the Pirates never truly threatened the Cincinnati lead, getting no closer than 23 points.

ECU will next head to Uncasville, Conn., for the AAC Conference Championship. The Pirates will be the No. 9 seed and will take on No. 8 seed Temple at 2 p.m., on Friday afternoon in the Mohegan Sun Arena.