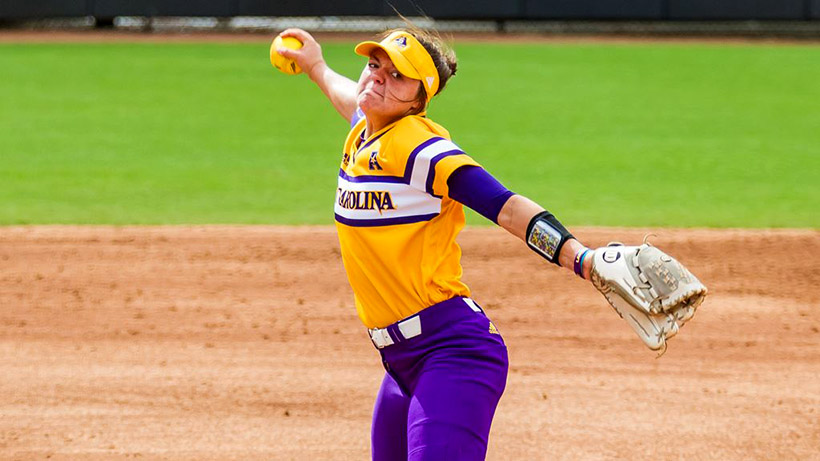 LYNCHBURG, Va.     East Carolina defeated Hofstra, 5-1, and fell to tournament host Liberty in a tight 3-2 contest to wrap up play at the Liberty Spring Classic Sunday afternoon at the Liberty Softball Stadium. The Pirates finished the weekend with three wins and two losses.

Game One     East Carolina (11-7) got off to a roaring start against Hofstra (2-11) as Olivia Narron singled to lead off the contest before Ashleigh Inae laced a double into the gap in right center to plate Narron and put the Pirates ahead 1-0. Garner then singled through the right side with one out, allowing Inae to score easily from third base. A double play ended the half inning later on, but the early damage was done.

The Pride cut the ECU lead in half in the bottom of the second. Jaycee Ruberti drew a four-pitch leadoff walk before scoring on a double off the bat of Lindsey Hay. Hofstra threatened to net the tying run, but Narron made a nice throw to the plate and Abigail Umphlett tagged Hay out to end the frame.

East Carolina extended its advantage to three in the top of the fourth inning. Rachel McCollum singled through the left side to lead things off before Garner ripped a double into right center. Tate McClellan then worked a full-count walk to load the bases with no outs. Following a double play, Bailey Ledvina assured that the Pirates would get something out of the situation with a two-run single to right field that made the score 4-1.

A trio of consecutive singles by McClellan, Logyn Estes and Ledvina put ECU on top 5-1 in the top of the sixth and that's the way the game would end as Hofstra was unable to come up with a base hit in the final three frames.

Ledvina posted two hits and three RBI to pace the Pirate offense while Narron and Garner chipped in with a pair of base knocks each. Hay contributed a double and an RBI as East Carolina out-hit the Pride 10-3.

Game Two     Estes provided the first hit of the game for either side in the top of the second with a two-out double, but a strikeout stranded her on base.

Liberty (6-11) menaced in the bottom of the second, loading the bases with two outs after a walk and a pair of infield singles, but Estes responded with a looking strikeout to terminate the threat.

The Flames broke onto the board in the bottom of the third via a two-out, two-run double off the bat of Autumn Bishop. Liberty then made it 3-0 a batter later with an Emily Sweat RBI single before a grounder back to the circle ended the frame.

ECU drew within a run in the top of the fourth. After McCollum doubled to right field with one out, Garner got a hold of a 2-2 offering and drilled it over the wall in right field for her fourth home run of the season.

The teams were unable to dent the scoreboard the rest of the way as Liberty secured the one-run victory.

Estes finished the contest 2-for-3 with a pair of doubles while Garner drove in both of the Pirate runs with her fourth-inning long ball. Bishop recorded a hit and two RBI to lead the home side.

Up Next: East Carolina returns to action next weekend at the Fresno State Bulldog Classic.