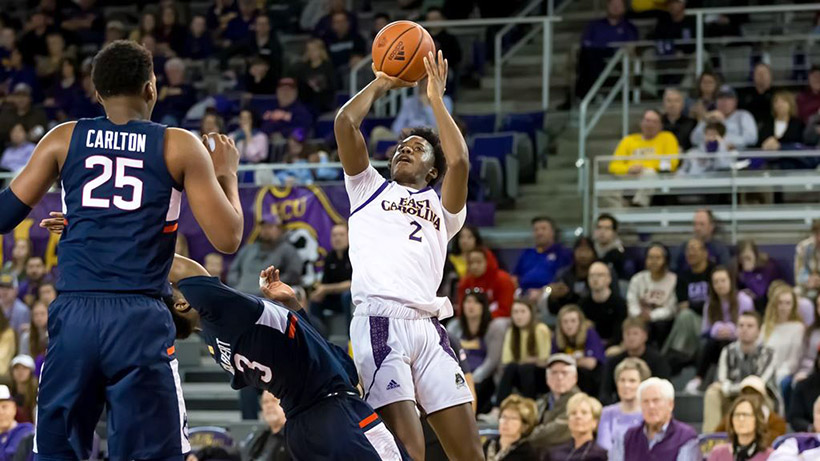 GREENVILLE, N.C.     UConn closed the first half on a 12-4 run and dealt East Carolina an 84-63 loss in the Pirates' home finale Saturday inside Williams Arena at Minges Coliseum.

UConn's Christian Vital led all scorers with a season-high 27, while freshman James Bouknight posted a double-double with 19 points and 10 rebounds for the Huskies (17-12, 8-8 The American). Isaiah Whaley added 16 points and seven rebounds and Brendan Adams scored 11 off the bench.

Although UConn maintained a double-digit lead the majority of the second half, ECU made a run midway through the stanza, going on a 16-8 run to pull within six, 62-56, with 9:50 to play. However, the Huskies were not phased and pushed their lead out to 17 points with 4:16 remaining, outscoring the Pirates 14-3 over a five-minute stretch.

"I'm disappointed in a number of things," ECU Head Coach Joe Dooley said. "It was probably the first time in a while we've given in a little bit. We had a number of things go wrong today and we couldn't offset it. We didn't play like ourselves today. A lot of that is attributed to UConn. They made a lot timely shots and obviously Vital was terrific.

Freshman Tristen Newton scored a season-high 25 points for the Pirates while fellow freshman Charles Coleman reached double figures for the first time this season with 12 points.

Both teams shot 43 percent from the field, but UConn made 10 3s compared to two by the Pirates. The Huskies were also plus-12 on the backboards and scored 19 second chance points off 16 offensive rebounds.

Sophomore Jayden Gardner failed to score double figures for the first time this season as the UConn defense limited him to just nine points.

ECU junior guard JJ Miles was ejected from the game after his was assessed a technical foul after slapping the ball out of the hands of UConn guard Alterique Gilbert.