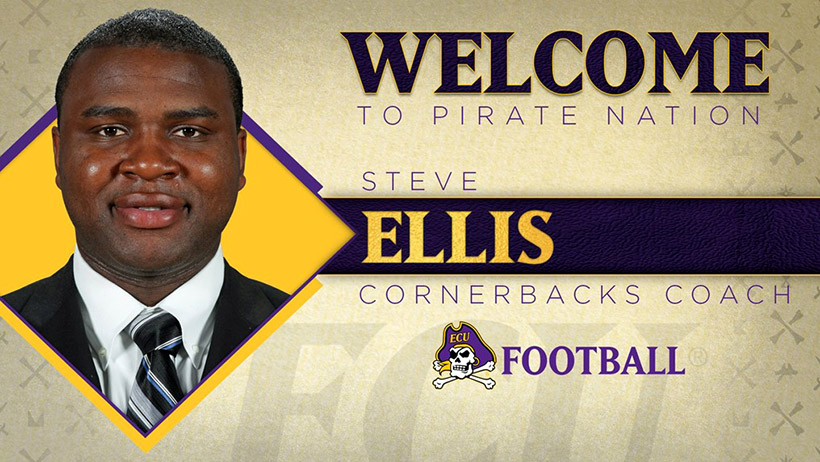 GREENVILLE, N.C.     Steve Ellis has been named cornerbacks coach at East Carolina University according to an announcement from head football coach Mike Houston.

"We are excited to have someone with Steve's credentials and energy level in our program," Houston said. "While familiarity with our conference is certainly an added plus, his career experiences have been synonymous with development and success, and we are looking forward to the impact he will have on our young men."

Ellis was part of seven bowl appearances during his 10 years at MTSU while serving as cornerbacks coach (2009-2018), defensive coordinator (2011-14) and recruiting coordinator (2015-2018). He directly mentored five Blue Raiders who earned all-conference honors, including Marcus Udell and Alex Suber who, respectively, led the league in interceptions and accounted for 12 pass breakups in 2009.

As defensive coordinator, he orchestrated an impressive turnaround as Middle Tennessee improved 48 spots in the national rankings in scoring defense, 29 in rush defense and 10 in total defense in 2012. A year later, the Blue Raiders stood fifth at the FBS level in turnovers gained and 17th in red zone defense. Ellis' last four years in Murfreesboro resulted in successive postseason showings at the Bahama Bowl (2015), Hawai'i Bowl (2016), Camellia Bowl (2017) and New Orleans Bowl (2018), the latter following a Conference USA East Division title and league championship game appearance.

Ellis began his coaching career in 2003 at Nicholls State, first working with the safeties before assuming duties as linebackers coach (2004-05) and defensive coordinator (2006-08). After capturing the 2005 Southland Conference title, the 2006 Colonels ranked 19th nationally in total defense and his 2007 unit topped the league in interceptions, total and pass defense.

Ellis was also a two-time participant in the NFL Coaches Fellowship Program, learning from Pittsburgh Steelers Head Coach Mike Tomlin and legendary defensive coordinator Dick LeBeau in 2008 before enjoying a similar experience with the Buffalo Bills in 2010.

He was a three-year starter, a three-year all-conference standout and team captain as a defensive back at NSU, wrapping up a playing career in 2002 with over 200 tackles and five interceptions before earning a bachelor's degree in education in 2003.

Ellis, 40, and his wife Regina are the parents of three children - Caleb, Aubrey Grace and Ava Rose.