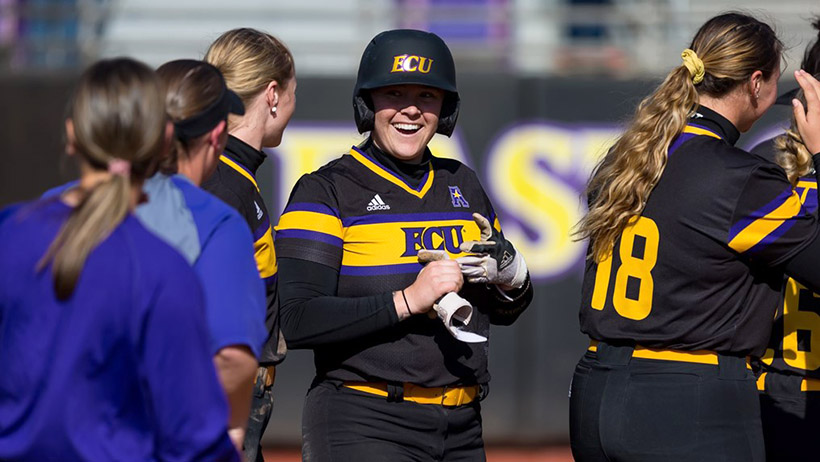 GREENVILLE, N.C.     East Carolina hits the road for the second time this season when it heads to Lynchburg, Va., for the Liberty Spring Classic. The Pirates will take on Butler, Fairfield, Hofstra, Yale and the host Flames during the three-day event.

ECU (8-5 overall) furnished a 3-0 record at home last weekend during the Pirate Invitational, defeating Massachusetts 7-3, Pittsburgh 9-1 in five innings and Towson 6-5 in eight innings on the strength of back-to-back home runs in the extra frame.

Junior infielder Ashleigh Inae paces the offense with an impressive slash of .412/.545/.529. Meanwhile, redshirt senior utility Rachel McCollum leads the squad in runs scored (13), home runs (4) and total bases (28). The Pirates excelled at the plate last weekend, hitting .368 as a team with six doubles, a triple and six home runs. Freshman Logyn Estes was fantastic on both ends of the spectrum, hitting .444 with a 1.733 OPS, two doubles, two home runs, seven RBI and 12 total bases while also going 2-0 with a 1.05 earned run average in the circle.

Speaking of pitching, Estes checks in with a 5-0 record, 1.58 ERA and 16 strikeouts in 26.2 innings of work while junior RHP Erin Poepping leads the staff with a 1.37 ERA and 13 strikeouts against just one walk in 15.1 frames.

Scouting Butler     Butler has gotten off to a nice start to its season, compiling an 8-3 record through 11 contests. The Bulldogs went 4-2 at the Madeira Beach Games last weekend, defeating Central Arkansas, Nicholls State, Georgia State and Middle Tennessee while also falling to Akron and Presbyterian. Lauren Fey leads the offensive efforts with a .457 batting average (16-for-35) to go along with Loren Simpson's .357 batting average, four doubles and 11 RBI. In the circle, Karli Ricketts has tossed a squad-high 33.1 innings with a 3-2 record, 2.10 ERA and 45 strikeouts. As a team, Butler is batting .239 with nine doubles, four triples and seven home runs while the pitching staff has put together a collective 2.37 ERA with 84 strikeouts in 79.2 innings of work. Scott Hall is in his 10th season as head coach of the Bulldog program.

The Butler Series     East Carolina and Butler have never met on the softball diamond. The Pirates did take on the Bulldogs' fellow Big East Conference member DePaul a couple of weeks ago in Greenville as ECU fell twice to the league favorite Blue Demons at the Pirate Clash.

About Liberty     Liberty enters the weekend with a 3-11 overall record but has taken on a gauntlet of a schedule that has included nine ranked teams. The Flames were 2-2 at the Gamecock Invitational at the University of South Carolina last weekend, dropping decisions to Boston College and then No. 6 Michigan while also knocking off Elon and the same nationally-ranked Wolverine side. Kara Canetto and Amber Bishop are batting .357 and .356 respectively with Bishop having driven in a team-best nine runs. Karlie Keeney paces the pitching staff in innings pitched (51.0), sporting a 2-4 overall record with a 3.43 ERA and 30 strikeouts against 16 walks. As a team, Liberty is batting .231 while the pitching unit owns a 5.25 ERA with 45 strikeouts in 89.1 innings. Dot Richardson is in her seventh season as the program's head coach.

The Liberty Series     East Carolina holds a 36-4 advantage in the all-time series with Liberty. The teams last met during the 2013 campaign when they split a pair of games in Greenville.

Examining Fairfield     Fairfield began its season at the UNC Greensboro Invitational last weekend, defeating North Carolina while falling to the host Spartans and Purdue (twice) to emerge with a 1-3 record. Sam Merino led the charge at the plate, going 8-for-14 (.571) with nine total bases and five stolen bases. Mikayla Rubin also enjoyed a solid debut weekend, boasting a .364 batting average (4-for-11) with three RBI. The Stags hit .325 as a team during the tournament but surrendered 30 runs to end up with a 9.95 staff earned run average. Katie Kudlacik tossed a team-high 11 innings, compiling a 1-1 record and 4.09 ERA with eight strikeouts and six walks. Julie Brzezinski is in her 23rd season as the head coach at Fairfield.

The Fairfield Series     East Carolina is 11-2 against Fairfield in the all-time series. The Pirates defeated the Stags in the teams' last encounter - a 5-4 victory at the Diamond 9 Citrus Classic in Orlando, Fla., back on Feb. 23, 2014.

The Book On Yale     Yale began the 2020 season last weekend in California at the Silicon Valley Classic. Playing games in Santa Clara and San Jose, the Bulldogs picked up wins over Santa Clara and California Baptist while falling to Canisius, Colorado State and San Jose State. Sydney Grobman has been the top offensive performer for Yale thus far, building a .412 batting average (7-for-17) through five games played. Annie Tarte also checks in with a .375 batting average. Collectively, the Bulldogs are hitting .222 with four doubles and a triple while the pitching staff has put together a 2.80 ERA with 25 strikeouts in 35 innings. Nic Conway boasts a 1.17 ERA and 13 strikeouts against one walk in 12 innings of work. Jen Goodwin is in her eighth season as head coach at Yale.

The Yale Series     East Carolina holds a 2-1 advantage in the series with Yale. The Pirates knocked off the Bulldogs by a 7-2 margin at the Diamond 9 Citrus Classic in Kissimmee, Fla., in the teams' last meeting back on Feb. 27, 2016.

A Look at Hofstra     Hofstra has furnished a 2-6 overall record thus far in 2020. Last weekend, the Pride attended the FAU Strikeout Cancer Tournament, defeating host Florida Atlantic while falling to Illinois State and North Florida. Madison McKevitt leads the team with a .333 batting average while Kasey Collins is hitting .304 with a squad-best seven hits. Lindsey Hay has also contributed a team-high five RBI for a squad that is batting .220 with four doubles and a home run. Madison Burns (1-3, 4.32 ERA) and Nikki Mullin (1-2, 5.62 ERA) have done a bulk of the work inside the circle, combining for 16 strikeouts in 41 of Hofstra's 47 innings. Jay Miller is in his second in charge of the Pride program. He owns stints as head coach at Mississippi State and Missouri and has served on the USA Softball National Team staff.

The Hofstra Series     East Carolina owns a 4-2 record against Hofstra in the all-time series. The squads most recently faced off at the Felsberg Invitational in Miami, Fla., back on Feb. 10, 2018 when the Pride recorded a 4-0 victory over the Pirates.

Up Next     East Carolina embarks on its furthest road trip of the campaign next weekend when the Pirates travel to Fresno, Calif., for the Bulldog Classic on the campus of Fresno State University.