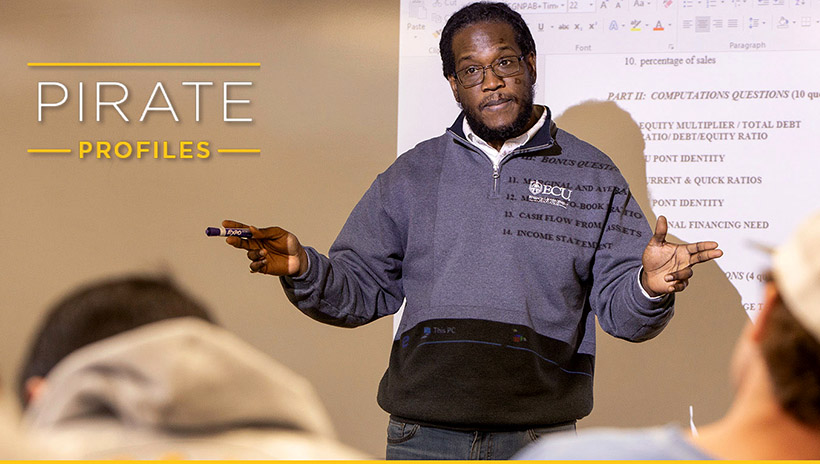 Dr. Oneil Harris, associate professor in the Department of Finance at East Carolina University, had one word to describe his youth growing up in Kingston, Jamaica - "interesting."

However, that "interesting" life that included growing up in a single-parent household after his father left when Harris was 4 years old shaped the man and professor he is today.

"Growing up without a dad, I wasn't really into sports. I was more of a troublemaker as a child," Harris said. "At age 17, I got my first child, and at age 19, I had my second and I had to really sit down and think about what I wanted to do with my life, and so I decided at that point to become an academic and go to college."

Harris left Jamaica for Florida Atlantic University and knew exactly what he wanted to study.

"My interest in economics started in high school in Jamaica," he said. "Where I grew up in Jamaica was kind of rough, so I always wanted to understand how the economy worked. To make my life better for me and my kids, I had to understand money."

He obtained his bachelor's and master's degrees in economics and then went to get his doctoral degree. 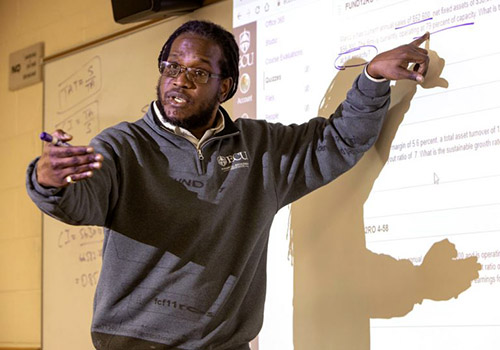 Dr. Oneil Harris grew up in Jamaica, which he said sparked an early interest in economics.
"I had hoped to do my Ph.D. in economics, but I met a finance professor who encouraged me to study finance instead," Harris said. "I was a little bit hesitant because I had never taken a finance course, but once I started the program I realized that finance is applied economics, and so it was something that naturally spoke to me."

Harris has been teaching at ECU for 11 years.

"I'm known in the finance department to be one of the toughest professors. That speaks to me. It's appealing to me," he said. "My students know that I have a vested interest in their success."

That interest is displayed in an annual trip the students take to the New York Stock Exchange.

"That's something I look forward to every year," Harris said. "It's a way for them to get a real-world sense of what we talk about in class every day and see it applied."

Harris said the world of business and finance changes often, generating questions from his students. 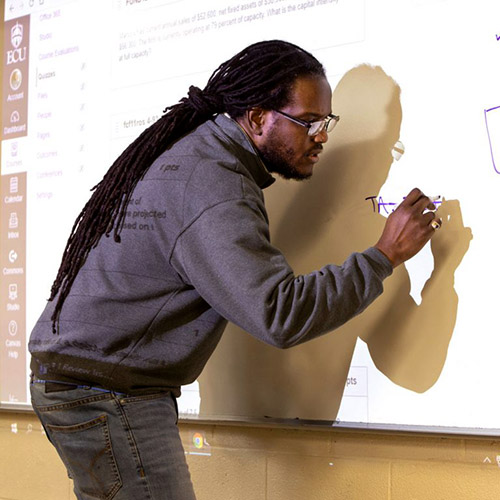 "I wouldn't say that I have a particular area for research," he said. "It's just whatever I find interesting."

He's looked at everything from corporate social responsibility to CEO compensation. One research project he was involved in focused on the differences between male and female managers.

"For that paper, we basically showed that at some point, gender doesn't matter," Harris said. "In gender-related research, they seemed to argue that female managers think differently than their male counterparts, that they are more risk averse. Our study shows that once you throw money in the mix, that difference goes away."

As a professor in finance, Harris said some people approach him with questions about specific stocks.

"I get asked, but I don't offer advice," he said. "That's because to me, money matters are personal. Everyone needs to be involved in their own money management."

He said those who save their money have time on their side, as that money will compound to produce more - which isn't exactly a bad thing in what he called the unpredictable world of business, economics and finance.

"In the profession, they always have a caveat statement that everything is subject to risk, so for me it's best not to give advice," he said, adding with a smile, "I tend to keep friends that way."

What I love about ECU: "As it relates to College of Business, I enjoy my colleagues. We have a culture here that is open and encourages us to try new things, so the people that I work with would be No. 1 on the top of my list."

Research interests: "My research interests are varied because of my background. Starting in economics, I have ideas in economics I like to pursue, but marrying that with finance, I tend to do research on the overall economy or research on firms. I'm known around here for doing research. Other faculty approach me with ideas, and if we can formulate something from it then that's a research project I'm working on."