ECU Puts Winning Streak on the Line at USF 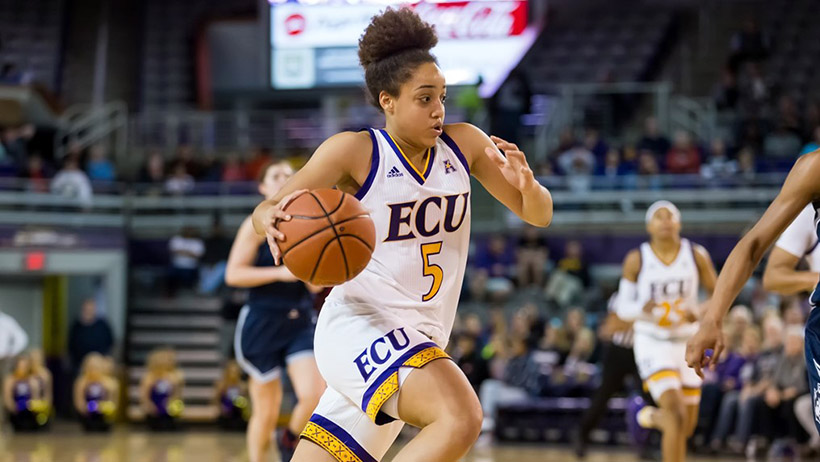 ECU (8-18, 5-8 AAC) is coming off its best win of the season. The Pirates trailed Temple by 17 points in the first quarter and were still trailing by seven heading into the fourth quarter, but came back to win 56-50. It was the largest comeback win of the season for ECU and the first time the Pirates have won when trailing after three quarters. Lashonda Monk continues to lead ECU in scoring (14.3 ppg) and the AAC in steals (4.0 spg) and hit a couple of historical benchmarks in her past two games. With nine steals against Tulsa, Monk broke Toina Coley's ECU career record for steals and she now needs 12 to tie UConn's Gabby Williams' AAC record. Monk also scored 17 points against Temple, making her the 23rd ECU player to score 1,000 points in her career. Taniyah Thompson has caught fire during ECU's 5-2 stretch. She is averaging 13.8 points overall and is up to 19.1 in that seven-game stretch, including 20 points four times. Dominique Claytor is also stepping up for ECU. She leads the team in rebounding, averaging 6.0 boards and has two straight double-doubles. ECU is 6-1 this season when Claytor scores in double-figures. As a team, the Pirates are on pace to break the school record in steals, as they have 353 and the record is 388 set in 2011-12.

South Florida (16-11, 8-5 AAC) beat Memphis 68-47 on Saturday to snap a two-game losing streak. The Bulls are a different team at home versus away from friendly confines, as USF is 12-2 in the Yuengling Center. South Florida excels defensively, as they are second in the league in scoring defense, allowing 56.4 points and in field goal percentage defense, letting teams shoot .348 from the floor. They are also the best rebounding team in the conference, outrebounding opponents by nearly 10 boards per game which ranks eighth in the country. Elena Tsineke, twin sister of ECU's Katerina Tsineke, leads the Bulls in scoring (12.0 ppg) and is one of six players averaging at least 7.5 points. Bethy Mununga is second in the AAC in rebounding, grabbing 9.7 rebounds and her 4.1 offensive rebounds per game is 20th in the country. ECU will look to turn USF over, as the Bulls rank 276th in the country in turnovers, giving the ball away 17.4 times per game.

South Florida has a 9-6 edge in the all-time series and has had ECU's number since the two schools moved to the AAC. Since the 2014-15 season, ECU is 1-8 against the Bulls and has lost seven straight against them. Last year, the two teams met in Greenville and South Florida took a 63-50 win. In the Yuengling Center, ECU is 3-5, but has not won there since 2009. It will also be the first collegiate meeting between the Tsineke's.

Tipoff is scheduled for 7 p.m., on Tuesday night in the Yuengling Center. The game will be streamed on the American Digital Network and fans can also follow the live stats HERE.