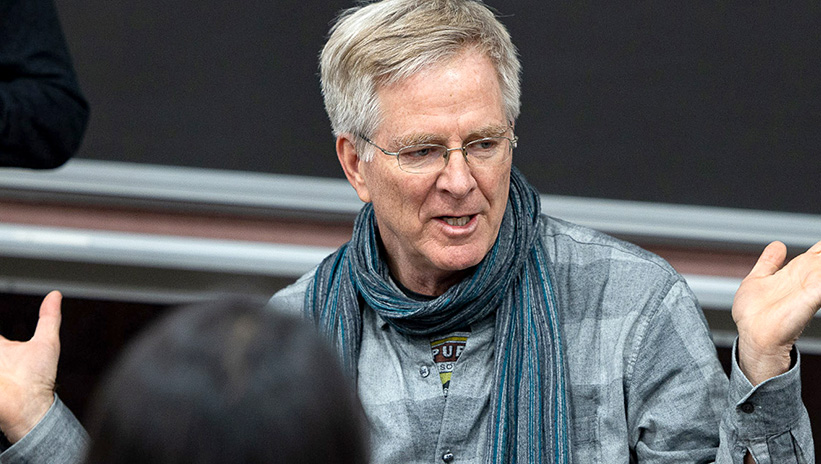 Hundreds of people braved snowy weather Thursday night to hear expert Rick Steves' talk about a lifetime of travel - about 120 days every year - with a 9-by-22-by-14-inch carry-on suitcase.

At East Carolina University as part of the Voyages of Discovery Series, the American travel writer, TV personality and activist met with students in the afternoon before his public talk, "Travel as a Political Act," in the Main Campus Student Center ballrooms.

During the event, Charlie '55, '57 and Nancy Bedford of Atlanta were honored for establishing an endowment in the Thomas Harriot College of Arts and Sciences for students to study abroad. (See accompanying story). 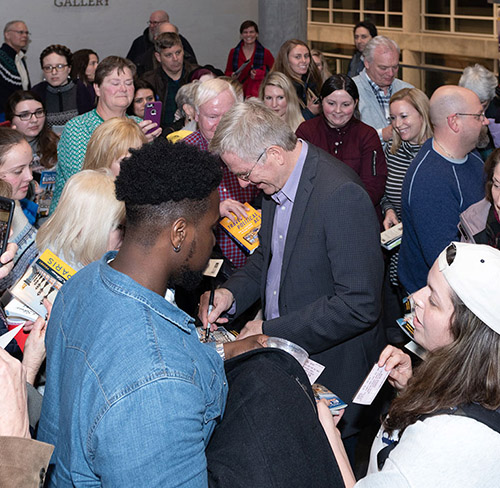 Rick Steves signs autographs following his talk at the Main Campus Student Center. | Photo: Rob Taylor
Steves said he was inspired by the ECU students he met broadening their perspective through foreign study, although he didn't know about the university before his visit.

"ECU to me didn't mean East Carolina University. In TV terms ECU means 'extremely close up,'" Steves said. "When you're able to send students from this university abroad they're getting an ECU look, I think, at this beautiful world, and that's a beautiful thing. And I'm going to remember what ECU is now in that regard."

An authority on European travel, Steves has written more than 50 country, city and regional guidebooks. He employs 150 people in the Seattle-based business he founded in 1976, and he operates a successful tour program, weekly public radio program and TV show. Steves also works with advocacy groups focusing on economic and social justice, drug policy reform and ending hunger.

His talk featured anecdotes and images ranging from drinking limoncello with a priest on his Italian patio to his first visit to the glass-domed top of Germany's capital building - a powerful architectural symbol that provides a direct view into politicians' offices. The dome offers a 360-degree panoramic view of Berlin while symbolizing a new republic.

"History becomes real when you travel," he said. "Go to Europe with an appetite for context. If you know a little bit about something you're looking at, you've doubled your experience."

He said travel is transformational because it provides a close-up view of other cultures and history, and helps people broaden their perspectives. "I love that we meet people who see things differently than we do," he said. "Getting to know people - that's what carbonates your experiences. If I'm not connecting with people then I'm not doing a good job."

Steves said his real mission is as a travel teacher. "The purpose of a travel writer is to equip and inspire people to get out of their comfort zones, and to get to know the other 96% of humanity," he said.

Steves spends a third of his time doing research for his guidebooks. Another third is spent filming his TV show for public television; it takes six days in Europe to film one 30-minute segment. The remaining time is spent helping with his tours. 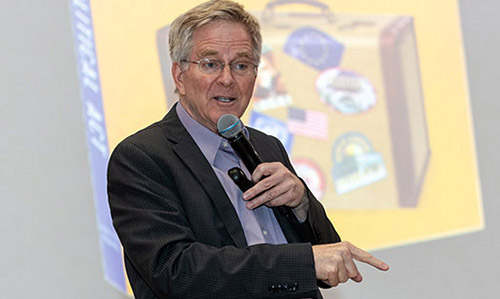 Rick Steves speaks to hundreds of people at the Voyages of Discovery Series lecture. | Photo: Rob Taylor
His latest project, "Hunger and Hope: Lessons Learned from Ethiopia and Guatemala," will soon debut on public television and focuses on ending hunger and poverty. Development aid is a smart investment because it creates independence, Steves said, for 10% of the world's population that lives on less than $2 a day. For the cost of one set of braces, a well could be built to provide a safe drinking source in village, he said.

Earlier in the afternoon, a group of about 30 students from the Honors College and international studies had an opportunity to meet and ask Steves questions.

EC Scholar Naimi Pothiwala of Apex grew up watching Steves on public television. "Me and my dad, we're big fans," she said. "Growing up, I always watched him. He was a big part of our weekends."

Pothiwala, a sophomore majoring in public health studies with a minor in Hispanic studies, plans to study in Spain next spring and travel across Europe. She said meeting Steves at this time in her life was special. "He really influenced me growing up in wanting to be interested in other cultures," she said.

Steves' lectures and shows can be viewed free on his website at www.ricksteves.com.

Established in 2007, the Voyages of Discovery Series advances the spirit of exploration and discovery that is the hallmark of the arts and sciences. Each year, the series features thought-provoking and accomplished leaders from a variety of disciplines who provide insight into important issues in today's society, and who share their experiences and perspectives.

The final lecture for the 2019-20 season will feature Libby Riddles, the Iditarod dog sled race's first woman champion, on March 26.