Login to Send a Private Message to Daniel Bunting
Publisher's note: This post appears here courtesy of the news and information section for East Carolina University men's and women's sports. 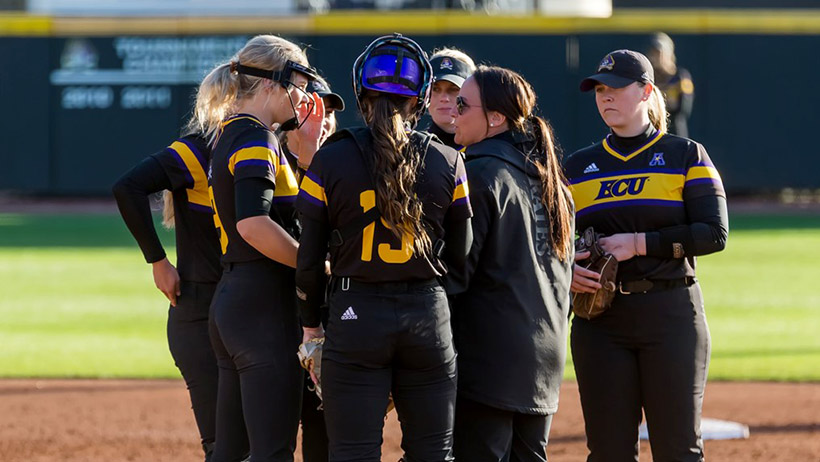 GREENVILLE, N.C.     East Carolina closes its 10-game homestand this weekend by welcoming Massachusetts, Pittsburgh and Towson to the ECU Softball Stadium for the 2020 Pirate Invitational.

With inclement weather in Friday's forecast, the event has been reduced to six games as Towson and Massachusetts will open the tournament Saturday at 11 a.m. ECU will play twice Saturday and twice Sunday.

The Pirates went 3-2 last weekend at the Pirate Clash in Greenville, defeating Hampton and George Washington (twice) while falling to DePaul two times. East Carolina enters the weekend with a 5-5 overall record.

Junior infielder Ashleigh Inae leads the Pirate offensive efforts with a .440 batting average, 11 hits (three doubles) and seven walks while senior outfielder Olivia Narron has recorded a hit in every game this season (12 total) and sports a .364 batting average as well as a 10-game hitting streak. New to the program this year, junior infielder Chandley Garner paces the squad with seven RBI while also batting .323 with 10 hits, three doubles and a home run to her credit.

In the circle, junior RHP Erin Poepping holds a team-best 1.37 earned run average with 13 strikeouts against one walk in 15.1 innings of work. Freshman RHP Logyn Estes is off to a great start to her collegiate career, sporting a 3-0 record and 1.75 ERA with 12 strikeouts in 20 innings as well as a .219 batting average against.

Scouting Massachusetts     Massachusetts began its 2020 campaign last weekend at the USC Upstate Classic. The Minutewomen split four games, defeating Buffalo 6-2 and Maryland-Eastern Shore 11-0 (five innings) before falling to the host Spartans 1-0 and Oakland 5-2. Junior Caroline Videtto was named the Atlantic 10 Player of the Week after hitting .583 (7-for-12) with two doubles, a grand slam and eight RBI. Classmate Hannah Bunker also had a productive weekend at the plate, going 5-for-10 (.500) with two runs scored. In the circle, junior Kiara Oliver posted a 0.62 earned run average in 11.1 innings with 14 strikeouts against three walks. She held opposing hitters to a .158 batting average, surrendering just one earned run. Massachusetts is coached by Kristi Stefanoni who is in her seventh season in charge of the program.

The Massachusetts Series     East Carolina is 1-2 against Massachusetts. The Minutewomen downed the Pirates 5-0 back on March 2, 2019 in Greenville as part of the Purple-Gold Invitational.

About Pittsburgh     Pittsburgh arrives in Greenville with a 4-5 overall record. The Panthers took part in the ACC/Big Ten Challenge last weekend, splitting a pair of games each with Michigan State and Maryland. Early in the season, sophomore Katlyn Pavlick leads Pittsburgh with a .370 batting average and paces the unit with 10 hits, eight runs scored, two home runs and seven RBI. Junior LoLo Sanchez is another top offensive option for the Panthers, checking in with a .346 batting average (9-for-26), six runs scored and four RBI. In terms of pitching, redshirt junior Brittany Knight has done the bulk of the work, tossing 34.1 innings with a 4-2 record and 3.06 ERA. She has struck out 32 batters and walked 13. Jodi Hermanek is in her second season as Pittsburgh's head coach after a highly-successful 10-year stint at Ohio University.

The Pittsburgh Series     East Carolina holds a 3-1 advantage in the all-time series with Pittsburgh. The two teams last met during the 2017 season in Greenville and split a pair of games. The Panthers won the first contest 5-2 before the Pirates responded with an 8-3 victory.

Examining Towson     Towson is off to a 4-3 start this season after winning three of five at the Winthrop Tournament last weekend. The Tigers knocked off Holy Cross 7-0, UNC Greensboro 7-0 and Winthrop 11-7 while also dropping 5-4 and 7-2 decisions to Boston University and Eastern Kentucky, respectively. Julia Smith-Harrington has done it all for Towson thus far, leading the team with a .500 (11-for-22) batting average while also posting a 2-0 record, 0.00 ERA and 10 strikeouts in 14 innings of work as the squad's top pitcher. Jessica Swistock has also excelled at the plate, batting .400 (8-for-20) with four runs scored, three doubles and six RBI. Sara Johnson has also seen a good amount of work in the circle, compiling a 1-2 record, 4.12 ERA and 20 strikeouts in 18.2 innings. Lisa Costello is in her 25th season as head coach of the Tiger program.

The Towson Series     East Carolina is 17-1 against Towson, including a 14-1 mark in home games. The Pirates and Tigers last encountered one another last season (Feb. 9, 2019) at the USC Upstate Spartan Classic in Spartanburg, S.C., where ECU came away with a 14-5 victory in five innings.

Streak Speak     Narron's current career-best 10-game hitting streak is the longest for an East Carolina player since Tyler King put together a 16-game stretch in 2019.

Up Next     ECU heads to Lynchburg, Va., for the Liberty Softball Classic Feb. 28-March 1. The Pirates will take on Butler, Liberty, Fairfield, Penn and Yale during the three-day event.