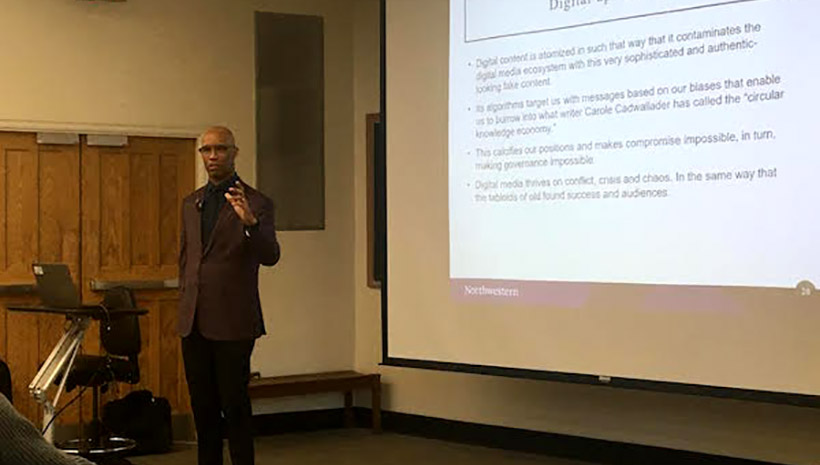 The digital revolution has slashed profits for companies in the business of journalism, leaving the industry to reassess a longstanding yet faulty business model, says Charles Whitaker.

Today, a regular subscription to the magazine is $40. But it's consumers who'll determine its real value.

Whitaker spoke Monday, Feb. 17, as part of the Hayek Lecture Series at Duke University. The lecture series features prominent scholars and writers, who address issues about our economy and our society.

In early America, newspapers, for instance, catered to an elite audience who could afford a subscription. That changed in the early 19th century with Benjamin Day's "penny press," which relied more heavily on advertising than subscriptions, opening readership to the masses.

From there, journalism depended on what Whitaker calls the "exposure business model" - a three-legged stool involving publisher, consumer, and advertiser. Through this model, the consumer gets content dirt cheap, and the advertiser shoulders the bulk of the costs.

As recently as the 1990s, publications were still reporting 20% profit margins. Unlike the seeming overnight conversion from vinyl to CD, the newspaper industry adapted more slowly to the digital revolution. One reason was the "halo effect" of print advertising. Print ads feel as if they're part of the news-reading experience, and they absorb more subconscious attention. When a reader opens a website, they're more likely to feel annoyed and "x" out all the advertisements.

Another revenue stream, later decimated by Craigslist, were classified ads. Even though the cost of each ad unit was relatively small, aggregating them could produce a sizable profit.

"A publisher friend of mine said classified ads were like found money. You just raked it in," Whitaker said.

Traditional advertising couldn't compete with Google ads, which provided useful data about consumers' habits. Coupon revenue also took a hit. On Sundays and Wednesdays, typically, newspapers were chock-full of coupons, later slashed due to the rise of big-box stores and Amazon.

Today, the digital age has atomized online content and divorced it from major outlets, giving rise to myriad "news" outlets pushing their content through social media.

"This fake news looks real and it comes to us out of nowhere. Of course, we absorb it and begin to think it's real. It calcifies our positions and makes compromise impossible," Whitaker said.

Digital media thrives on public discord. Advertisers will pay publishers by the click, and more controversy equals more clicks. Still, the business model is unsustainable, he said, and digital advertisers only pay about a penny per click, relatively nothing compared to what they'd pay for a page in a magazine.

So, can the news media be saved?

Some outlets today rely on billionaire funders, such as the Washington Post, owned by Amazon founder Jeff Bezos. Others rely on foundations and nonprofits. But, Whitaker said, this third-party business model isn't a formula for success.

The modern media landscape does have advantages: lower production costs and fewer industry gatekeepers. But that changing landscape also means journalists must become more dynamic in their skills as jobs become more competitive. They have to be able to operate a camera or deliver a newscast on the spot, for example.

Increased media literacy may help, Whitaker said. Today, many people don't understand the codes of conduct by which journalists generally operate - what it means to speak "off the record," the difference between the news and editorial pages, and the fact reporters typically don't pay money for their sourcing.

Increased media literacy won't be the industry's saving grace, Whitaker said. But it's still important that people value the product and the importance of a free press.

"We need more people invested in what journalism is."