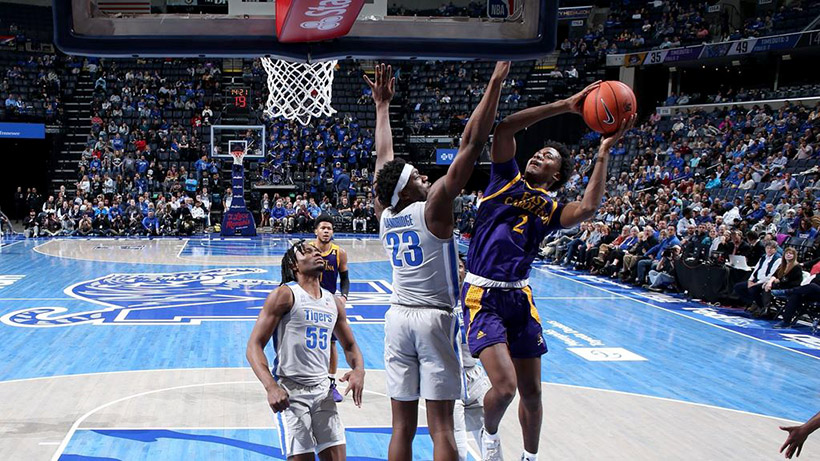 The Pirates battled back from a 16-point second-half deficit to tie the score three times, the first with 6:23 to play. But after tying the game at 69, Ellis and Achiuwa scored inside to give the Tigers a 73-69 lead going into the final minute.

ECU made one free throw and Memphis three of four for a 76-70 lead. Bitumba Baruti nailed a 3-pointer for the Pirates with 10.3 seconds to play but Ellis made it a two-possession game.

Tristen Newton tied a season high with 23 points and grabbed 13 rebounds for his first double-double for the Pirates (10-17, 4-10). Jayden Gardner added 16 points and Baruti 14.

POSTGAME QUOTES     ECU Head Coach Joe Dooley     "They say winning is a learned process and we've got to learn how to win some of these deals. I said to the guys we've had some opportunities and I think the good news is we're in the game and have opportunities, and now we need to figure some things out to make sure we win the game."

"Tristen saved us in the first half. We got off to a bad start. I thought he kept us in the game early. We were sort of teetering on the point of getting beat pretty good and the guys fought back and he did a great job of scoring some baskets for us, rebounding, getting us out in transition and getting to the paint."

"I told them I was proud of the way we could have been put away and we didn't. We also need to play a little smarter in stretches. We took a few bad shots and had some untimely turnovers but I thought for the most part they didn't look around when we were a little rattled early. Once we got our footing, we played at a high level and we tried to compete."

Freshman Tristen Newton     "It was a tough game. We were fighting the whole game, it just didn't go our way. We feel like we can compete with anybody in the league but tonight it just did not happen. The game for me is slowing down. The pressure they put on me in practice is game like so I'm really getting used to it."