For the past months, we have watched as President Donald J. Trump was impeached in the House by rabid partisan politicians, then tried in the Senate, and ultimately ACQUITTED. Donald J. Trump, impeached, Alexander Hamilton, Federalist No. 65, Electoral College, Due Process, Articles of Impeachment, Charleston, South Carolina
Home
Categories
Login 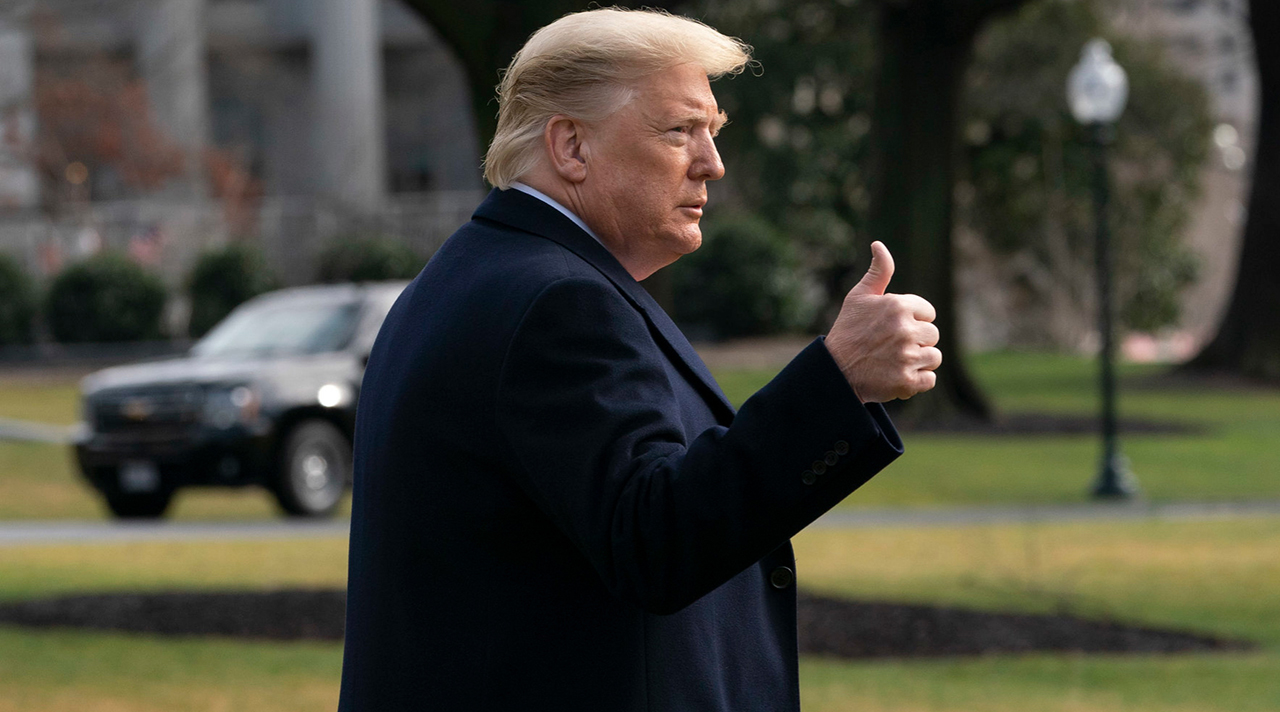 For the past months, we have watched as President Donald J. Trump was impeached in the House by rabid partisan politicians, then tried in the Senate, and ultimately ACQUITTED. We have been utterly disgusted at the depths to which Democrats were willing to go to tarnish the name of this president, to somehow remove him from office, to undue the legitimate election of 2016, and at the very least, to smear his legacy and help derail his changes at re-election in November. We will never forget how the wicked witch of the House, Nancy Pelosi, said these words at the podium "He is impeached forever."

Now we know that Trump's popularity increased steadily and impressively during the entire process of impeachment and that his campaign took in record donations. We also now know that history will record Trump's impeachment as nothing more than the desperate act of the most angry group of House Democrats in our country's history. It was distinctly partisan, it was highly prejudicial to the Republicans and to Trump (they were all excluded from the testimony phase of the inquiry), and it was profoundly bitter and angry. History will record Rep. Adam Schiff as a conniving clown who fabricated charges, fabricated testimony, interpreted Trump's conservation with Ukrainian president Volodymyr Zelensky using his own personal and political slant, and essentially fabricated the two articles of impeachment without any actual crime committed (not that it is absolutely necessary) and in the most ambiguous and undefined terms. It was truly a "Schiff Show."

So let's take a look at this most solemn and serious of government processes - Impeachment of a US President.

Impeachment is the process whereby we can attempt to remove a president of the United States, other civil officers, or federal judges because of some egregious conduct.

As we'll see, the term egregious conduct is what is and MUST BE the standard and the basis to legally attack a sitting president of the United States, or the other officers and judges, and then to remove him (or her) from office. So rabid were the House Democrats in their quest to destroy President Trump that their articles included a provision that he not be eligible to hold any other official public office.

Article II, Section 4 of the US Constitution provides:

"The President, Vice President, and all civil officers of the United States shall be removed from office on impeachment for, and conviction of, treason, bribery, or other high crimes and misdemeanors."

Clearly, members of Congress are not subject to the Impeachment process. Each house of Congress has its own set of rules to govern conduct, breach of conduct, and punishment.

Justia US Law explains even further what the drafters of the Constitution and our Founders envisioned with Impeachment:


Also notice that the operative words in Article II, Section 4 are "shall be removed from office." And that's what it's all about, right? It's about removing such an officer (and here we are specifically referring to the President of the United States) because of some horrendous conduct that is so shocking and repulsive as to erode general confidence, on a bi-partisan basis, in his ability to continue as the Chief Executive of the United States.

The provisions in the Constitution, which as we shall see, are written in simple and plain language, and without any detail, were designed to mirror the process of removal that was followed in Great Britain in the 14th century. Alexander Hamilton explains this in his essay, Federalist No. 65.

The purpose of Impeachment, therefore, is not to shame the president, insult him, demean him, tarnish his name or his legacy, diminish his likability with the American people, or to erode his chances of re-election. And it most certainly isn't the process to use to undue a legitimate and constitutional election - to reverse the decision of the American people and the Electoral College at the ballot box, the sacred venue of the people to exert their voice in government. The purpose is to address a most serious and egregious violation (criminal or otherwise - "treason, bribery, or other high crime or misdemeanor") and remove him from office because of it.

Democrats, as always, ignore the Constitution.

The Constitution gives the US House of Representatives the sole power to impeach the president (that is, to bring charges against him) and it makes the Senate the sole body to try him on those impeachment charges. That is, the Senate alone has the power to convict or acquit the President on the charges.

So what is the "process" of Impeachment? Clearly, and expressly, it is a 2-step process that takes place in the most powerful branch to counter the Executive - the Legislative branch.

Article I, Section 2 of the Constitution provides: "The House of Representatives shall have the sole power of impeachment."

Article I, Section 3 provides: "The Senate shall have the sole power to TRY all impeachments."

This latter provision necessarily implies something extremely important - it implies that Due Process is required in the Senate "trial." In other words, the President, like any other civil officer of the United States who has impeachment charges brought against him (or her), has the right to address the charges, the right to address those who brought the charges against him, and in general, the right of Due Process.

Due Process is one of the essential cornerstones of our American society. It passes down from the British system which hails a sordid history where kings abused the rights of their subjects and in fact, targeted their political opponents to silence them. "Due Process" guarantees that before depriving a citizen of life, liberty or property, government must follow fair procedures. Citizens are entitled to have the government observe or offer fair procedures to secure said rights of life, liberty, or property (or other rights offered to citizens). Action denying the process that is "due" would be unconstitutional. Here is an example we can all appreciate: Suppose, for example, state law recognizes the right of every student to exercise the tenets of their religion (as long as it doesn't interfere with or burden the learning environment). Before the state could deny, for example, a student from wearing a cross or using a backpack that displays an image of the crucifixion, it would have to provide fair procedures, i.e. "due process."

The Constitution states only one command twice. The Fifth Amendment says to the federal government that no one shall be "deprived of life, liberty or property without due process of law." And the Fourteenth Amendment, ratified in 1868, uses the same eleven words, called the Due Process Clause, to describe a legal obligation of all states. These words have as their central promise an assurance that all levels of American government must operate within the law and provide fair procedures.

Regarding the recent impeachment of Donald Trump, he clearly had a right at stake. He campaigned for the office of the presidency (like no other candidate ever did, by the way) and he won. He was duly and constitutionally elected to the office by the American people and our Electoral College system.

In short, Trump had a right to the Presidency.

And House Democrats, out of hatred, political ambition, and extreme anger and desperate frustration, tried to deny him this right by passing two ridiculous Articles of Impeachment - (1) Abuse of Power, and (2) Obstruction of Congress.

According to the Impeachment process, according to the Constitution, the Senate was obligated to give President Trump his "day in court," so to speak. And his legal team (including the esteemed attorneys Jay Sekulow, Pat Cippolone, Kenneth Starr, Alan Dershowitz, Pam Bondi, Pat Philbin, and Robert Ray) did an absolutey brilliant job.

I was lucky and honored to have been ale to sit in the Senate chambers to observe the proceedings. What an experience to observe such a historical event.

The Constitution doesn't provide much detail or insight into what constitutes a "high crime or misdemeanor" sufficient to warrant removal from office, so we look to our nation's history to see what past attempts at impeachment have taught us.

First, we should note that Impeachment was always intended as a process that was hardly ever to be used. It was to be reserved for the most egregious of behavior. Ken Starr addressed this in the remarks he delivered to the Senate. He explained that Impeachment was intended to be used, if ever, maybe every century. But something happened in the latter part of the 20th century to "weaponize" impeachment. He described it as "The Age of Impeachment." It began, he explained, with Richard Nixon and the Watergate Scandal cover-up that he engaged so aggressively in.

President Richard Nixon was not impeached, as it turned out, but he was threatened with it. Congress was getting ready to bring articles of impeachment against him, including, of course, "Obstruction of Justice." Nixon was convinced that too many representatives and senators, from both sides, were so disgusted and repulsed by how aggressively he obstructed justice during the Watergate investigation (obstructed the Starr investigation, as Independent Counsel), that they would have easily voted to impeach and then remove him. And so he decided to reign - to save face.

That would have been an actual and authentic exercise of the Impeachment process. Richard Nixon clearly used terrible judgement and used the full power of his office and the power of the federal government to cover up some illegality perpetrated by others (ultimately for his benefit in the upcoming presidential election).

Impeachment of a President has occurred in our nation's history only three times - with Andrew Johnson (1868), Bill Clinton (1998), and Donald Trump (2019). None of them were removed from office, even though impeachment charges were brought against them by the House. Johnson came the closest to being impeached, and we'll look more closely into how that happened.