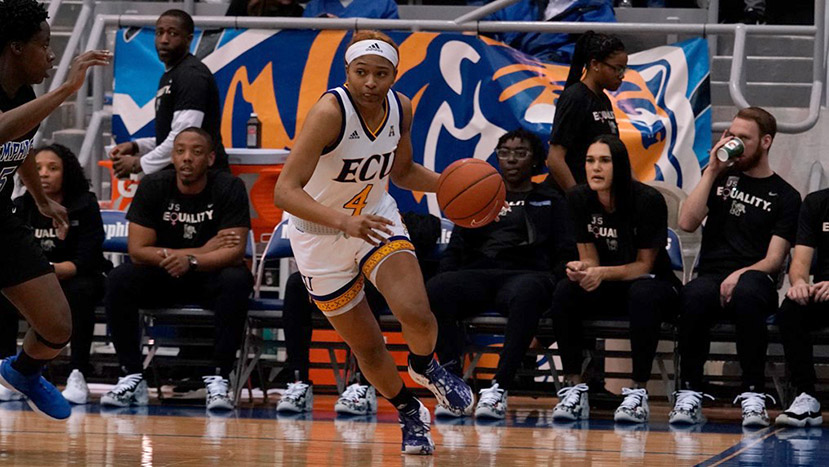 GREENVILLE, N.C.     Coming off its third win in five games, the ECU women's basketball team will try to win consecutive conference games for the first time as the Pirates host Tulsa on Wednesday night.

ECU (6-18, 3-8 AAC) has won three of its past five games, but has not been able to win two in a row since November. The Pirates are coming off a hard-fought 61-57 win at Memphis. Taniyah Thompson finished with a team-high 18 points in the win, including 12 in the fourth quarter and was named AAC Freshman of the Week for the second time this season. Thompson leads all AAC rookies in scoring (13.4 ppg), steals (2.1) and minutes played (34.7). The only Pirate averaging more points than Thompson is Lashonda Monk, who is scoring 14.1 points and also had 18 against the Tigers. Monk is coming up on a few career milestones. She is leading the conference in steals and is third in the nation, averaging 3.88. Monk has 284 steals for her career, putting her eight short of Toina Coley for the ECU career record. The junior guard is also 34 points away from 1,000 for her career and will become the 23rd player to reach 1,000 points and the first since Jada Payne in 2016. Dominique Claytor is averaging 11.8 points and 6.4 rebounds over the past five games and in the three games ECU won, scored at least 12 points. The Pirates are 4-1 this season when Claytor scores at least 10 points.

Tulsa (7-18, 2-10 AAC) snapped a five-game losing streak with a 65-58 win over SMU. Kendrian Elliott is in the top-15 of the AAC in both scoring (13.2 ppg) and rebounding (8.3 rpg). Elliott ranks 51st in the nation in field goal percentage, making 52.5% of her field goals. Addison Richards is second on the team in scoring, averaging 8.1 points and is coming off a 25 points, 13 rebound performance in the win over SMU. Alexis Gaulden is fourth in the AAC in assists per game, handing out 4.4 each night and is sixth in steals per game, averaging 2.05. As a team, the Golden Hurricane as 74th in steals, racking up 228 so far this year. Like the Pirates, the Golden Hurricane struggle on the boards, getting out-rebounded by a margin of 7.5 per game, which ranks 332nd in the NCAA.

Tulsa has a slight 12-11 lead in the all-time series, including a 58-56 win earlier this season. Monk had 20 points to lead ECU in the loss, while Thompson had the first double-double of her career, scoring 16 points and grabbing 10 rebounds. Elliott had a quiet game for Tulsa offensively, finishing with just nine points, but she did grab 14 rebounds. Kayla Moutry, who is averaging just 3.6 points, led Tulsa with 19 points while Rebecca Lescay had 15. This will be the ninth time ECU and Tulsa have met twice in the same season. In the previous eight, each team has swept the season series twice and the schools have split the games in four different years, including last year. At home, the Pirates have a 5-5 record against the Golden Hurricane, the most recent game being a 75-55 loss in January 2019.

Tipoff is scheduled for 7 p.m., inside Minges Coliseum and tickets are available HERE. Fans can also watch the game HERE or follow the live stats HERE.