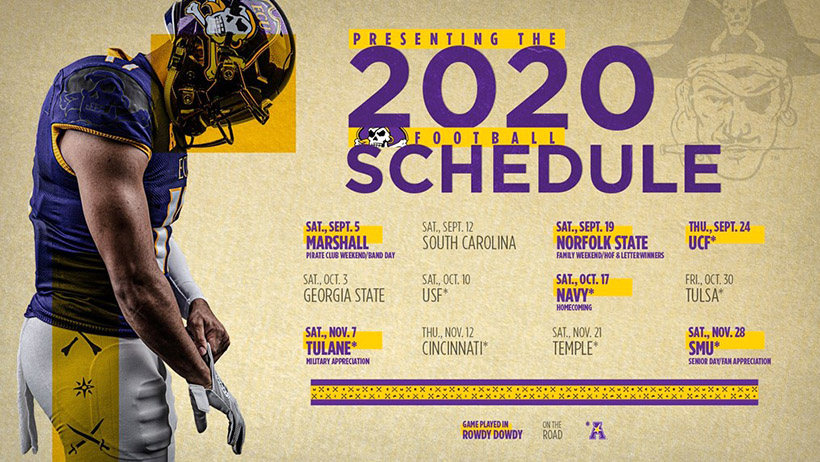 The Pirates' seventh campaign in the AAC will officially begin when they welcome UCF to Bagwell Field inside Dowdy-Ficklen Stadium on Thursday, Sept. 24. In addition to the matchup against the Knights, the league and its primary television partner - ESPN - also included two other ECU games among its early broadcast selections with a Friday visit to Tulsa (Oct. 30) and another Thursday night battle at Cincinnati (Nov. 12).

While both halves of the new schedule are split evenly with three home and three road games each, ECU will open head coach Mike Houston's second campaign by playing three of the first four at Dowdy-Ficklen Stadium. On the back end, the Pirates will have to travel for three of their last five contests.

In all, the Pirates will face eight opponents which made bowl appearances in 2019. In addition to squaring off against the AAC East Division champion Bearcats, other road dates versus postseason qualifiers include Georgia State and Temple. Besides the Thundering Herd and Knights, ECU will welcome Navy, Tulane and SMU to Greenville this fall.

"We are looking to forward to the opportunity to compete each week against a challenging schedule as we continue to build our football program," Houston said. "Playing three games on a national stage certainly enhances our exposure and we're appreciative to the American Athletic Conference and ESPN for its commitment to put us in a position to move forward and pursue our goals to compete at the highest level possible."

Season tickets are currently on sale with packages starting as low as $99 for the Pirates' six-game home schedule. To make purchases or for more information, please visit ECU's Online Ticket Office or by calling (252) 737-4500.

INCLUDING THE SEC & EXCLUDING THE ACC     The meeting against South Carolina at Williams-Brice Stadium will mark ECU's seventh matchup against a Southeastern Conference opponent since 2011 (and first since dropping a hard-fought 20-15 decision to the Gamecocks in 2016). On the flipside, the 2020 campaign will snap a 21-year run in which at least one opponent from the Atlantic Coast Conference has been featured on an East Carolina schedule. The 1998 season marked the last time the Pirates did not square off against an ACC foe.

SPEAKING OF THE GAMECOCKS     Mike Houston's only visit to Williams-Brice Stadium as a head coach was a successful one. While leading The Citadel's program, Houston pinned a 23-22 loss on South Carolina on Nov. 21, 2015 - his final year with the Bulldogs. The Citadel racked up 350 rushing yards during the triumph.

OPENING IT UP, CLOSING IT OUT     East Carolina's AAC opener against UCF on Sept. 24 will mark the first time the Pirates begin league play at home since 2016 (also vs. the Knights). In fact, ECU has only started conference action at Dowdy-Ficklen Stadium twice since becoming members of The American (SMU in 2014 was the other). On the other hand, the Pirates will close out the regular season in Greenville for the second-straight year - a first since the 2014-2015 campaigns - when they face the Mustangs on Nov. 28.

NON-SATURDAY ACTION     With a pair of Thursday night games and one Friday evening contest booked in 2020, the Pirates have three non-Saturday tilts on their schedule - a first since 2015 (which featured a Thursday split with UCF/W and Temple/L, a Friday setback at Connecticut). East Carolina's 2014 slate featured a program-high four "weekday" matchups (three on Thursday vs. UConn/W, Cincinnati/L and UCF/L, along with a Friday visit to Tulsa/W).

BALANCED DIVISIONAL LINEUP     With the departure of UConn, ECU will now play four games each against both the AAC East and West Divisions (instead of the previous 5/3 arrangement). The Pirates will again face 2019 West opponents Navy, Tulsa and SMU this year, but have also added a home game vs. Tulane as a replacement for the Huskies on the 2020 docket.

AMERICAN CONFERENCE CHAMPIONSHIP     The American Conference will conduct its championship game on Dec. 5. The title clash pits the winners of the East and West Divisions on the home field of the highest-seeded team.

KICKOFF TIMES     Kickoff times for the first three weeks and ECU's three non-Saturday games will be announced in May, while the remainder will be through the traditional 12-day/6-day process.