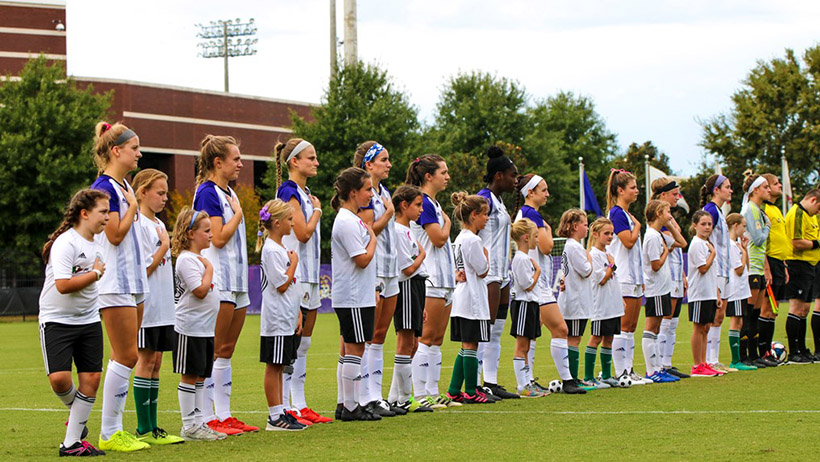 GREENVILLE, N.C.     The ECU soccer team will play six matches during its 2020 spring schedule, as announced by head coach Jason Hamilton on Monday.

"I think there are a few things that stand out about this schedule for the spring," said head coach Jason Hamilton. "First, is the level of competition. The defending back-to-back NWSL champions with five members of the US Women's National Team jumps out at you, which will be a great experience for our ladies, but all of the other teams we face are very successful programs that finished in the top 115 RPI last fall. Second, the events in which we are showcasing our group. These events allow our ladies the opportunity to showcase our talents, but it allows them to be role models and ambassadors to the younger girls that aspire to play at this level."

The Pirates kick off the spring slate on March 21 when they take on VCU at the Jefferson Cup Showcase in Richmond, Va with the match starting at 1 p.m. The next weekend, on March 28, ECU will be at the Southern Soccer Showcase at BB&T Sports Park in Bermuda Run, N.C. There, the Pirates will take on Wake Forest at 11 a.m., and UNC Wilmington at 2 p.m.

The April portion of the schedule starts with a trip to Old Dominion on April 4. Kickoff for that contest is at 2:30 p.m.

On April 10, ECU will get the unique opportunity to take on the two-time defending National Women's Soccer League champion NC Courage at WakeMed Soccer Park in Cary, N.C. The Courage's roster includes seven players that represented their countries at the 2019 FIFA Women's World Cup, five of which were on the world champion USWNT. Kickoff between the Pirates and the Courage is slated for 12 noon with admission free for all fans.

The spring schedule comes to an end on April 18 with a rematch with UNCW. ECU will take on the Seahawks at 12 p.m., at the UNCW ID Camp.

ECU is coming off a 2019 that saw the Pirates finish 5-10-3 and miss the AAC Tournament by a single point. ECU will bring back three of its top four scorers as well as 2019 AAC Second-Team All-Conference selections Kim Sanford and Melanie Stiles.