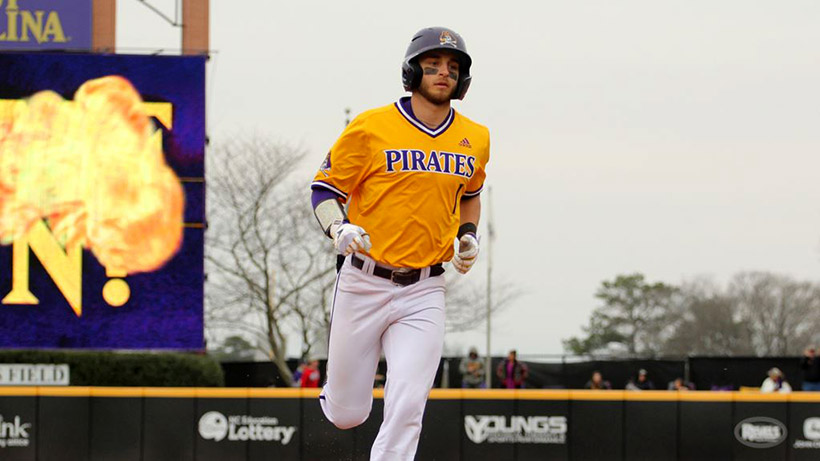 GREENVILLE, N.C.     Thomas Francisco and Connor Norby each drove in a pair of runs, while the Pirates pitching staff struck out 17 batters in No. 19 East Carolina's 7-4 win over William & Mary Sunday afternoon at Lewis Field inside Clark-LeClair Stadium. With the win, the Pirates open the 2020 season with a series sweep of the Tribe their third in the last four seasons.

Giles actually appeared twice on the mound as he took over for Saylor in the seventh inning with the bases loaded and registering a pair of strikeouts to end the frame. He took the mound to start the eighth and after allowing a run on three-straight singles, he was replaced by Agnos who got a pair of outs before he was pulled and Giles took the bump again. The right-hander entered with the bases loaded once more and struck out Tyler Solomon for the second time in the game to get out of the jam.

ECU wasted little time getting on the board as it strung together four consecutive singles to start open the frame for a 3-0 lead. With runners on the corners, Alec Burleson singled through the right side plating Agnos and moving Lane Hoover over to third. Francisco roped a shot through the right side scoring Hoover just before Burleson darted home when Norby hit into a double play.

The Pirates added to their lead in the third on Seth Caddell's RBI fielder's choice that pushed across Burleson, who reached when he was hit by a pitch to begin the stanza. A Francisco walk put two runners, while Norby's sac bunt moved both up 90 feet.

William & Mary scored runs in the fourth and fifth innings pulling within 4-2. Matt Thomas' triple off the right field wall, which was the Tribe's first hit of the contest, set up the first run as he strolled home on Solomon's single to right field in the fourth. Thomas then singled home Phil Conti in the fifth with a shot to right field.

The Pirates would extend their lead to 7-2 after scoring a pair of runs in the seventh. Francisco drove in Hoover with a base hit through the right side and Norby's single through the left side plated Burleson.

Two runs by the Tribe in the eighth capped the scoring at 7-4.

Nine Pirates combined for 13 hits with Agnos, Francisco, Hoover and Norby each collecting a pair. Francisco and Norby drove in two runs, while Caddell and Burleson each had an RBI on the day.

ECU returns to action on Wednesday, Feb. 19 when it travels to Campbell for its first midweek matchup. First pitch is slated for 5 p.m. (ET) at Jim Perry Stadium.