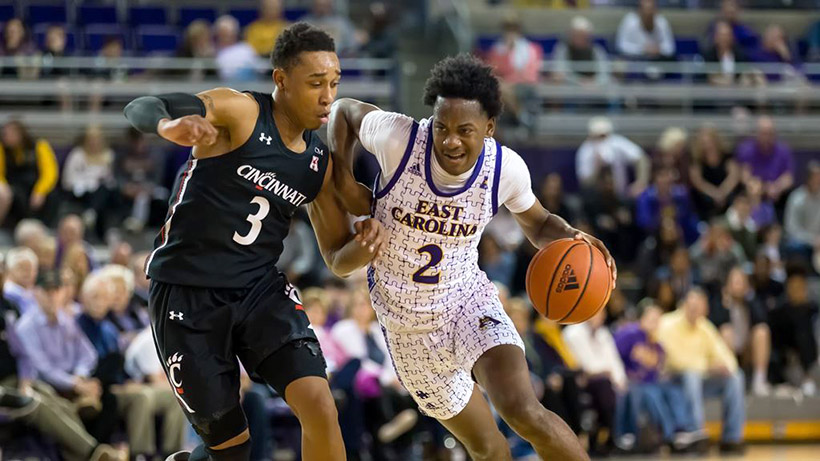 GREENVILLE, N.C. (AP)     Keith Williams scored six of his 17 points in overtime and Cincinnati pulled out a 70-67 win over East Carolina on Sunday.

Williams, who missed a contested drive at the end of regulation, followed up a Mika Adams-Woods basket with a 3-pointer to put the Bearcats on top 66-61 midway through overtime. After an East Carolina free throw, Williams hit again.

Tristen Newton hit a jumper and J.J. Miles, who forced OT with a 3 with 11 seconds in regulation, followed with a 3-pointer to pull ECU within 68-67. Adams-Woods made 1 of 2 free throws with 32 seconds to play. The Pirates missed a shot but got the ball back when the rebound was knocked out of bounds. However, Jayden Gardner lost the ball out of bounds on a drive to the basket.

Williams made 1 of 2 free throws with 3.9 seconds to play but Gardner's 3-point attempt was well short.

Neither team had a double-figures lead. The Bearcats had an 11-0 run early in the first half and led 30-27 at the break. East Carolina used an 11-0 run to lead by eight near the midpoint of the second half but Cincinnati immediately responded with 10 straight.

Tre Scott scored 14 points and grabbed 12 rebounds for the Bearcats (17-8, 10-3 American Athletic Conference), who have won seven of eight. Chris Vogt and Jarron Cumberland added 13 points each and Adams-Woods had 10. It was the sixth OT game for UC this year, tying a school record.

ECU Head Coach Joe Dooley     Opening Statement     "Obviously very disappointed. Back and forth game. I thought we had, as I'm sure they did, some opportunities to get some separation. You know we had an eight point lead and then they go on a 20-4 run. We look like we are in a bit of trouble and then we fight back, and we had a couple of untimely turnovers and a couple of bad possessions, but I thought [Cincinnati] stepped up, especially [Keith] Williams; he made some good plays, which good teams do."

On the start of overtime     "We slowed down a little bit. Obviously we missed a couple of shots, and then they start off 5-0. Then you try to get your guys back. I thought our pace offensively slowed down a little bit, and I didn't think we pivoted as well. We got down to the paint but we didn't pivot the ball back out like we needed to."

On being encouraged by the team's progress     "There is winning and misery. We've got to figure out these little deals like how to get shots, every possession down the floor. How to fix these little deals that we are gaining, but we are not where we need to get yet.

Sophomore Jayden Gardner     On the outcome     "I guess the only way to view this as a positive is like what we've been doing all year. We can play anybody in this league, and we've got to build on it and get ready for Memphis. We fought extremely hard tonight, it's just disappointing."

"We try hard every time we come on the court. We took some big charges; we're just going to keep fighting on both ends of the floor. Hopefully we'll come out with a W next time."