For the fourth straight game, the ECU women's basketball team will be playing a rematch of an earlier meeting. This time, the Pirates will have won the first round as they head to Memphis on Saturday, looking for the season sweep. east carolina university, ECU, women's basketball, memphis, gameday, february 14, 2020
Home
Categories
Login 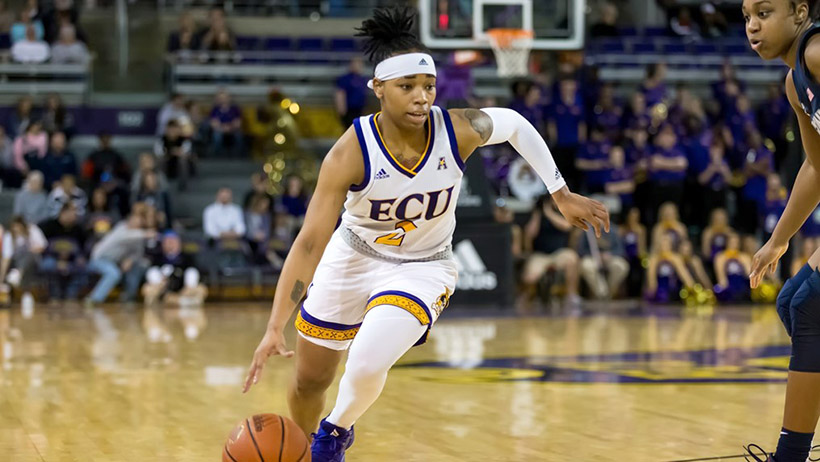 GREENVILLE, N.C.    ; For the fourth straight game, the ECU women's basketball team will be playing a rematch of an earlier meeting. This time, the Pirates will have won the first round as they head to Memphis on Saturday, looking for the season sweep.

ECU (5-18, 2-8 AAC) is coming off a 53-45 loss at SMU. The Pirates took the lead early in the fourth quarter, but a scoreless streak allowed the Mustangs to pull back ahead and take the win. Taniyah Thompson has been on a tear over the past four games, averaging 19.8 points and has scored at least 20 in three of those four. She is averaging 13.2 points overall and 14.2 in conference games, placing her 11th in the league. Lashonda Monk struggled at SMU, but is still leading the Pirates with 13.9 points per game. Monk is up to 88 steals on the season, which leads the AAC and ranks fifth in the country. She needs 13 to tie Toina Coley for the school's all-time record in career steals. Monk is also closing in on 1,000 career points as she currently has 948. Dominique Claytor is also in the top-15 in the nation in steals, ranking 14th with 72. Claytor needs just three more takeaways to move into the ECU top-10 in single season steals. Monk's total of 88 is currently fifth. As a team, the Pirates have 318 steals, which ranks second in the country. The Pirates have a chance to break the school's single-season record of 388 set in 2012-13.

Memphis (13-11, 4-6 AAC) has won three of four since losing to the Pirates, the most recent a 69-60 win at Wichita State. The Tigers have been missing leading scorer Jamirah Shutes, who has not played since January, but Dulcy Fankam Mendjiadeu has stepped up and is now averaging 11.8 points and 8.3 rebounds. She is coming off a 19 point, 12 rebound double-double against the Shockers. Alana Davis is averaging 8.6 points and 4.5 rebounds, but she had 17 points in the first meeting between the two schools. Madison Griggs has an uncharacteristic shooting day in Minges Coliseum, going 0-5 from three. She is leads the conference and is 20th in the nation in three-point field goals made with 67. As a team, the Tigers shoot 34.7% from beyond the arc, which ranks 48th in the NCAA.

Memphis holds a slight 17-15 advantage in the all-time series between the two schools, mostly thanks to a 12-3 record in Elma Roane Fieldhouse. The Pirates have not won in Memphis in eight straight meetings, the last win coming in 2010. That was also the last year ECU swept the Tigers, with the Pirates winning in both Greenville and Memphis as well as in the C-USA Tournament. The Pirates also swept the Tigers in 2007 and 2006. In order to complete the sweep, the Pirates will again be looking to have multiple players score in double-figures. In the first win over the Tigers, Thompson (20), Claytor (16), Ryann Evans (12) and Monk (10) all had at least 10 points. The quartet also all scored at least 10 points in ECU's other conference victory, a win over Houston.

Tipoff is scheduled for 3 p.m., in Elma Roane Fieldhouse. Fans can watch the game HERE or follow the live stats HERE.