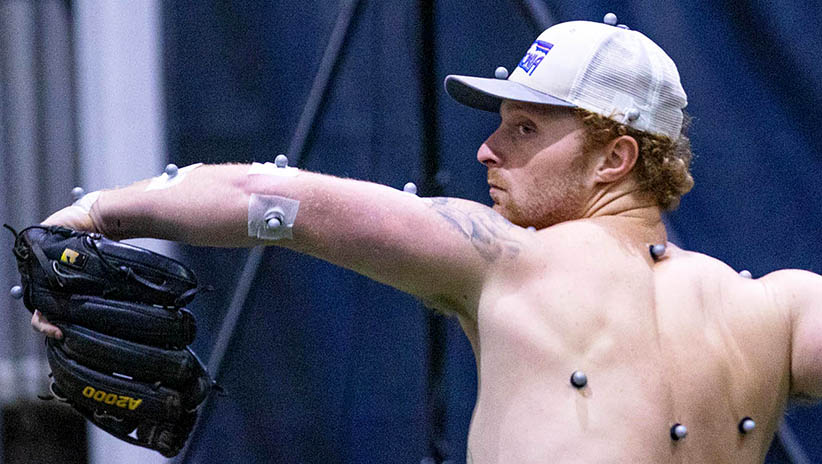 As a baseball pitcher, Evan Voliva has simple goals.

"I just want to throw hard, throw well and strike out a lot of guys," he said.

As a fan of baseball and an East Carolina doctoral candidate researcher, Christopher Curran wants to help Voliva, and indeed all baseball pitchers, do just that.

Curran is conducting research at ECU that may one day reduce injuries and improve the performance of pitchers. The research involves the collection of three-dimensional motion capture data of the full body during the pitching motion. That data is then used to create a pitcher's skeleton and analyze pitching mechanics with a high level of precision.

Curran recently worked with Voliva, a 2019 ECU graduate and former member of the Pirates baseball team, at Next Level Training Center in Greenville. Curran attached reflective markers to Voliva, who then threw about a dozen pitches so Curran could record the pitching motion.

"I'm grateful to be a part of this," said Voliva. "It's kind of a new thing, and a lot of Major League teams are starting to use this now, and I'm just glad to get the opportunity to be a part of this and start learning things that are new to the game of baseball."

Curran grew up playing baseball and continued at Grove City College in Pennsylvania.

"What actually got me into biomechanics were injuries in high school and college," Curran said. "I went through physical therapy at the Cleveland Clinic, and that was my first exposure to biomechanics and understanding that in addition to what coaches see with their eyes, we can start to apply numbers and real quantitative results. I've always had a curious mind, and now being able to combine those two passions is really exciting."

Curran said the technology that is available through ECU's Department of Kinesiology - where he is finishing his doctorate in bioenergetics and exercise science - fuels those passions.

"Being able to work with technology like this is in many ways a dream come true for me," Curran said. "I knew I wanted to continue working in baseball in my career, and being able to incorporate the research aspects with baseball through this technology like motion capture and ultrasound has really provided a lot of enjoyment for me through my schoolwork. We're fortunate to have the type of technology we have here at ECU. To be honest, it's one of the reasons why I chose to come here for graduate school and chose to stay here for my Ph.D. We have elite technology that allows us to do cutting-edge research."

Curran is using that technology to help understand the effect pitching has on not only the structural characteristics - meaning the size and shape - of muscles tendons and ligaments, but also the material stiffness of those tissues. Curran said this type of research recently found that the ulnar collateral ligament (UCL) in the elbow - known for being repaired during Tommy John surgery - is less stiff in the throwing arm of pitchers than the non-throwing arm. An understanding of tissue properties that are linked to injuries could help pitchers develop throwing motions that are better for the muscles, tendons and ligaments, thus allowing the players to maintain better health while optimizing performance. 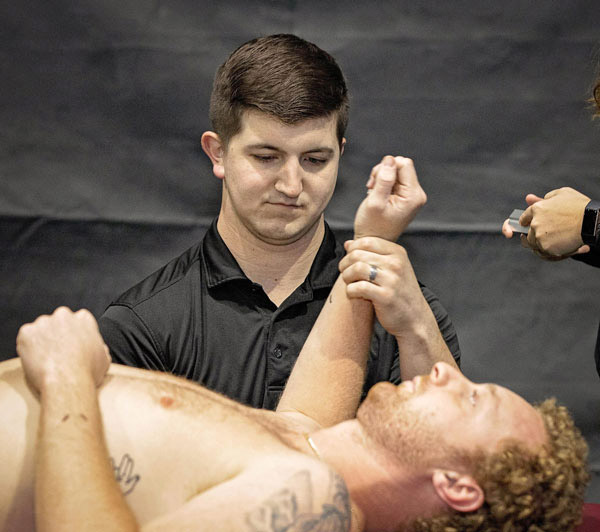 Christopher Curran, top, works with pitcher Evan Voliva.
"If down the road we learn that throwing a certain way causes specific adaptations that may make someone more likely to get injured, we can work with coaches to change that," Curran said. "I don't think that means every pitcher should throw the same way. The amazing part of the technology we have is the ability to do this on an individual basis. We know with the motion capture how each individual person throws and we know how each individual person's tissues are, and we can work on an individual basis instead of trying to apply a one-size-fits-all solution. I think that's the really exciting part."

Curran has worked with more than 25 pitchers from various teams since November, including some like Voliva who had undergone some type of surgery. The testing has been done at Next Level Training Center in Greenville, Baseball Rebellion in Durham and Diamond Xtreme in Greensboro. Though he may have some preliminary results of his study by the end of this month, he's not expecting a full report until April.

"Even the findings of this research are probably going to add more questions than they will definite answers," Curran said.

For Voliva, the research is personal. He had Tommy John surgery to repair his ulnar collateral ligament in his pitching elbow in 2017. He pitched in just four games in 2018, but fully recovered and made 32 appearances for the Pirates in 2019, recording a 5-4 record with four saves and an earned run average of 3.19. He struck out 49 batters.

The New York Yankees selected Voliva in the 18th round of the 2019 Major League Baseball draft, and the right-hander is expected to report for spring training later this month.

Voliva believes the information Curran discovers in his research could be an important step for his career and for his health.

"I feel comfortable with the data, and whatever he finds out, I'm pretty comfortable with it and it will help make me better," Voliva said. "It would be awesome to be able to take the next step after this."