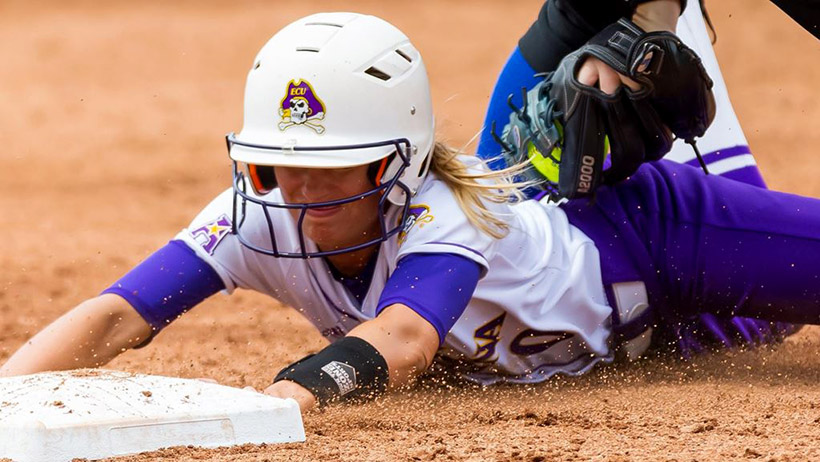 CONWAY, S.C.     Freshman RHP Logyn Estes picked up her first collegiate win in the circle and added a home run for good measure as East Carolina defeated Campbell 4-1 Sunday afternoon to close out the Kickin' Chicken Classic at St. John Stadium on the campus of Coastal Carolina University.

The Pirates improve to 2-3 overall while the Camels drop to 0-4.

Estes (1-0) tossed 5.1 scoreless innings, scattering three hits with a walk and a strikeout. Junior RHP Whitney Sanford was credited with her first save of the season, throwing the final 1.2 frames. She allowed just one run on two hits, walking one batter and striking out one as well. Kayla Howald (0-2) took the loss, surrendering four runs (two earned) on six hits with two walks and seven strikeouts.

In addition to a strong effort in the pitching role, Estes collected a team-best two hits, including her first career home run. Destini England rapped out a pair of hits to lead Campbell's offense.

Estes opened the scoring in the bottom of the second when she cleared the centerfield fence with one out. After senior outfielder Olivia Narron led off the home half of the third with a hit, she stole second and moved to third on a passed ball before scoring on an error in the outfield.

Sanford squashed a Camel rally in the top of the sixth, inducing a liner to right field with a pair of runners on base to preserve the Pirates' two-run advantage. The East Carolina offense capitalized in the bottom of the frame, scoring a pair of runs off of another Campbell error and a Kendra Ziemba RBI single.

Cassie Wancheck put the Camels on the board in the top of the seventh with a solo home run, but Sanford retired the next three batters in order to seal the victory.

ECU opens up a 10-game homestand Friday at 3 p.m. when it hosts Hampton as part of the Pirate Clash. DePaul and George Washington will also take part in the tournament.