What once looked like a comfortable win ended up coming down to the final possession, but the ECU women's basketball team held on to beat Houston 53-50 on Saturday afternoon in Minges Coliseum. east carolina university, ECU, women's basketball, houston, final score, february 10, 2020
Home
Categories
Login 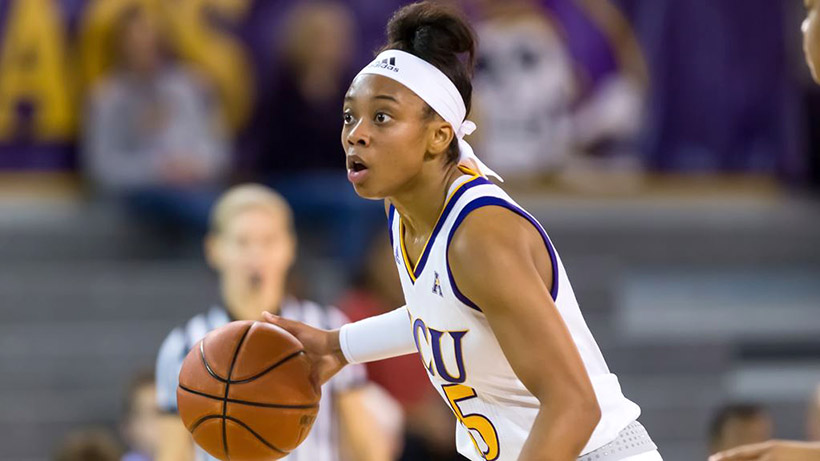 GREENVILLE, N.C.     What once looked like a comfortable win ended up coming down to the final possession, but the ECU women's basketball team held on to beat Houston 53-50 on Saturday afternoon in Minges Coliseum.

ECU (5-17, 2-7 AAC) won its second straight game at home and had four players score in double-figures in both of those wins. Lashonda Monk, Dominique Claytor and Ryann Evans all had 12 points to lead the Pirates while Taniyah Thompson finished with 11 points. Monk added seven assists and seven steals while Claytor had nine rebounds for the third time in four games. Evans added seven boards of her own.

Houston (12-12, 5-5 AAC) was led by Dorian Branch, who finished with 22 points. Tatyana Hill had her second straight double-double against the Pirates, finishing with 12 points and 13 rebounds while Bria Patterson finished with 10 points. Julia Blackshell-Fair had just two points, but handed out nine assists for the Cougars.

Although Houston cut into the lead, thanks to seven points from Patterson and four points from Branch, a layup by Thompson at the 2:33 mark put ECU up 48-38.

From there though, the Pirates had to hold on for dear life. Branch hit a three and then Hill made a pair of free throws on the next possession to cut the lead to five. Monk was fouled on a jumper with 1:18 to go and made two free throws of her own, but Branch came down and nailed a triple to get Houston within four.

After an ECU turnover, Branch found Hill for a layup and it was a one possession game. The Cougars got a stop and had a chance to tie the game, but had an unforced turnover to give ECU the ball again.

Monk was fouled with just 18 seconds to go and made her first free throw and missed the second, but ECU was able to control the rebound. Evans was then fouled and she made one of two to push the lead to four. After a Houston miss, Evans grabbed her seventh rebound and was once again sent to the free throw line. When Evans hit one-of-two, ECU led by five with just 11 seconds remaining.

However, Houston made sure that lead was not comfortable for the Pirates. Blackshell-Fair made a running jumper with three seconds left and then the Cougars forced ECU into a turnover, giving Houston the ball with a chance to tie. Branch got free in the corner and thought she had the game-tying shot, but Tiara Chambers flew out to swat it away, preserving the win for the Pirates.

ECU will make its second trip of the season to the state of Texas when the Pirates take on SMU in Dallas. That game is scheduled to tipoff at 8 p.m., on Tuesday night.


ECU Quotes     ECU Head Coach Kim McNeill     Opening Statement: "I'm extremely proud of this team. Every day we fight in practice and obviously the season isn't going the way we want it to go, but kudos to my team for not putting their head down. You can take every experience and learn from it. We'll watch the last eight minutes of this game and learn from it. We've got a lot of young kids out there that haven't been in this situation. So, we're going to watch and learn from this experience and make sure that we can execute better down the stretch. I felt like we were playing to not lose instead of playing to win. We've got to keep our foot on the pedal and keep executing our offense and keep running everything in stride instead of backing it out and being a little timid. I'm so proud of this team and their ability to pull it out down the stretch."

On the defensive effort: "That's who we are. From day one I told you guys that we would be a defensive-minded team. I just feel like you can control your effort, and defense is all about effort, because some nights the ball just might not go through. We're still building our defensive philosophy; we're still getting the kids to buy into it. Our system takes a while, but it just goes to show that our defense won the game with Tiara (Chambers) getting that big block right there at the end. This is something that we can be prideful of and build some confidence off of."

On ball movement: "We're a better team when we can get four players in double figures. Ultimately that's who we want to be. The last couple of games, teams have been really focusing on Lashonda (Monk) and Taniyah (Thompson) because they have been our leading scorers. I really feel like they've done a good job of handling that pressure. But when you have others step up big like (Dominique) Claytor, really stepped up for us; but if you really think about it, she stepped up big against Memphis too. Two games that we be able to win in conference play, she's been big in those games. So, it's really good for us to have another option when people are trying to take away Taniyah and Monk.

ECU freshman forward Ryann Evans     On winning on Girls & Women In Sports Day: "It feels great. It feels great to give back to all the women in the past that paved the way for us to be able to play. We've been grinding so it felt good to get a win here."

On getting a win against Houston after losing there earlier in the season: "It felt great, we knew we wanted to get back at them. We felt like it was a winnable game when we played there, so it felt great."