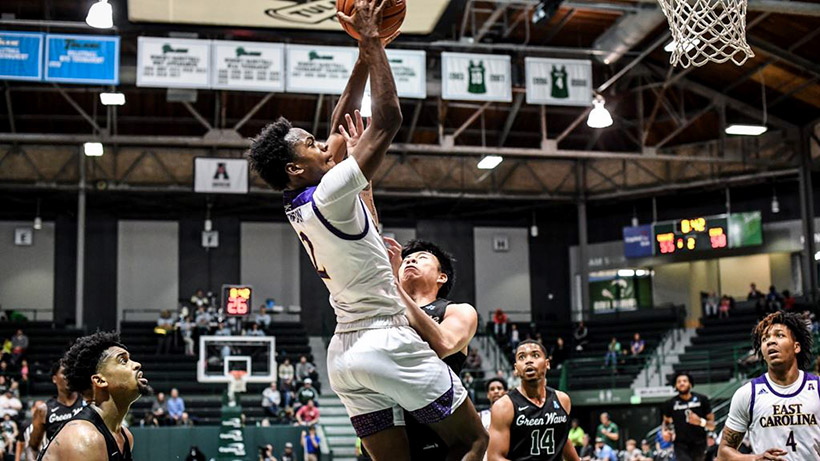 Despite 11 first half turnovers, ECU led 37-34 at halftime. The Pirates built a 17-10 lead in the first seven minutes, but trailed by one with seven minutes left in the opening half.

Newton then capped a 15-8 ECU run with his only 3 off the game to put his team back up by six, 35-29, with under a minute remaining in the half. Tulane's Christion Thompson made a pair of free throws with one second left before intermission to make it a three-point game at halftime.

Five different players scored for the Pirates in the first four of the second half as they quickly pushed their lead out to double figures.

Tulane cut the Pirates' lead to three, 64-61, with 4:50 to play but Jackson scored the game's next six points, converting two 3-point plays for a nine-point ECU cushion with 3:10 left in the game.

East Carolina ended the game on a 17-6 run to win its first road win of the year.

The Pirates finished the game shooting 52.7 percent from the floor, while holding the Green Wave to 37.7 percent. They also dominated on the glass, winning the battle of boards by 20.

ECU returns to action on Wednesday, Feb. 12, at Tulsa. Tip-off is scheduled for 8 p.m. EST.


POSTGAME QUOTES     ECU Head Coach Joe Dooley     "I thought we did some good things. We got off to a good start and the guys played with good energy. It is hard to win on the road. It's a good road win. I think it helps our guys a little bit. We've been on a little bit of a tear going the wrong way and hopefully we can use this as momentum to finish the season out."

"I thought we were good with the ball with 18 assists on 29 field goals. The only negative is we turned it over too much. We had some boneheaded turnovers, especially in the first half. Second half, we did a little better job. I thought for the most part though we moved the ball really well and the guys did a good job of sharing it."

"In the second half, I don't think we missed the front end of a one-and-one and we closed it out at the end which is what you need to do - step up and make your free throws. We did a nice job especially in the second half of rebounding the ball."

"We are better than we were a month ago. Sometimes it doesn't always show, but we're becoming a better team and the young guys are getting a lot of minutes. Hopefully that will helps us in the future."