After a full week off, the ECU women's basketball team will be back in action when the Pirates host Houston on Saturday afternoon inside Minges Coliseum. east carolina university, ECU, women's basketball, houston, gameday, february 7, 2020
Home
Categories
Login 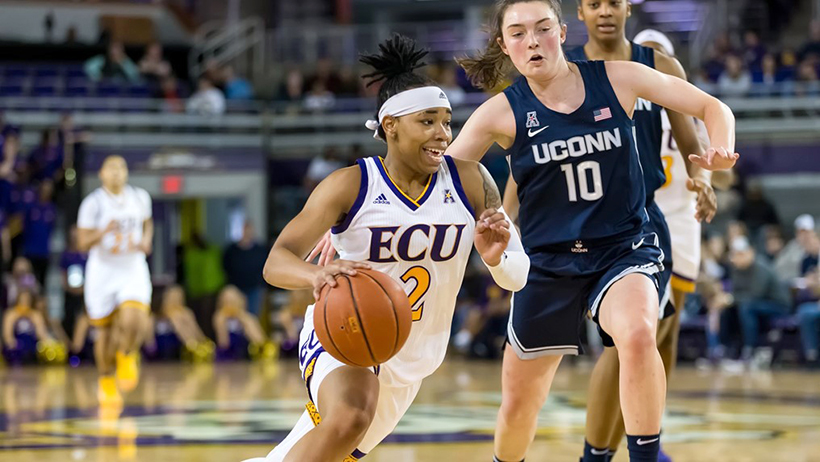 GREENVILLE, N.C.     After a full week off, the ECU women's basketball team will be back in action when the Pirates host Houston on Saturday afternoon inside Minges Coliseum. ECU will be celebrating National Girls and Women In Sports Day during the game and admission will be free for all fans.

ECU (4-17, 1-7 AAC) has had a week to regroup after a 57-55 loss at Wichita State that came down to the final seconds. ECU fought back from a seven-point deficit to take the lead with under 30 seconds to go, but the Shockers answered with a triple and a stop to take the victory. Taniyah Thompson was outstanding for ECU, scoring 25 points in 39 minutes. It was the second straight game Thompson had scored at least 20 points after she had 20 in a win over Memphis. That helped her become just the third ECU player to be named the AAC Freshman of the Week, joining current juniors Lashonda Monk and Ariyana Williams. Monk is the only Pirate scoring more than Thompson this season, with Monk averaging 14.6 points while Thompson is at 12.8. Dominique Claytor leads the Pirates with 5.4 rebounds per game and has grabbed at least nine in two of her past three games. That trio is also all in the top five in the conference in steals. Monk leads the way with 79 and is sixth in the country. She needs 22 more steals to tie Toina Coley for the ECU school record for career steals. Claytor is second in the conference and 13th in the country with 66 steals while Thompson is fifth in the AAC with 43 takeaways.

Houston (12-11, 5-4 AAC) has won two straight games and three of four coming into the weekend. Like Thompson, Houston's Diamond Gladney was honored by the conference, as she was named AAC Player of the Week after averaging 22.5 points. Gladney is eight in the conference in scoring in league games, averaging 16.4 points and she is scoring a team-high 12.5 points overall. Dorian Branch (11.2 ppg), Tatyana Hill (11.0 ppg) and Julia Blackshell-Fair (10.6) all join Gladney in scoring in double-figures. Houston has a short rotation, with three players averaging more than 36 minutes per game while three more average more than 20 minutes. Blackshell-Fair is sixth in the country in total minutes while Branch is ninth and Gladney is 12th. On defense, the Cougars are in the top-50 in the country in blocked shots, swatting 95 attempts. Five different players have blocked at least 10 shots, led by KeAsja Peace's 17 rejections.

It will be the second time the two schools have met this season as well as the second rematch of the season for ECU. The first meeting went to Houston 72-63 as the Cougars outscored ECU 44-32 in the second half. Gladney and Hill led Houston with 22 points each while Thompson scored 21 on 9-of-14 shooting for the Pirates. Houston is the second team ECU will have a rematch with, following the loss at Wichita State. The Pirates are now 11-12 in games against AAC teams that beat them earlier in the season. Overall, ECU is 23-20 in regular season rematches since the 2014-15 season. Between the two programs, Houston leads the series 14-8 and will be trying to sweep ECU for the second time in four seasons. The Cougars have won three straight against the Pirates and five of six since the 2016-17 campaign.

Tipoff is scheduled for 1 p.m., on Saturday afternoon in Minges Coliseum with free attendance for all fans. As a part of the celebration of National Girls and Women in Sports Day, the E.B. Aycock Middle School Chorus will be singing the national anthem while the Greenville Civic Ballet will perform at halftime. Pirate Nation can stream the game HERE or follow the live stats HERE.