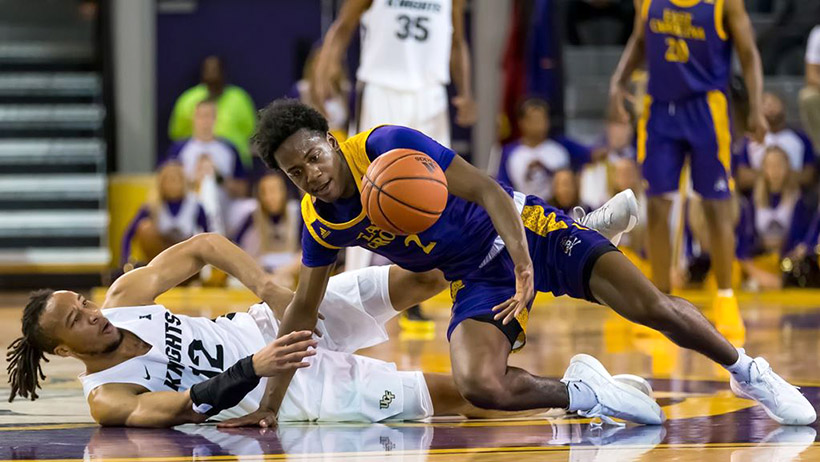 The Knights led 62-45 with 5:17 remaining. East Carolina then scored the next 11 points before Caesar DeJesus hit a jumper to put UCF up by eight with 1:38 to go.

ECU trimmed the Knights' lead to four with less than 40 seconds remaining and had a chance to get within a possession, but Milon rebounded his own missed free throw and secured an extra possession for UCF. Dazon Ingram then made two free throws to preserve the win for the Knights.

The Knights jumped out to a 9-0 lead before ECU scored 12 unanswered points to take its first lead of the game. Five lead changes ensued before Green put UCF ahead for good with just over four minutes remaining in the first half.

The Knights led 27-24 at halftime and stretched their lead out to 10 in the opening 3:26 of the second half.

The Pirates dwindled their deficit down to two, only to see UCF roll off eight straight points pushing its lead back to double figures,48-38, with under 10 minutes remaining.

East Carolina Head Coach Joe Dooley     Opening statement     "Obviously very disappointed. We weren't turned up like we needed to be and I thought UCF was to begin and then we hit that stretch in the second half where we played as poorly as we have in a while. They took full advantage. We got ourselves back into the game and then we had some opportunities that we didn't take full advantage of, and that's disappointing."

On Milon rebounding his own missed free throw     "I've done this for a while and that's the first time I've ever seen a guy with no one on the free throw line get an offensive rebound when they miss a free throw. We work on free throw block outs every day. I've never seen that. I hope I never see it again. That's when you need to make sure you know how to win. It's the little details, because you're down four with the ball if you get that rebound. There was no one on the line, it is not that complicated. One guy gets the shooter, the other three go get the ball. There is a personal story about that with our players so that is what makes it so bothersome. It is something that has been emphasized."

On the team's effort     "Most college games you can play in your life is 160 if you play the national championship all four years. If you're not motivated to play 30 minutes of every game, then you shouldn't play. That is the way I feel about it. We played harder in practice yesterday than we played in the game today. We played hard for maybe 6 minutes of this game compared to our hour and a half practice yesterday which is really disappointing."

Sophomore Jayden Gardner     On rhythm of the game     "It was on and off. This game was a bunch of runs, they made a run early, we made a run, they made a run... At the end of the game we made our run a little bit too late. We couldn't keep up at the end and they ultimately came out with the W."

"We want to be able to start the game like that so we can control the game. We just didn't have it tonight."

Freshman Tristen Newton     On the Pirates' comeback attempt     "Towards the end, we were playing very well. When we watch the film, we'll see what we did wrong. How we played at the end is how we are capable of playing, so we're going to try to do that the whole game."

On the most frustrating part of tonight's loss     "Knowing that it was a winnable game. We didn't play to hard the whole game. We only played hard for like 15 minutes. If we played hard for 25 or 30 minutes, we could have won the game."