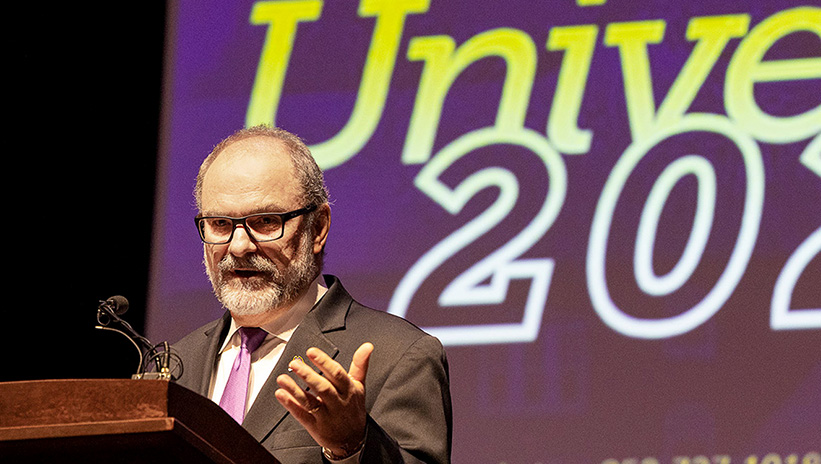 Interim Chancellor Ron Mitchelson presented his first State of the University address to the East Carolina University community Wednesday in Wright Auditorium, highlighting successes and challenges, and thanking faculty and staff for their dedication to the Pirate mission.

"The success of our students and the success of our region certainly are what we focus in on," he said, pointing to rankings from several national publications, including Princeton Review and U.S. News and World Report as recognition of the university's efforts in key areas.

"The U.S. News and World Report ranks us 39th nationally in providing social mobility for our students," Mitchelson said. "I love that - it's part and parcel of what we're about."

ECU engages students in high impact practices - undergraduate research, study abroad, living learning communities, internships and leadership opportunities - at a rate much higher than the national average, he said, with more than 75% of students participating in such activities beyond the classroom. 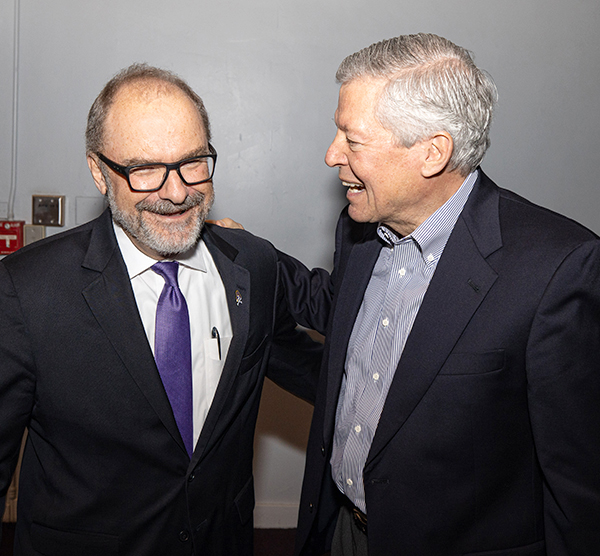 Mitchelson speaks with Steve Ballard, chancellor emeritus, after the address.
"These things really do ... influence student success, and we're good at it," he said.

ECU saw a decline in enrollment for fall 2018 and a bounce back in fall 2019, which Mitchelson credited in part to increased recruiting efforts in the Raleigh and Charlotte metropolitan areas, as well as changes in marketing including packages for admitted students with a No Quarter flag and improvements to Pirates Aboard! - a day for admitted students and their families to see what ECU has to offer.

Applications for the coming school year are up 21% and have already set a record, he said, but the university faces demographic headwinds as the declining birth rate that started with the 2008 recession begins to impact the number of college age students - a trend that is even more pronounced in eastern North Carolina than the state and nation.

The university is already working to address that challenge, Mitchelson said, by focusing on community college transfer students through Pirate Promise, an effort to develop co-admission agreements with North Carolina community colleges to streamline the transfer experience. ECU has agreements in place with 29 colleges with several more in the works.

ECU will also have to focus on enrolling distance education students to continue to serve the entire state, especially non-traditional students, he added. ECU's biggest period of growth came from 2000-2008 with an increase in online programs, especially at the graduate level in the College of Education, College of Nursing and College of Business. ECU is the statewide leader in distance education, Mitchelson said, and is better positioned to serve that population of students than any other university in the system.

Mitchelson highlighted the Main Campus Student Center, completed last year, and the Life Sciences and Biotechnology building, now under construction, as examples of the university's efforts to attract students. Future projects include adaptive reuse of several buildings in the warehouse district along 10th Street, a hotel on Reade Street in the Uptown district and a performing arts center. Administrators continue to push for a new medical education building on the health sciences campus.

Financially, Mitchelson said, the university has become more efficient in the past decade.

"We're doing a lot more with a lot less," he said, pointing out that state appropriation levels are still $10 million per year less than they were in 2011. Faculty and staff salaries have also remained relatively flat and have failed to keep pace with inflation, he said. "We have to take care of our people, and I make this case to everyone I can." 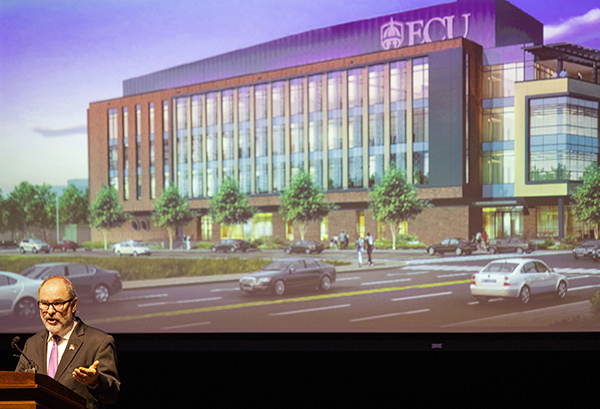 The Life Sciences and Biotechnology building, now under construction, will provide a space for collaborative research and education covering a variety of fields.
The university has delayed projects in an effort to reduce long-term debt, which is down $41 million, about 9%, over the last two years, and a working group has been established to address fiscal sustainability for athletics.

Mitchelson wrapped up his presentation by highlighting several recent success stories, including the Rise29 program, the new student center, Dr. Aleshia Hunt's statewide award for commitment to justice and equality in the workplace and community, a first-in-the-state treatment for patients with brain tumors, a student's $10,000 award in a nationwide cybersecurity competition, and Harley the beagle, who helps prevent illness at Vidant Medical Center by sniffing out C. diff contamination.

He encouraged all university employees to remain involved in the search for a new permanent chancellor and to participate in the UNC System's employee engagement survey.

Finally, Mitchelson said he is frustrated with the governance issues that have plagued ECU. "I dislike being on the front page of any newspaper for the wrong reason," he said. "We deserve better - YOU deserve better, and they will hear about it from me."