ECU Looks to Return to the Win Column Against UCF 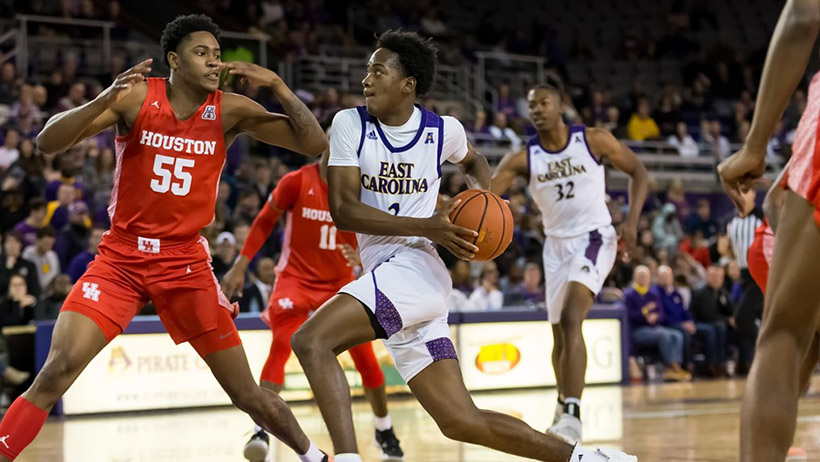 GREENVILLE, N.C.     East Carolina looks to put an end to UCF's seven-game series winning streak as the Pirates host the Knights on Thursday inside Williams Arena at Minges Coliseum, while snapping its brief two-game skid.

A year ago, Jayden Gardner turned in one of the all-time great performances in the history of ECU basketball, scoring 35 points and grabbing 20 rebounds against UCF with 7-foot-6 center Tacko Fall looming the entire game.

Fall is now with the Boston Celtics and the bulk of the Knights' 2019 roster that nearly reached the Sweet 16 is no longer in Orlando. The only players who returned with experience as Knights were Collin Smith, Frank Bertz and Ceasar DeJesus.

"Collin Smith is one of the better frontline players in our conference," ECU Head Coach Joe Dooley said. "He's versatile. DeJesus is experienced. They brought in a couple of grad transfers. They've got some balance."

Smith leads the Knights with 12.6 points, while DeJesus is scoring 10.8 points per game. Dazon Ingram, Darin Green Jr., Brandon Mahan and Dre Fuller Jr. are all averaging at least six points per contest. Collectively they accounted for more than 70 percent of UCF's scoring.

The Knights rank 11th in the league in scoring, but have held the opponents to an average of 66.4 points per game.

East Carolina has averaged only 65 points per game over its last five games.

The Pirates are hoping that Tyrie Jackson will be able to return to action after having to sit out the game at Temple while in concussion protocol.

ECU is also hoping to get another spectacular performance from sophomore Tremont Robinson-White, who poured in a career-high 21 points on 8-of-12 shooting against Temple, to assist Gardner.

Led by Gardner at 20.8 points per game, the Pirates' top four scorers are all underclassmen. Freshmen Brandon Suggs (9.1 ppg) and Tristen Newton (8.8 ppg) ranks second and third on the team in scoring, while Robinson-White is fourth at 8.5 points per game.

The foursome has started each of the last three games together along with freshman Charles Coleman.