Pirates Add One to 2020 Signing Class 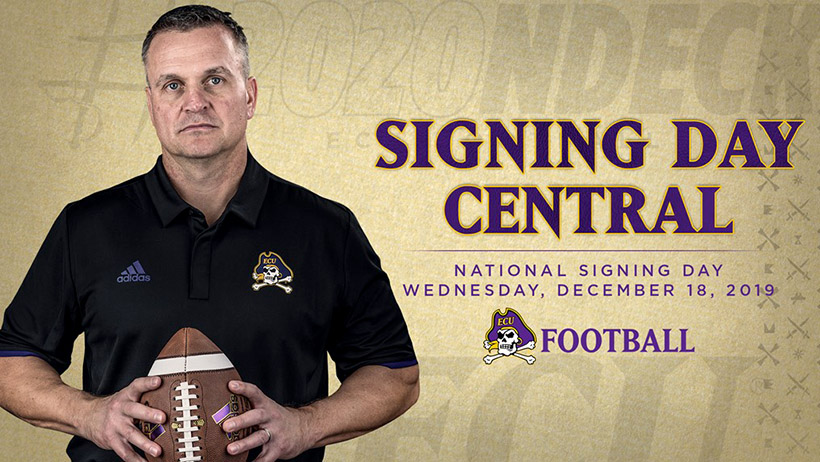 Kennedy, who helped Lackawanna (Pa.) College to a pair of postseason appearances as both a cornerback and safety, joins 25 previous signees who inked with ECU during the NCAA's early signing day on Dec. 18, 2019.

The Pirates' defensive unit now features 15 of the 26 overall newcomers with Kennedy becoming the sixth secondary performer on that side of the ball in this particular class. His addition will also push East Carolina's 2020 junior college transfer count to three, following defensive ends Henry Garrison and Elijah Robinson.

Junior College: Helped lead Lackawanna to successive postseason appearances during junior college career in Scranton, Pa. ... Served as the Falcons' starting safety for coach Mark Duda as a sophomore and collected 34 tackles (23 solo), 8.5 TFLs (-27 yards), 3.5 sacks (-19), four interceptions, nine pass breakups, 2 forced fumbles and one recovery ... Credited with playing a key role leading Lackawanna to the 2019 NJCAA National Championship Game before falling 24-13 to Mississippi Gulf Coast CC ... Booked a season-high seven stops vs. Snow College, added five each against Nassau CC and Mississippi Gulf Coast and four in contests vs. Georgia Military and Hocking ... Turned in strong finish, netting 18 tackles in the last five outings and seven pass breakups in the final four tilts ... Logged at least one TFL in seven of 11 games with a personal-best of 2.0 against Nassau CC and ASA College ... In addition to five tackles, a pair of TFLs and a forced fumble, earned Northeast Football Conference Player-of-the-Week honors on Oct. 28 after picking off two passes against Nassau CC and returning one 35 yards for a touchdown during the Falcons' 48-18 victory ... Other pass thefts came vs. ASA (40 yards) and Hocking (70) ... Recorded two or more breakups on four occasions ... Opened Lackawanna career as a cornerback in 2017 and was part of a 11-0 campaign that included a 17-10 win over No. 19 Western Arizona in the El Toro Bowl in Yuma, Ariz. ... Played in 10 games as a freshman, recording 26 tackles (19 solo), six pass breakups, three interceptions, one sack and one fumble recovery ... Credited with a season-best four tackles vs. Monroe and the N.J. Warriors ... Also had three stops each in contests against ASA-Brooklyn, Hocking and Georgia Military ... Recorded a pair of hits and picked off a pass (11-yard return) against Western Arizona in bowl action ... Recruited by Marshall, Massachusetts, Old Dominion, Arkansas State and South Alabama.

High School: A four-year football letterman for coach Roy Hall's Jeannette program that rolled to a combined 50-7 record from 2014 to 2017 ... Earned Mr. PA Football as a senior after helping lead the Jayhawks to the school's ninth WPIAL title and the 2017 PIAA 1A State Championship with a 16-1 record ... A two-way starter as a cornerback on defense and a slotback on offense ... Scored on a one-yard rush and contributed a pair of TD passes (22, 27-yarders) during JHS's 42-12 victory over Homer-Center in the title clash ... Returned an interception 50 yards for a touchdown and added a 19-yard scoring run to help guide the Jayhawks to an 18-7 first-round triumph over nemesis Clairton ... Also lined up at the cornerback and slotback position as a junior and was a part of a 14-1 campaign that included an appearance in the state playoff quarterfinals after a 30-20 win over Rochester in the opening round ... Played free safety on defense during sophomore campaign in 2015 as the Jayhawks posted an 11-3 mark after suffering a first-round playoff setback to Clairton ... Earned first varsity roster position as a freshman safety, helping JHS to a 9-2 overall mark ... Picked up additional letters on the basketball floor.